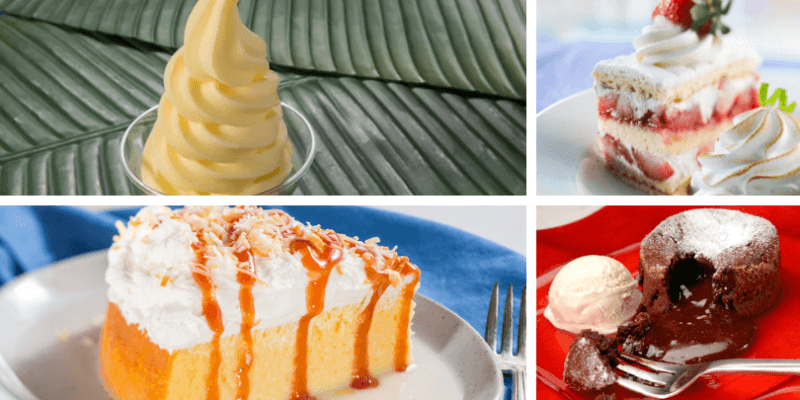 Whether it’s National Dessert Day or you’re just looking for something to satisfy your sugar cravings, Disney desserts are the perfect choice all year long. Guests head to Disney Parks around the world for all the sweet treats they can find — from classic and iconic to seasonal ones — and now they’re even being recreated at home. Not only are Disney Parks sweets being made at home, but dessert designs that are inspired by Disney movies and characters are taking over the internet, so here are a collection treats you can make based on palette desires.

Do you smell that? The scent of cinnamon sugar fills the air as soon as you step foot onto Main Street U.S.A. at Disneyland Park. Churro Carts are everywhere, and now that smell can fill your home if you make it from scratch with this recipe or pick it up from the local grocery store! The Churro craze has influenced Disney chefs to create more Churro recipes like the Churro Toffee and Churro Sundae!

If you’re over at Disney California Adventure, that might be chocolate you’re smelling coming from Pacific Wharf over at Ghirardelli’s. Pixar Pier though is where you’d want to be to find the Jack Jack Num Num Cookie! If you’re waiting for your group to get off the Incredicoaster or looking for something to continue the hype after you’re doing riding the attraction, this ooey gooey soft chocolate chip cookie will be right up your alley. Disney has even shared a recipe for the Jack Jack Num Num Cookie so you can sit in front of the oven with your family and watch them bake!

That smell of cinnamon isn’t missing from Walt Disney World, though, because if you’re at Magic Kingdom you’ll want Gaston’s Famous Cinnamon Roll from Gaston’s Tavern. While you’re there, maybe even try the Grey Stuff — we hear it’s delicious! These desserts deserve a drink and Gaston’s sidekick has got your back with LeFou’s Brew. Well, you can recreate this sweet menu with recipes for Gaston’s Famous Cinnamon Rolls, Grey Stuff, and LeFou’s Brew.

One of the most popular treats at Disney World comes from EPCOT’s Flower and Garden Festival and that’s Frushi! This is an easy copycat recipe to recreate the Frushi from EPCOT, but you can just as easily make it more your own with your favorite fruits. EPCOT is where festivals happen throughout the year which has some delightful dessert options to make at home like another Flower and Garden Festival recipe, Berry Buckle, Pop’t Art from the Festival of the Arts, and Tres Leches Cake from the Food and Wine Festival. Don’t forget about the, just as delicious, non-festival desserts too like the Strawberry Shortcake from Sunshine Seasons in the Land and Maple Creme Brûlée from Le Cellier’s Steakhouse.

The Dole Whip is popular at both Disneyland and Disney World, and if you’re heading to either of those Disney Parks, check out this complete guide to Dole Whips! There are options to make this the way you like Disney official with dairy, Dole’s official non-dairy Dole Whip Float, or even a Dole Whip cupcake.

Don’t leave out Disney Resort hotels when you’re craving Disney Parks sweet treats. If you’re a Guest staying at one or have time for a visit be sure to stop by Spyglass Grill at Disney’s Caribbean Beach Resort for Cream Cheese and Guava Stuffed French Toast or The Polynesian Resort for some POG juice at Ohana. Linked are copycat recipes so you can make this a stay at home Disney vacation or Disney staycation!

Don’t leave Ohana just yet, if you like baked goods because Ohana’s bread pudding because this is one that you don’t leave behind. Mickey Mouse shaped macarons have made an appearance on land and by sea with Disney California Adventure’s Food and Wine Festival Chocolate Caramel Peanut and Disney Fantasy’s Sweet Raspberry.

Whichever Disney Property you’re one, there’s a cupcake for you and this cupcake crawl will help you find some of the most fun Disney ones! While we’re on the topic of cakes, try your hand at making the Black Forest Cake from EPCOT’s Biergarten, California Grill’s Chocolate Lava Cake, Chocolate Canadian Club Cake from Le Cellier’s, Disney’s Hollywood Studios Chocolate Cupcakes With Hazelnut Buttercream, or Disney Riviera Resort Raspberry Caramel Chocolate Cake.

Comments Off on Disney Desserts Inspired by Disney Parks, Movies, and Characters!