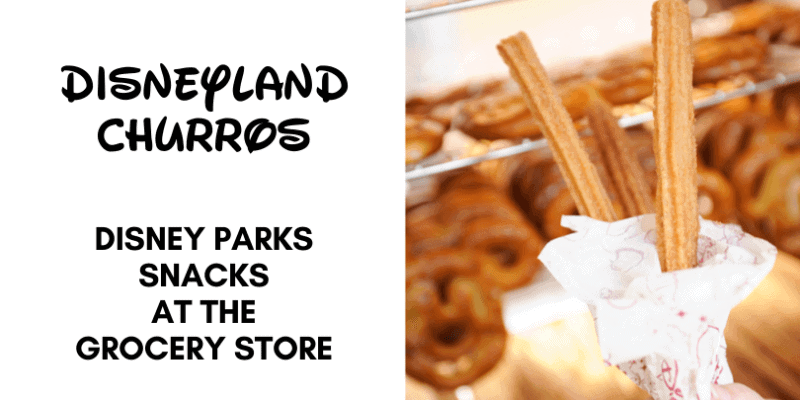 When you walk into the Disney Parks, you’re fully immersed into the atmosphere of the Happiest Place on Earth.  There’s the sights of Disneyland magic, the musical stylings of the Dapper Dans or the Disneyland Band, the emotions you get when you see Mickey Mouse and his friends, and the smells of all the Disney snacks you’re about to devour.  What is one of the most nose-catching smell at the Disney Parks?

Is it popcorn?  It is one of the most strong smells at the Disney Parks, but so are churros!  You don’t even need to walk into Disneyland or Disney California Adventure to be able to smell churros.  Walking around Downtown Disney, you can smell the aroma of the churro cart there too.  It’s not just any churro though —  there is something special about the Disneyland churros that sets them apart from the rest.

Disneyland Churros Outside the Parks

So what happens when you’re craving Disneyland churros, but you aren’t anywhere near Disneyland?  Well, you could make make them at home and there’s a great recipe for those, or you could could buy them at the grocery store!  You heard me right!  As you can see from the post below, it isn’t confirmed, but the taste could be pretty close.

Smart and Final is a bulk store which supplies many businesses and restaurants, so it wouldn’t be a surprise if the brand is the same as (or very similar to) the ones sold at Disneyland.  Also, Smart and Final is only located on the West Coast which could also be why Churros are one of the more popular Disney treats at Disneyland Resort rather than Walt Disney World (you can also get churros at Disney World, but the Disneyland ones are by far superior).  The brand of churros is Tio Pepe’s Churros Pastry Stix.  But for those of you not on the west coast, don’t fret!  They have an online store.

Churro Recipe for at Home Activity

You can definitely to make Disneyland churros, Churro Bites, or even Churro Mickey Waffles from scratch at home with your family.  If you buy the Tio Pepe’s Churros, you can still spice them up with season favorite flavors other than the classic cinnamon sugar.  Churro Bites are good as a topping for vanilla ice cream.  If you want to top it with a dipping sauce, hot fudge is super delicious with churros.

It would be a fun activity to decorate part of your kitchen to look like the famous Churro Carts that you see all around Disneyland.  They’ve got a fun, yet vintage, look to them that would be good decor for date or family night.  Be sure to take photos and share them with your friends!

Comments Off on Your Local Grocery Store is the Easiest Way to Get Disney Churros Outside the Parks!