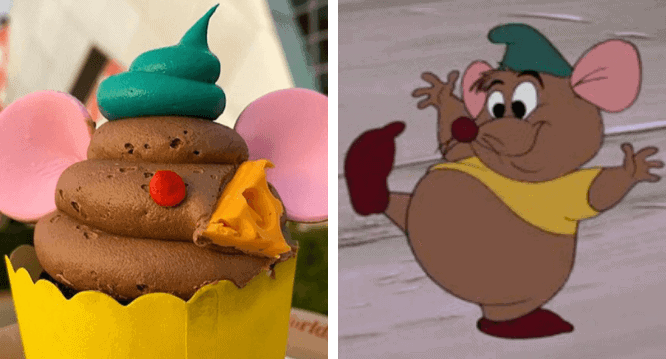 RAKE A REASY, CLUCK CLUCK! Gather your corn and cheese snacks, but make room for this adorable Gus Gus Cupcake at Walt Disney World Resort as your dessert! With the 70th anniversary of Cinderella being celebrated, the cupcakes dotting the Disney Parks have (up until now) been in tribute to the original title character. Now our favorite sewing mouse gets his turn in the spotlight!

This adorable little bundle of dessert can be found at Disney’s All-Star Music Resort in the food court. Chilled in the dessert case, it’s a Chocolate Cupcake with Peanut Butter Buttercream frosting on top. The hat is simply vanilla blue buttercream frosting dolloped artfully on top. The ears are made of fondant and the cheese icon is made of white chocolate.

The best thing about the Gus Gus cupcake? The surprise marshmallow core. Perfectly sweet and surrounded by chocolate cake, the dessert is well balanced. The Gus Gus Cupcake is $5.99 or one snack credit on the Disney Dining Plan. We first saw the treat on a post by @tradzak on Instagram.

If you’re a Disneybounding fan, you’ll love that the Disney kitchen staff upped their game by “dressing” the cupcake as our favorite character. We haven’t seen food Disneybounding this good since the Hei Hei Dole whip!

There are a ton of celebratory Cinderella cupcakes this season, so keep your eyes out for the Pumpkin Cream cupcake at Disney’s Contemporary Resort. It’s got a Pumpkin cream core surrounded by fluffy yellow cake and topped with a buttercream pumpkin. Don’t be late for this one!

At Disney’s Polynesian Resort, Cast Members are serving up a Cinderella Slipper cupcake. The top of the cupcake has sugar crystals and edible glitter sprinkled on the bright blue frosting while inside are whole blueberries! Each of these cupcakes also retails or a price of $5.99 or one snack credit.

Comments Off on Check out this Flavorful Disneybounding Gus Gus Cupcake!