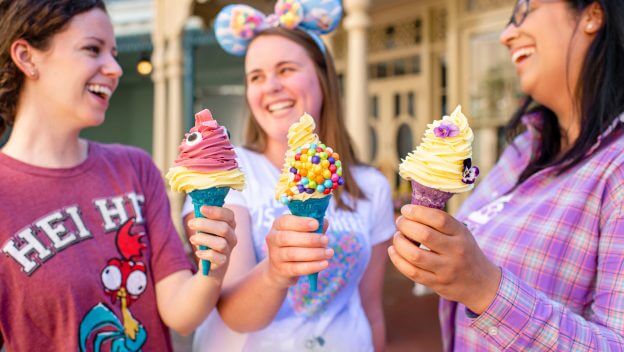 We can never resist a cute ice cream cone (see the Maleficent cone from Storybook Treats), and these new options are definitely Instagram-worthy. All three themed cones will be available starting February 24. First up, there’s a Hei Hei Cone, inspired by Moana’s feathered friend. This treat features a blue sugar cone topped with raspberry soft-serve, pineapple Dole Whip, sugar eyes, and sour candy, and you can find it at Aloha Isle in Adventureland.

At Storybook Treats, there’s the Lost Princess Cone. Inspired by Rapunzel, this purple cone comes topped with lemon soft-serve and lovely edible flowers. Over at Auntie Gravity’s Galactic Goodies in Tomorrowland, pick up the “Adventure is Out There” cone inspired by Disney-Pixar’s “Up.” This blue sugar cone is topped with mango soft-serve and a candy balloon piece.

Mardi Gras is on March 5, and if you’re celebrating in the park, visit Liberty Square Market to enjoy the Frog Prince Whoopie Pie. Inspired by “The Princess and the Frog” and its New Orleans setting, this cinnamon whoopie pie comes with graham cracker icing, sprinkles, and a chocolate frog. This treat is available for a limited time.

Mickey and Minnie’s Surprise Celebration is in full swing at the park, and a few new sweets are joining the party. At Sleepy Hollow, you’ll find the Mickey and Minnie Waffle Sundae, which features Mickey and Minnie-shaped waffles and a scoop of vanilla ice cream topped with chocolate sauce, whipped cream, sprinkles, and a cherry.

At both Columbia Harbour House and Tony’s Town Square Restaurant, you can treat yourself to Mickey and Minnie Whoopie Pies. These red velvet whoopie pies come filled with cream cheese icing and are topped with chocolate decorations. At Tortuga Tavern, you’ll see the return of the Mickey Confetti Pretzel, which is dipped in marshmallow fluff and topped with confetti sprinkles.

All three sundaes, the Mickey and Minnie Whoopie Pies, and the Mickey Confetti Pretzel are available starting March 1. The month of March also includes St. Patrick’s Day, and Magic Kingdom is celebrating with Casey’s Corn Beef Hash Dog at Casey’s Corner. March’s Hot Dog of the Month is topped with crispy potatoes, corned beef, cabbage, and a Blarney sauce drizzle.

In addition to all these new offerings, Magic Kingdom also has new Mickey and Minnie-inspired ice cream containers to make your desserts even more magical. You can now find these themed cups at various locations throughout the park.