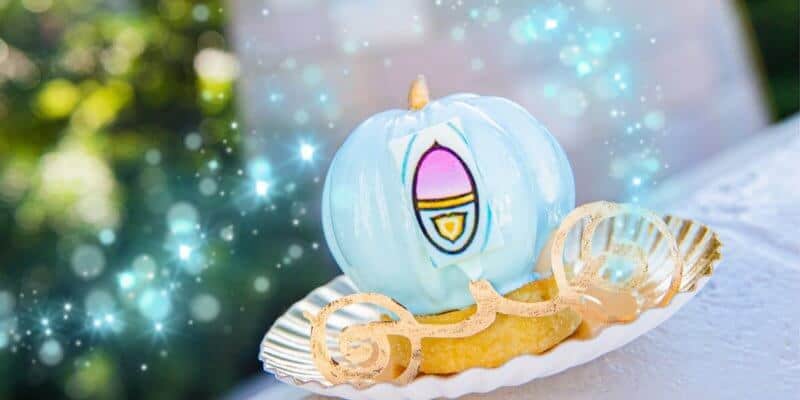 Can you believe Disney is celebrating the 70th anniversary of Cinderella?

The 1950 Disney animated classic follows the story of a wicked stepmother and two jealous stepsisters who have kept Cinderella in rags and as their slave. Cinderella is forced to clean the house, do the dishes, fold the laundry, and everything else under the roof.

When she realizes that she has no chance of attending the royal ball, which everyone else in town is attending, her fairy godmother magically appears and bibbidi-bobbidi-boo! Cinderella is suddenly transformed into a beautiful Princess, but only until the clock strikes midnight.

This classic fairytale has turned into a beloved story that every little girl looks up to and is inspired by. 70 years later, Walt Disney World is celebrating this Cinderella milestone in a few ways, including selling this adorable Bibbidi Bobbidi Boo Cake, which will be available for purchase starting February 1 at Main Street Bakery in Magic Kingdom Park.

Other Ways Disney World Is Celebrating

Prince Charming Regal Carousel, Seven Dwarfs Mine Train, The Many Adventures of Winnie the Pooh, Peter Pan’s Flight, Princess Fairytale Hall, “it’s a small world,” Mad Tea Party and Under the Sea: Journey of the Little Mermaid are all included on this list.

Another way Disney is celebrating is by offering special Cinderella themed food and drinks, such as the Bibbidi Bobbidi Boo Cake, as well as offering enhancements to the all-you-care-to-enjoy breakfast, located at Cosmic Ray’s Starlight Café from 8 am – 10 am.

Disney Early Morning Magic requires a separate reservation and ticket, which is $89 for adults and $79 for children. (And standard theme park admission is required.)

This special admission is limited, so make sure to book your reservation as soon as possible at the Walt Disney World Resort website.

If you want to visit Walt Disney World on your next family vacation to try Blaze Pizza, but aren’t sure where to begin planning, then don’t hesitate to reach out to our friends over at the Authorized Disney Vacation Planners at Academy Travel for a free quote.