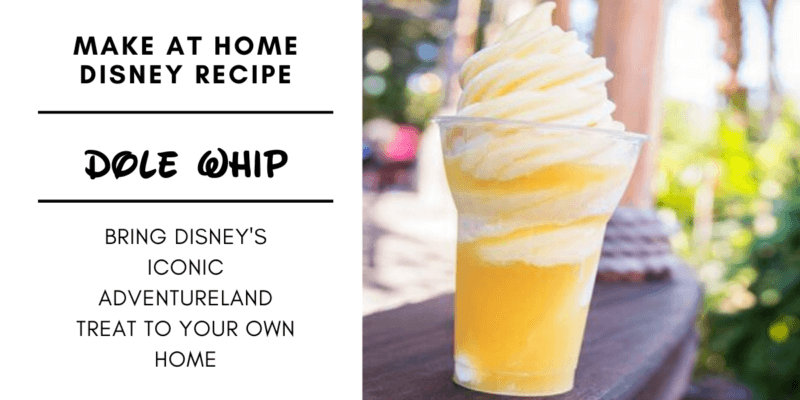 Get ready, Disniacs! Disney Parks has a very special treat for you!

The official recipe for a Dole Whip-style frozen Pineapple treat has just been shared on the Disney Parks apps!

Whether you have the My Disney Experience app for your frequent trips to the Walt Disney World Resort or the Disneyland app, you can now spread some Disney magic in the form of the delicious and iconic Adventureland pineapple float.

A single serving of this Frozen Pineapple Treat requires…

Again this is for a single serving. So you will need more if you are going to be making this for your little princes, pirates, princesses, or whacky Disney characters. You will also need a blender and a star-tipped pipping bag.

Then, all the ingredients into a blender and blend until you have a nice thick smoothie look.

Now You’re Cooking with Disney Parks is just the latest way Disney is reaching out to its loyal fans to spread the magic during the park closure. Disney has already begun to stream some of its beloved park shows, as well as provide some daily “Disney Magic Moments.” Disney Parks also makes it clear that there will be more amazing park recipes to come! So turn on those app notifications and keep your eyes open for the treats that come next!

We at Inside the Magic has also attempted to spread the magic by sharing some Disney recipes you can make at home. You can learn some of the those by clicking any of the links below:

Are you excited to make your first Dole Whip? Where does DoleWhip rank among your favorite Disney Park treats? Let us know in the comments!