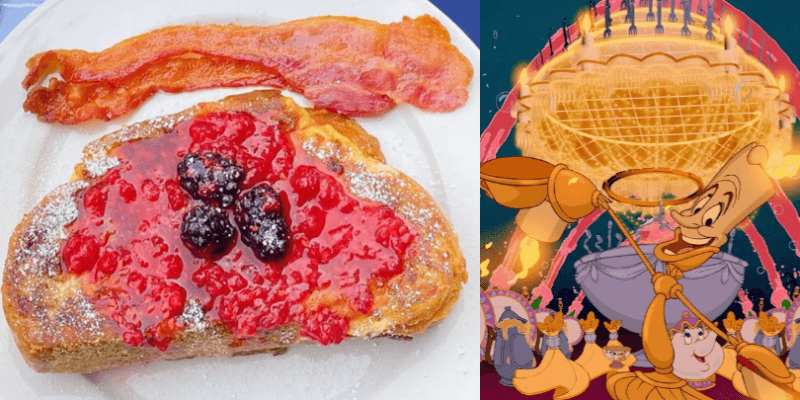 Sometimes we all need to escape reality for the best parts of our fantasy. Disneyland is home of Fantasyland where you can go on a flight with Peter Pan, float on a boat around the globe because it’s a small world, jump into your favorite storybook, spend time with Dumbo the flying elephant, and more.

Traveling around Fantasyland makes me hungry and I need food! As many do, my fantasy is to have sweets for breakfast! Actually now that I think about it, any Disneyland breakfast food will do the trick.

Fantasyland has just the restaurant with that breakfast menu and that’s Red Rose Taverne. When the live action Beauty and the Beast premiered in 2017, Disneyland reinvented Pinocchio’s Village Haus to be a Beauty and the Beast-inspired tavern. Though we all thought it would be a limited time promotion, it’s still around and permanent, and it’s got the perfect breakfast for those with a sweet tooth.

This recipe is inspired by Red Rose Taverne’s Stuffed French Toast. It’s got the recognizable brioche french toast with sweet and savory flavors in fluffiness and some added some fresh notes of a berry compote. It’s typically served with a side of hickory-smoked bacon or sausage.

We do need some sustenance or else we’ll be chef turned quickly into a professional napper soon after!  Add in some scrambled eggs and potatoes if you want to make it a serious breakfast platter.

Red Rose Tavern’s homemade Stuffed French Toast!!!⁣ ???????????????⁣ Staying home means more time to enjoy the most important meal of the day, and WOW was this one delicious!!! We’ve been playing around with trying to recreate a bunch of Disneyland’s breakfast items, and we promise you this recipe won’t disappoint.⁣ ???????????????⁣ Swipe ➡️ to watch a step by step video tutorial and to view the ingredients!⁣ .⁣ .⁣ .⁣ #disney #frenchtoast #stayhome #disneyfoodblog #disneylifestylers #disneyland #redrosetavern

This dessert screams “Be Our Guest!”  As Lumiere sings, “Try the grey stuff. It’s delicious!” It’s a very welcomed flavor of a red velvet cake with a raspberry filling covered in a  white chocolate mousse.  It’s soft like whipped cream, better yet, a cloud.

LeFou’s Brew has very similar flavors of apple, mango and passion fruit. This one is a frozen drink with a hint of toasted marshmallow. You can find it located at Disney World’s Fantasyland inside Gaston’s Tavern which is where they’re known for Gaston’s cinnamon rolls.