Your Guide to Disney Dole Whips - Inside the Magic 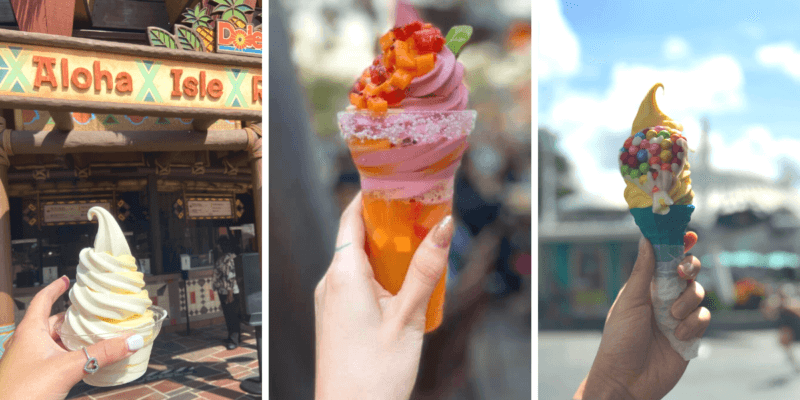 Dole Whip is a favorite snack for so many Disney Parks Guests. It can be a must-eat treat on a hot day, and especially if you’re traveling to Disneyland Resort or Walt Disney World Resort, this sweet soft-serve dessert can be enjoyed year-round in the California and Florida sun.

But even die-hard Dole Whip fans can’t resist the temptation of trying every Dole Whip flavor available. Whether you’re a first-time Disney Park visitor or you just want a handy guide for where to access your favorite snack, here’s where you can find every flavor of Dole Whip on Disneyland and Disney World property.

What is Dole Whip?

Dole first sponsored the Enchanted Tiki Room in Adventureland in 1986, bringing Dole Whip to the Disney Park for the very firs time. Since then, Dole Whip has been a staple for Disney fans. Since 2013, the official Dole Whip at the Disney Parks have been made with vegan ingredients, and the frozen treat has always been gluten-free, making this snack irresistible to nearly every Disney Guest.

You can find the iconic treat throughout Disneyland and Disney World property, and we have even shared some recipes for making Dole Whip at home.

But where is Dole Whip served? This iconic treat is sold t locations all across Disneyland Resort and Walt Disney World Resort. Many believe a magical vacation isn’t complete until they get a taste of the pineapple soft serve (or a Dole Whip float, the frozen snack served atop pineapple juice). Below you will find out guide to everywhere you can find Dole Whip at the Happiest Place on Earth and the Most Magical Place on Earth. We have even included a recipe at the bottom of this article so you can make Dole Whip at home!

Where can you find Dole Whips at Disneyland?

Disneyland is where the Disney Dole Whip craze started. So of course there are a few locations at the Happiest Place on Earth where you can find this frozen snack. Here are all of the flavors of Dole Whip served at Disneyland Resort.

Note: Although these are all of the places we have found Dole Whip as of summer 2020, it’s important to remember that Disney periodically changes the menus and food offerings at the theme parks. Sometimes, Disneyland Resort offers seasonal Dole Whip flavors or treats, so keep that in mind for your next visit.

By far the most popular flavor, pineapple Dole Whip is served at the following locations:

We were first introduced to lemon Dole Whip at the Adorable Snowman’s Frozen Treats stand on Pixar Pier, which opened back in 2018. Here, you can order a Pixar Pier Parfait, a non-dairy lemon soft serve and blue raspberry frozen beverage. The location also serves the It’s Snow-Capped Lemon, also a non-dairy lemon soft serve with a “snow-cap” of white chocolate. And of course, you can order the plain lemon Dole Whip on its own here or in a swirl at the Tropical Hideaway.

Keep in mind that the Tropical Hideaway in Adventureland also serves delicious Loaded Dole Whips and creative Dole Whip floats. You can often order a mix of multiple flavors for your Dole Whip at this location. Why not try them all?

Where can you find Dole Whips at Disney World?

Because Walt Disney World Resort is a much bigger Disney property than Disneyland Resort, there are actually many more places to find the many different flavors of Dole Whip. We’ve broken down where to find each flavor of Dole Whip on Disney World property.
Note: Although these are the various flavors of Dole Whip that we have found at Walt Disney World Resort as of summer 2020, it’s important to note that these are subject to change. Disney periodically offers seasonal Dole Whip flavors and treats at the theme parks. Keep in mind that on your next visit, you may find all of these Dole Whips and more.

Of course, we have to start with the Dole Whip that started it all: the classic pineapple soft serve. You can find it at the following locations: 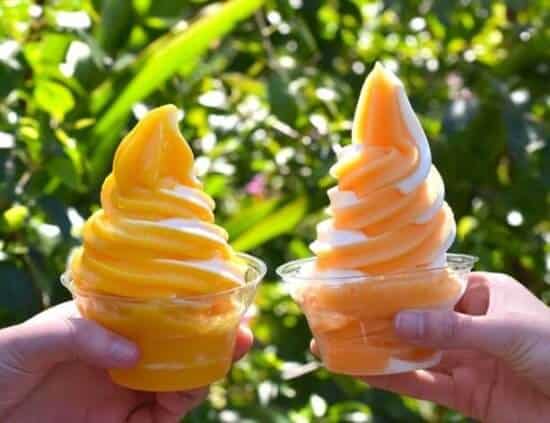 If you’re more of an orange fan, check out the Dole orange soft serve at Sunshine Tree Terrace in Adventureland at Magic Kingdom. This location serves both the Citrus Swirl (frozen orange juice swirled with vanilla soft serve) as well as the orange Dole Whip, so be sure to specify which one you’d like when ordering.

Raspberry-flavored Dole Whip has got to be high on our list of the top sweet treats at Walt Disney World. This flavor is only available at Aloha Isle in Adventureland at Magic Kingdom, and it can be ordered on its own or as part of the Hei Hei cone, soft serve in the shape of the hilarious rooster sidekick from Moana.

If you’re looking for a frozen treat that’s a few steps up from frozen lemonade, then lemon Dole Whip is for you. We first saw this become available on the west coast at Disneyland Resort at Adorable Snowman Frozen Treats on Pixar Pier, so we’re super excited that it’s made its way to the Magic Kingdom. You can find this Lost Princess Cone with lemon Dole Whip soft serve at Storybook Treats in Fantasyland at Magic Kingdom.

Also at Storybook Treats is the lime-flavored Dole Whip soft serve, which we’ve seen themed after a variety of characters. Available throughout the year as the Maleficent Cone, Tinker Bell Cone, and Peter Pan Float, the lime Dole Whip is absolutely as refreshing and delicious as it sounds. Think of it as key lime pie in a cone. You can also find lime Dole Whip featured in the Te’Fiti Cone at Pineapple Lanai at Disney’s Polynesian Village Resort.

Eating mango Dole Whip is like taking a trip to a tropical paradise…right in the middle of Tomorrowland. This mango-flavored soft serve can be found at Auntie Gravity’s in Magic Kingdom, and it’s probably our favorite of the character-themed cones. But be warned: although the UP! house is cute for pictures, it’s quite heavy, so don’t be surprised if it falls off your cone as you’re eating.

Markerplace Snacks at Disney Springs also serves Dole Whip nachos! These are absolutely delicious and a must-try in the summer. Read more here.

Related: Must Try Classic Disney Snacks On Your Next Disney Vacation

Book a Disney Trip to Try Dole Whip Yourself!

Want to book a Disney vacation so you can try Dole Whip for yourself? Maybe you’ve never tried the frozen treat that is Dole Whip pineapple soft serve, or maybe it’s been a while since you got to visit Disneyland or Disney World and you can’t wait to go back.

Whether it will be your first or 100th time trying Dole Whip on your Disney vacation, let the Authorized Disney Vacation Planners plan out the best Disney trip possible for you. They are experts in all things Disney Parks and can help guide you through the Happiest Place on Earth and the Most Magical Place on Earth, while also providing tips and tricks for where to get Dole Whip on your upcoming trip.

Click here to get in touch with Academy Travel — your next bite of Dole Whip is only a click away!

If you can’t make it to the Disney Parks anytime soon to grab Dole Whip on Disney property, not to worry. As we shared above, there are so many Dole Whip recipes

We have included two Dole Whip recipes below: one is a version that contains ice cream, and another is dairy-free. Depending on your taste, dietary restrictions, or what ingredients you have on hand, try whichever recipe is right for you!

Note: Although this is a copycat recipe provided by Disney, this is not the recipe for the Dole Whip served in the theme parks, so it will likely taste different.

Note: Many say that the official Dole recipe tastes similar to the treat served in the parks.

Which flavor of Dole Whip is your favorite? Which soft serve flavor do you hope to try next? Is there a Dole Whip frozen treat that you have found that we didn’t include in this guide? Let us know in the comments!