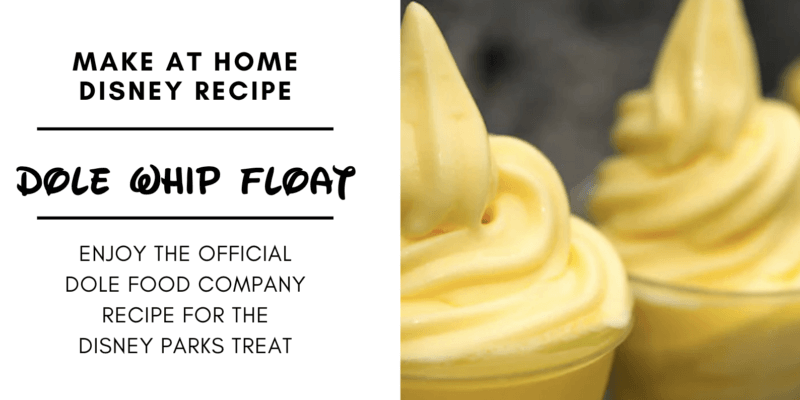 The Dole Whip is indisputably one of Disney Parks’ most popular treats. The pineapple whip dessert has something of a cult following (there’s even a special Hawaiian version at Aulani!).

On Tuesday, Disney shared a make-at-home Dole Whip recipe on the Disneyland and Disney World apps, igniting a frenzy among fans. Now, it turns out the Dole Food Company, whose pineapples are used to make the Disney Parks food, has their own official Dole Whip recipe.

This version of the Dole Whip float is dairy-free, just like the ones in Disney theme parks! As per Dole’s website, here’s what you need to do:

This five-ingredient pineapple float is so easy to make, you might find yourself “whipping” one up every day.

If you’ve been missing Aloha Isle at Disney World’s Magic Kingdom, this is the perfect substitute for their Dole Whip float! We recommend garnishing with a tiny umbrella for a truly tropical feel. You can also add a scoop of vanilla ice cream to make it even sweeter.

If you want to bring more Disney Parks recipes to your kitchen, check out these delicious treats. LeFou’s Brew was an instant hit after the Disney World Fantasyland expansion and, now, you can make it at home!

We also have the official Disney Parks churro recipe. You can even mix it up and create your own churro flavors using these instructions as a foundation.

Are you going to try the official homemade Dole Whip float or other Disney parks food at home? Tell us in the comments!