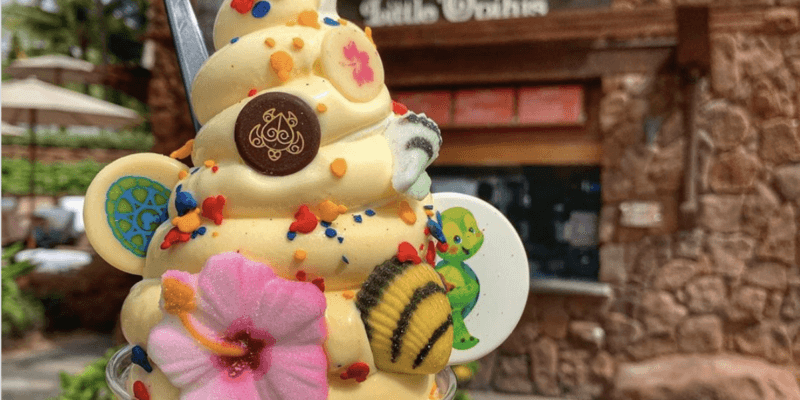 If you ask me, there’s nothing better than a Dole Whip…except maybe a Dole Whip in Hawaii. If you agree, you’re in luck! Disney’s Aulani resort has gotten their own jazzed-up version of the popular pineapple soft serve.

Available at Little ‘Opihi’s on the property’s beach path, this Hawaiian version of the classic Dole Whip features all sorts of extras. Called the ‘Olu Sundae, the sweet treat certainly lives up to it’s name (“‘Olu” means “cute” in Hawaiian!”).

Dole whip in Hawaii melts faster than you can say Dole Whip!⁣ ⁣ You can find this special not on the menu treat at Disney Aulani in Hawaii. Ask for it to be in a cup to make it #glutenfree ⁣ ⁣ #aulanidisneyresort #dolewhip #littleopihi #glutenfreedisney #glutenfreefriendly

It has an edible molded flower and shell, adding to its tropical aesthetic. Topped off with blue and orange sprinkles, this Aulani Dole Whip might be the most Instagrammable Disney food item of the moment! Request your sundae in a cup instead of a cone if you’re gluten-free.

It also features a sugar disc that showcases the adorable ‘Olu the Turtle, who is just as cute as his name suggests. If you’re not familiar with ‘Olu’s backstory, he’s a ukulele-playing turtle friend of Duffy the Bear who now makes his home at Aulani.

The official story goes, “As Mickey and Duffy sailed the islands on a quest to find the perfect birthday present for ShellieMay, rhythmic sounds of an ‘ukulele called to them over the ocean, leading them to a cozy cove and to ‘Olu, a kindhearted turtle playing happy music.

‘Olu smiled and shyly greeted Duffy, “I play my ‘ukulele to make songs of love. Want to sing with me?” ‘Olu strummed a beautiful song for his new friends. “That will be the perfect present for ShellieMay!” said Duffy excitedly. Off to the party they went, singing the special song together for their birthday friend.”

With summer just around the corner, there’s no better time to plan a trip to Aulani Resort and Spa! Let the experts at Academy Travel help you put together a stress-free vacation for you and your family. Whether it’s your first trip to Aulani or your fifth, your agent will make sure you have an unforgettable trip!