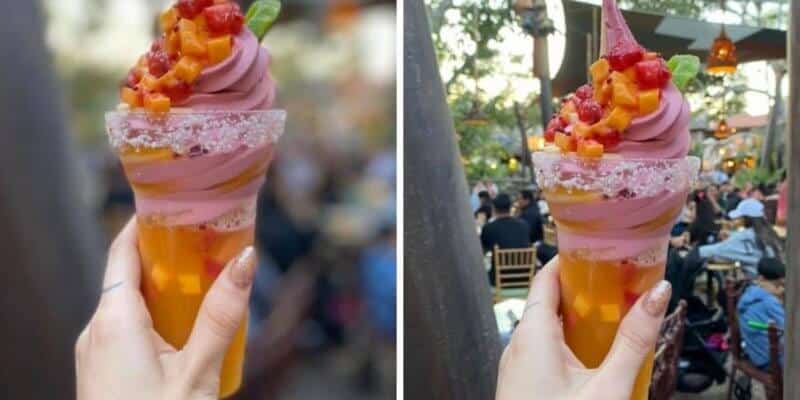 Calling all foodies — Get ready for this. Disney Parks has just released yet another new DOLE Whip®, perfect for all palettes.

If you are a lover of P.O.G. Juice (Passion Fruit, Orange, Guava Juice) this is a DOLE Whip® you will have to try on your next Disney vacation.

Head on over to the Tropical Hideaway located inside Disneyland and get your hands on this Raspberry Lemon DOLE Whip® Float.

This new Disney DOLE Whip® consists of a Raspberry Lemon DOLE Whip® soft serve, which is then topped with a candied Kiwi sliced, diced mangoes, and strawberry pieces. The rim of the cup is coated with toasted coconut bites. And the float part is the fan favorite P.O.G. Juice!

P.O.G. Juice can be found at several different Disney Dining locations including Ohana in Disney’s Polynesian Village Resort or at Garden Grill at Epcot at Walt Disney World Resort.

But you can find this new DOLE Whip® at the Tropical Hideaway in Disneyland Park.

Related: The Blue Hawaiian Dole Whip Will Have You Signed Up for runDisney’s Next Marathon

Disney Parks has been serving up several different DOLE Whip® flavors over the past few months. The “I Lava You” DOLE Whip® is now available at the Pineapple Lanai at Disney’s Polynesian Village Resort in Walt Disney World Resort. You can read more about this DOLE Whip® here.

If you need help planning your next Disney vacation, don’t hesitate to reach out to our friends over at the Authorized Disney Vacation Planners at Academy Travel for a free quote today!

Are you a lover of P.O.G. Juice? Will you be trying this new DOLE Whip® on your next vacation? Let us know in the comments.