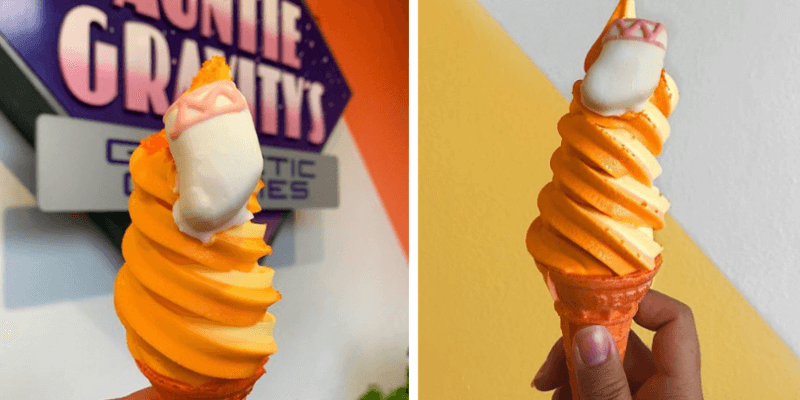 An all-new Disney movie-inspired Dole Whip treat has just arrived at Walt Disney World’s Magic Kingdom, and this one is themed after one of the best scenes from Pixar’s “Monsters Inc.” If you’re a fan of the film, you remember that iconic moment when a monster was “contaminated” with a child’s sock while working on the Scare Floor and it was called a code “2319.” Well, this new Dole Whip cone looks just like that monster, complete with a sock!

The newest Dole Whip treat is a mango-vanilla swirl in an orange cone, topped with sparkly orange sugar sprinkles and a sugar cookie designed to look like a sock. Anyone who has tried the mango-flavored Dole Whip can probably agree that it’s one of the best flavors around, so we’re definitely excited that this new treat incorporates the refreshing mango taste with classic vanilla. We can’t get over how cute this cone is, and like so many of the other delicious treats in Walt Disney World these days, it’s perfect for photos!

Take a look at some of these Disney fans’ pictures of their 2319 cones below!

2319!!! We have a 2319!!! ?? • NEW ICE CREAM CONE ALERT! • The 2319 over at Auntie Gravity’s in Tomorrowland. It’s a Mango Cream & Pineapple Dole Whip swirl topped with orange sugar sprinkles and a sock sugar cookie. Today was crazy hot and this was so refreshing and delicious! Since I love everything mango, I knew this would be my new favorite ice cream! I definitely recommend ??

You can find this new “Monsters Inc.” Dole Whip cone at Auntie Gravity’s Galactic Goodies in Tomorrowland in Magic Kingdom. But take our word for it: the sock-shaped cookie is adorable to look at, but it can easily slip off the Dole Whip and fall on the ground, especially as your treat melts in the summer heat. Take that Instagram photo quickly and then enjoy the dessert!

Want even more delicious desserts on your next trip to Walt Disney World? Check out our latest guide to all the neon Imagination Pink treats now available at Disney Springs!

What’s your favorite flavor of Dole Whip? Let us know in the comments!