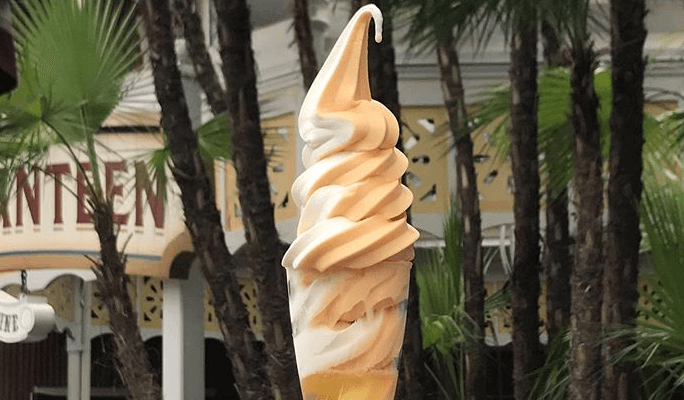 If you’re like us, you can never get enough Dole Whip. The iconic Disney dessert is available all over Walt Disney World, and our Disney vacations are incomplete without this tasty treat. And now that the summertime heat is in full swing, Magic Kingdom is serving up an all-new version of the classic snack: the Dole Whip FOMOsa.

Yes, that’s right. It’s not exactly a mimosa, but not entirely a Dole Whip either. This new dessert combines the cuteness of a mimosa with the refreshing elements of a Dole Whip, and it’s probably the most Instagram-worthy dessert at the Magic Kingdom right now. The name “FOMOsa” means “FOMO” (fear of missing out) mimosa. So this treat is inspired by the elements of a mimosa (champagne and orange juice), but it has sparkling apple cider and orange Dole Whip instead. You can order the Dole Whip FOMOsa with orange Dole Whip or the orange-vanilla swirl, so you can truly customize the drink to fit your personal dessert preferences. It’s even served in a champagne flute. And to be honest, it sounds even more delicious than your typical mimosa served at any weekend brunch. What could be better?

I spilt this everywhere?

You can pick up the Dole Whip FOMOsa at Sunshine Tree Terrace, the location known for serving orange Dole Whip and Citrus Swirl in Adventureland in Magic Kingdom at Walt Disney World. It costs $5.99, which is the pretty average cost for a frozen Disney treat like this one.

Brand new FOMOsa from Sunshine Tree Terrace. Citrus swirl with sparkling apple cider. Same price ($5.99) as the much larger floats but that works for me as I usually have to throw out a lot of the larger sizes. Delicious! #disneyfood #disneyfoodies

There are plenty of other varieties of Dole Whip available, as well, so don’t worry if sparkling apple cider isn’t your thing. Magic Kingdom and other locations throughout Walt Disney World have been serving up some frozen deliciousness in the form of different Dole Whip flavors for some time now. Plus, if alcoholic Dole Whip is more your style, you can even get it spiked with rum at certain locations. Check out our Dole Whip guide here for where to find all of the other Dole Whip flavors at Walt Disney World.

Want to try the Dole Whip FOMOsa on your next Disney trip? Let us know in the comments!