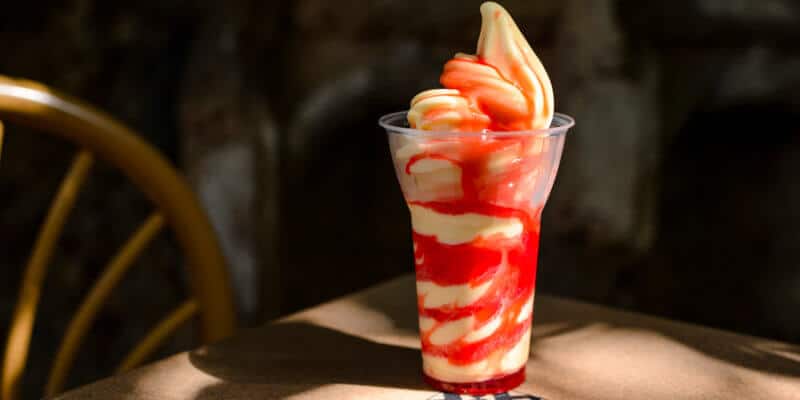 As we always say, no trip to the Disney Parks is complete without the frozen, sweet, and world-famous Dole Whip! It seems Disney has just premiered a brand new rendition of the classic treat with a strawberry and rum infused twist!

Disney’s Animal Kingdom is celebrating “The Lion King” with a whole pride of new limited-edition eats and treats! From the list, this celebration includes latte art, ice cream sandwiches, special cones and more. However, we’re just excited for the Dole Whip!

King’s Cooler Dole Whip is now available at the park’s Tamu Tamu refreshments and dessert stand and is made with the infusion of pineapple Dole Whip with rum topped with a red syrup made up of watermelon and coconut.

If you’re not 21 just yet, don’t fret! Tamu Tamu also offers the same beverage without the rum. The item can be found on the menu as Simba’s Sunset Dole Whip and features pineapple Dole Whip topped with a red syrup made up of watermelon and coconut (pictured above).

This isn’t the only recent addition we’ve seen to the delectable line-up of Disney’s Dole Whips. Only last month did we see the premiere of the Dole Whip Lime Margarita, found at Disney’s Polynesian Village Resort.

Perfect for cooling off in the summer sun, the drink is can be found at the resort’s Barefoot Pool Bar and the Oasis Bar & Grill. For $12.50, you get Corazon Blanco Tequila blended with Dole Whip Lime and garnished with a lime wedge. You can add either salt or a Tajín (spicy chili-lime salt) rim.

For those who can’t get enough of everything Dole Whip, be sure to check out another boozy version of the drink, which can be made at home in just a few easy steps!

Are you going to head over to Disney’s Animal Kingdom to sample this new delicious Dole Whip before it disappears at the end of the summer? Let us know in the comments below!