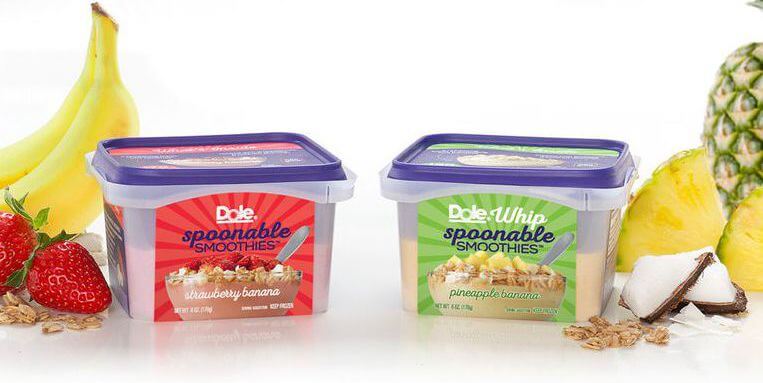 One of the sweetest and coolest treats to be enjoyed at the Disney Parks can now be easily made at home thanks to a new line of “spoonable smoothies” created to taste just like Dole Whips!

Dole Whip fans rejoice! These new at-home packs are coming soon to a freezer aisle near you at your local supermarket and will be made available in strawberry banana and pineapple banana flavors. According to Dole, the Strawberry banana option will be “topped with perfectly ripened strawberries and toasted granola.”

Looking at this up-close image from the new smoothie above, this sweet treat looks scrumptious!

Each offering is on the lighter side as the highest calorie offering of the two, the pineapple banana flavor, only sits at 180 calories per serving size of one whole bowl! Additionally, this flavor is “topped with naturally sweet pineapple and crunchy granola” as well as toasted coconut and blended down pineapple, according to the company’s website.

These delectable Dole Whips are designed to be kept frozen until ready to eat. However, the company does recommend letting them thaw on the counter for about a half hour before consumption.

According to Delish, it’s been reported that when these new smoothies arrive in supermarkets, they will be available for about $4. To compare that to park pricing, it’s a little less than what you’d pay in Magic Kingdom.

Of course, there is no better place to eat a Dole Whip than in the Disney Parks. However, this new offering will allow us to get our fix even if we’re thousands of miles away from all the magic.

Speaking of Dole Whip, have you seen the new Dole Whip Lime Margarita at Walt Disney World? Check it out here.

Are you going to grab these new smoothies off the shelves of your local supermarket when they hit stores? Let us know in the comments below!