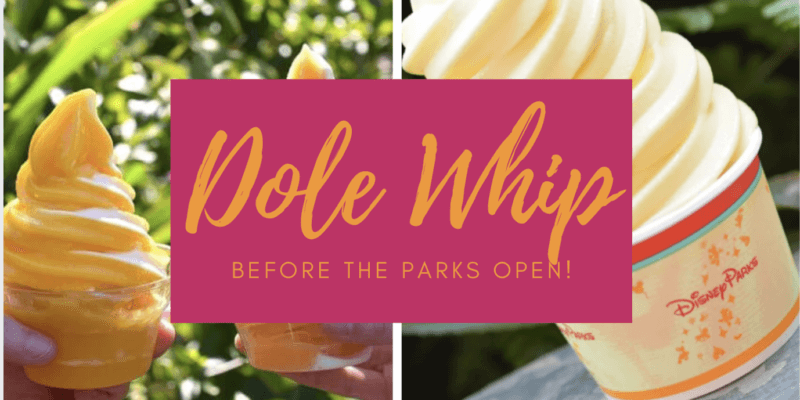 Summer is in full swing in Florida and if you’re anything like us, you’re craving a Dole Whip! Fortunately, even with Disney World’s four theme parks still closed, there are several WDW complex restaurants that are serving Dole Whips this month, before you can visit Adventureland in the Magic Kingdom.

We’ve rounded them up here so you can get your Dole Whip fix whenever you need it!

Disney Springs began its phased reopening on May 20, with an ever-increasing number of shopping and dining establishments once again serving Disney World Resort Guests.

BoardWalk Joe’s has not yet announced a reopening date, but other dining establishments on Disney’s BoardWalk, including the BoardWalk Bakery and Beaches and Cream Soda Shop (which serves pineapple ice cream!) are reopening before Disney World theme parks.

If you can’t make it to Walt Disney World Resort right now, don’t fret! You can easily make your own Dole Whip at home. From traditional Dole Whip soft serve to Dole Whip floats, it’s easy to enjoy this Disney Parks snack without leaving your kitchen.

Are you going to try to get a Disney World Dole Whip before the parks reopen? Tell us which onsite Dole Whip restaurant outside of the parks you’re planning to visit!

Even though Walt Disney World dining plans have currently been suspended, the experts at Academy Travel can still help you plan the perfect Disney Resort vacation! They’ll work with you to prepare for new rules and regulations, including Disney dining changes to make sure your family has an amazing trip, no matter which Disney park you visit.

Comments Off on Disney Parks Closed? Where to Get Dole Whip Now!