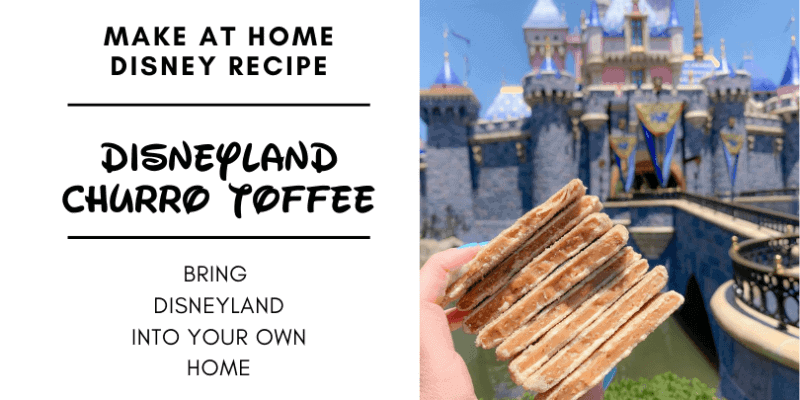 Churros are Disney Parks staple, but there’s another churro-flavored sweet treat that has become increasingly popular at Disneyland.  Churro Toffee is all the rage these days.  With Disney recently sharing an official Churro recipe and after we found out you could get them at the grocery store too, we’re loving on all things Churros right now.

It takes your classic English Buttery Toffee and mixes it with the iconic flavors of a Cinnamon Sugar Mixture in Churros.  But if I can’t get over to Disneyland’s Candy Palace, how can I get my hands on some Churro Toffee?  So here’s the next best thing — a copycat recipe by a fellow Disney fan, Disney Hungry!

This Disneyland copycat recipe has everything we need to make those creamy white chocolate toffee squares.  They’re perfect for dessert or a midday snack if you’re craving Disney treats.

Well, if you’re heading over to Disney California Adventure, you can also pick up Churro Toffee at Trolley Treats.  A seasonal favorite at Schmoozie’s, is the Churro Toffee Milkshake.  During the Festival of Holidays, they also had a Churro Toffee Cold Brew that was absolutely delicious especially if you’re a Joffrey’s coffee lover.  Personally, I love my Churro Toffee with a side of vanilla ice cream.

Comments Off on Make This Disneyland-Inspired Churro Toffee Recipe!