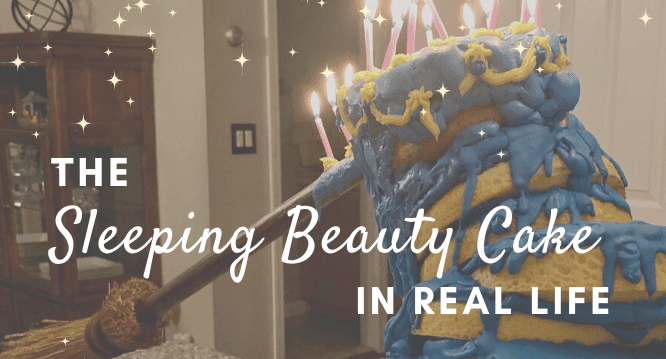 We’ve always wanted to bake a cake, and this might be our last chance! Perhaps it wasn’t a true woodland “Aurora’s 16th birthday,” but Twitter user @BrittanySofty had an April celebration coming up and her creative brother stirred up some serious magic. He had quite a surprise for his sister’s birthday! Straight from the silver screen, this fun Sleeping Beauty cake sprung to life, complete with dripping blue vanilla buttercream frosting, a real handcrafted broom, and plenty of real pink candles.

Someone Baked Up a Sleeping Beauty Cake

Over on Reddit , the conversation continued with congratulations and comments that this Princess Aurora Sleeping Beauty birthday cake was a perfect feat of cake layer engineering and tasty baking all in one. Plenty of Disney Princess fans were impressed! The beautiful cake looks EXACTLY like you’d think it would in real life, doesn’t it?

My brother made me the birthday cake from Sleeping Beauty ??? pic.twitter.com/ar2W9MICyG

We can just imagine a “tisp” or two of sugar having been stirred into the vanilla cake batter! Two eggs, folded gently and 3 cups of flour (the size doesn’t matter, does it?) and well, it will be “much stiffer after it’s baked! We’re glad that Brandon remembered to cook the dessert before decorating it! He certainly had more luck than Fairy Fauna at baking.

What’s really interesting is that Brittany says there is no fondant in this cake whatsoever! And the broom is real – it was a prop that her brother made and incorporated to this birthday cake, but wasn’t edible. Neither is the cake board The Sleeping Beauty birthday cake sits on. The secret recipe to divulge how the layers stood up hasn’t been divulged, but we’re pretty sure fairies never reveal their magic.

The birthday cake fairy is none other than the birthday kiddo’s brother, Brandon Hardy. Brandon makes a living designing sets and props for Broadway in New York City, which explains his high level of creativity in the kitchen. His sister requests that you follow him on Instagram at @brandon.hardy.art for more inspiration. His feed is full of creative musings and projects as well as fun photo opportunities with creatures that Park fans know well! Follow along to see what birthday cake Brandon will cook up next with his magic piping bag!

To all the people over the years who said I deserved to be shot, the deed is done thanks to the amazing @rachaelshanephotography — Thanks for such a great session the other day!!#Photography #ShootMe #RachaelShane

The new Disney Eats YouTube Channel (which recently posted the Disney latte art), revealed how they made a Sleeping Beauty Cake with professional details (edible broom) which may have been the idea or inspiration behind this 2020 April Birthday creation. Check out this tutorial on how Disney’s baker made the different layers and chose to make a fondant-based candle.

Would you attempt making a Sleeping Beauty Cake in real life? We think it would be fun AND delicious. Leave us a comment below!

Comments Off on Someone Baked Up Fauna’s Sleeping Beauty Cake in Real Life!!