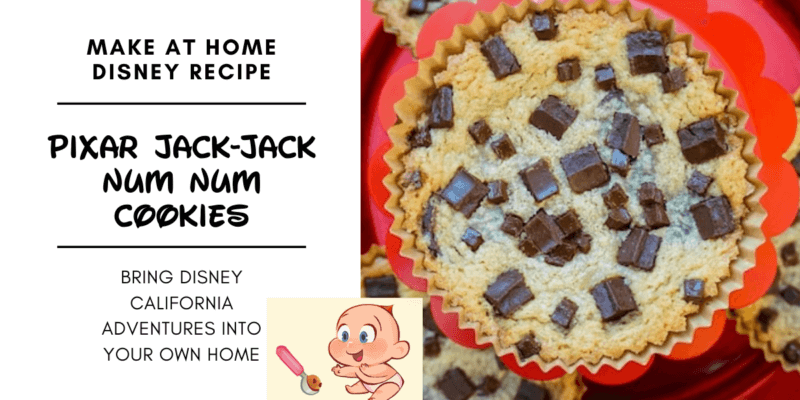 Alright, it’s time for another Disney Park sweet treat recipe!   One of my go-to Disney California Adventure treats can be found at Pixar Pier.  Now it can be easily recreated from your home and mine!  Pixar shared the recipe for Jack-Jack Num Num Chocolate Chip Cookies a few weeks ago, and I’m really craving them today so let’s make them together!

The reason I like this cookie so much better is well, first of call it’s called a num num cookie.  It’s a deep dish cookie that is just perfectly soft and ooey-gooey on the inside.  Personally I like that better than a texture of a shortbread cookie, for example.  And the best way to eat a warm chocolate chip cookie is to pair it with a cold glass of vanilla almond milk, or whatever kind of milk you prefer.

Disney has released a few of their more popular snacks and treats for us to make at home like Dole Whip and Churros.  The Grand Floridian Hotel and Spa over at Walt Disney World even shared their famous chocolate chip cookie recipe.  We’ve also been able to come up with a Disneyland copycat recipe for Tigger Tails and Walt Disney World copycat recipes for Grey Stuff and LeFou’s Brew.  One of the most classic are the Mickey Shaped Beignets.

Enjoy the Jack-Jack num num cookie recipe and all the other fun Disney park ones.  You’ll be able to have a whole entire Disney Parks dessert bar with these.  Num num!