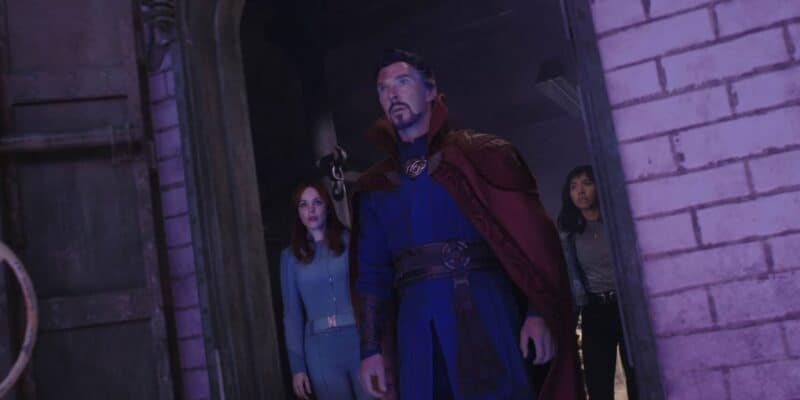 Doctor Strange in the Multiverse of Madness (2022) may end up being the most ambitious MCU movie as it might be bigger than Avengers: Infinity War (2018), Avengers: Endgame (2019), and Spider-Man: No Way Home (2021) combined.

Doctor Strange 2 is definitely the most anticipated Marvel movie for 2022 as fans have been looking forward to seeing what will happen to Doctor Strange as he will face the consequences of helping Tom Holland’s Spider-Man. and the movie will be the first time Marvel fans will get to see the Multiverse, something fans have wanted to see ever since Loki. Now, fans won’t have to wait much longer to see the action-packed movie.

After the ticket pre-sales opened, fans learned that the runtime for the Doctor Strange sequel was cut by 20 minutes, which had some fans worried. Just like No Way Home, fans have heard a lot of rumors surrounding Doctor Strange 2. Most of them are focused on who could appear in the movie as the sequel is reported to have a lot of cameos.

With Kevin Feige confirming that the X-Men and Fantastic Four will be entering the MCU soon, fans wonder if some of the characters from the iconic super hero teams will show up in Doctor Strange 2. With Patrick Stewart reprising his role as Charles Xavier/Professor X, it seems very likely that more Marvel actors will make an appearance.

Movie insider, John Campea shared an update with fans on what to expect for Doctor Strange 2. He revealed that one of his sources claimed that Doctor Strange 2 won’t be shown at CinemaCon this year to avoid any potential spoilers for the movie:

Then Campea noted that the email went on to discuss how this was for security and then found an intriguing line in the latter half of the email stating that Doctor Strange 2 will have bigger moments than any other MCU movie:

“In the email, they went on to say this, they said, ‘There’s more security [for this movie] blah blah blah.’ But the key line was this: ‘There are more big surprises in Doctor Strange 2 than in Infinity War, Endgame, and Spider-Man: No Way Home combined.’”

One thing all of the movies listed have in common is that they all had major plot twists and reveals. Infinity War shocked fans by having half of the universe turned to dust. Endgame had Captain America using Mjolnir, time travel, and Tony Stark’s sacrifice. No Way Home did have some similar ideas with the Multiverse, but the reveal of Tobey Maguire and Andrew Garfield‘s Spider-Man, and other iconic villains were all from previous Spider-Man franchises.

Doctor Strange 2 is reported to include several variants of Strange and Wanda, dinosaurs, Ultron robots, the Illuminati, some of the X-Men cast, Iron Man variant, Captain Marvel variant, Wolverine, and even Deadpool. Those are not all of the reported cameos that could make it into the movie, but Doctor Strange 2 definitely has the potential to surpass Endgame and No Way Home if some of the cameos are true.

It will be interesting seeing what universes Strange travels to and what he will find. It’s a new era of Marvel and fans will have to wait and see how the Doctor Strange sequel changes the Marvel Cinematic Universe.

Do you think Doctor Strange 2 will have more memorable moments than Endgame and No Way Home? Let us know what you think in the comments section below!