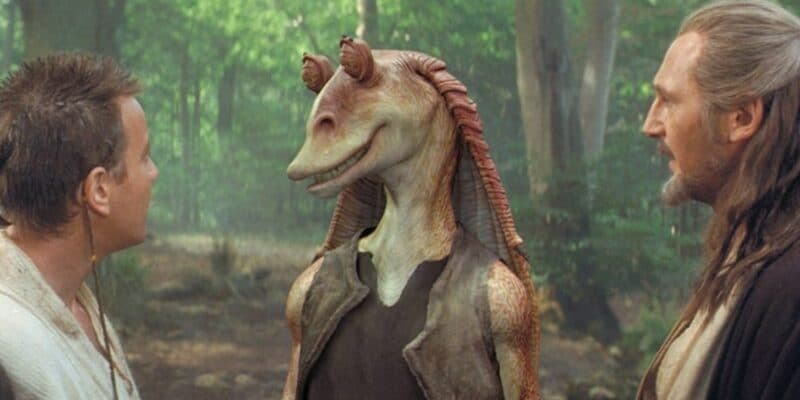 And then there are the animated shows, from Star Wars: Visions (2021) to Star Wars: The Bad Batch (2021). But while many of these shows are great additions to the franchise, is it time Disney and Lucasfilm started thinking outside the box? Perhaps Marvel’s What If…? (2021) has inspired us too much, but what if there was a TV series centered around Jar Jar Binks?!

We understand that Jar Jar Binks is a widely hated character, and we’re not suggesting for one minute that he’s overrated, but before you turn to the dark side in anger, here are a few reasons why “weesa” think such a show would work (sorry).

It’s no mystery that the Star Wars fanbase is considered by many to be the most “toxic”, however, it can also be one of the most fickle. Perhaps the same can be said about most fandoms, but when it comes to Star Wars, fans appear to frequently change their minds about many things.

Take Anakin Skywalker, for example — he was hated when the prequel trilogy movies were in theaters, whether it was Jake Lloyd or Hayden Christensen behind the camera, but when it was announced that Christensen was returning for Obi-Wan Kenobi (2022), fans were excited!

With that said, the prequel trilogy has become more appreciated in recent years, which likely owes thanks to hit animated show Star Wars: The Clone Wars (2008 — 2020). In other words, if Anakin Skywalker won fans over in the end, there could still be hope for Jar Jar Binks yet!

5. It Could Explore the Popular “Sith Theory”

Unless you’ve living somewhere in Wild Space without a decent HoloNet connection, you’ll probably be familiar with the popular fan theory which suggests that Jar Jar Binks is actually a Sith Lord in disguise. It’s even rumored that George Lucas once hinted at such a possibility.

Despite the “Rule of Two”, which in the case of the prequel trilogy would include Sheev Palpatine (Ian McDiarmid) and Anakin Skywalker (Hayden Christensen), it’s entirely possible that Jar Jar Binks was a third Sith Lord in disguise, or perhaps even the second while Anakin was just a boy.

Either way, there’s nothing in the prequel trilogy or even in the animated show The Clone Wars that contradicts the Sith Lord theory, which means that it could be explored in a Jar Jar Binks TV show, which would definitely paint the character in a very different light for all the haters.

4. He’s So Hated That People Would Watch It

What’s Star Wars without a little controversy? It can’t seem to get away from it these days, whether it’s the widely panned sequel trilogy movies, the firing of Gina Carano (Cara Dune) from The Mandalorian (2019), or the underwhelming reception of The Book of Boba Fett (2021).

Perhaps this is something Disney and Lucasfilm could exploit with a Jar Jar Binks series. Announcing such a thing would likely split the fanbase right down the middle like a hot lightsaber through butter. But as the old saying goes, there is no such thing as bad publicity.

It goes without saying that Star Wars is a franchise that has almost always played it safe. With the exception of animated shows The Clone Wars (in which Jar Jar Binks is a recurring character) and Star Wars: Rebels (2014 — 2018), both of which push the faraway galaxy into exciting new territories, Star Wars rarely takes risks.

Even The Mandalorian operates within a framework which Disney and Lucasfilm know will work, while the sequel trilogy, for the most part, is essentially a carbon copy of the original trilogy. In fact, it seems that the prequel trilogy is really the only time Star Wars has taken huge risks.

So, while we’re not suggesting that Disney and Lucasfilm takes any Star Wars character and gives them their own TV show, we do think that a Jar Jar Binks show would be a great opportunity for some much needed comedy in the Star Wars universe, not unlike the latest Thor sequels. Jar Jar Binks would actually have to be funny this time around, though.

2. Characters Don’t Have to Stay the Same

Jar Jar Binks will probably remain one of the most hated Star Wars characters forever (at least until someone even more annoying comes along), but he doesn’t have to be. As we mentioned earlier, even Anakin Skywalker was once hated, but now, he’s a fan-favorite.

Sometimes, it takes the passage of time for fans to appreciate something that was there all along. In the case of Anakin Skywalker, it’s possible that The Clone Wars‘ version of the character (Matt Lanter) did favors for the live-action version by enriching him somewhat.

Speaking of The Clone Wars, there was a time when even Ahsoka Tano (Ashley Eckstein) was hated by fans, but following a bit of an overhaul, she’s now one of the best Star Wars characters ever. So it’s not impossible for Jar Jar Binks to undergo a few necessary tweaks here and there.

Do you remember when Boba Fett (Jeremy Bulloch) from the original trilogy was revered as an almost god-like Star Wars character, despite only having a few scenes in those films, as well as a pretty embarrassing death? Well, of course you do, because it wasn’t that long ago!

The idea of a Boba Fett TV series had been around for a very long time, and during The Mandalorian Season 2 finale, the prayers of countless fans had finally been answered. Last December, The Book of Boba Fett (2021) premiered on Disney+ to much anticipation.

Unfortunately, many fans felt that Boba Fett (Temuera Morrison) had become a friendly neighborhood bounty hunter, as opposed to the morally vague character from the original films. But if Boba Fett can go from hero to zero, maybe Jar Jar Binks can do the opposite!

Would you like to see a Jar Jar Binks Star Wars TV show? Are you one of the very few Star Wars fans who happens to love him?! Let us know in the comments below!