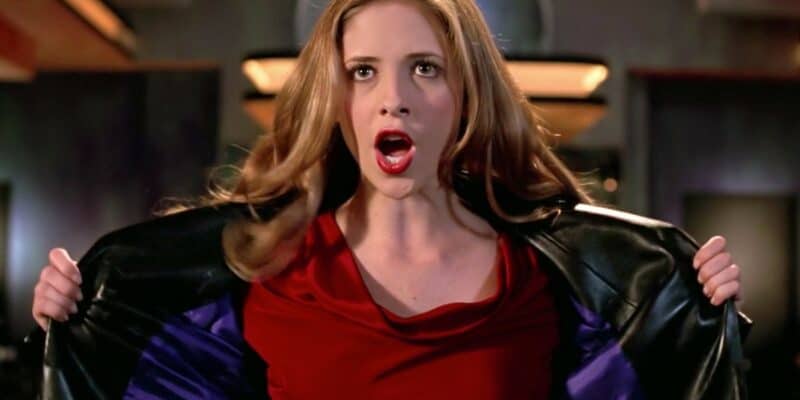 “Once More, With Feeling” is the most memorable Buffy the Vampire Slayer episode. And there were many great ones, from the Tim Burton-esque “Hush” to major tear-jerkers like “The Body.” If you’re a fan of the show, you’ll know that creator Joss Whedon definitely liked to experiment, whether it was silent episodes, or in this case, musicals!

The episode in question was nominated for a number of awards and is generally considered one of the best episodes in a television series of all time. But besides its brilliantly-written songs, the most impressive thing about this ground-breaking musical is the fact that Buffy the Vampire Slayer is a teen-horror series!

To no surprise, a number of other shows followed suit in the years thereafter, each having their own musical episode, but none of them were quite as well put together as genius “Once More, With Feeling.” But that doesn’t mean that other properties shouldn’t brave the waters of a musical, which leads us nicely onto the subject of Star Wars!

Could Star Wars work as a musical? Well, there are a few questions worth asking first. For starters, where would the faraway galaxy be best suited to stage its very own musical? Which Star Wars characters would be the best people for the task? And more importantly, how would the music be justified within the narrative?

Call us crazy, but here’s how a Buffy the Vampire Slayer-inspired Star Wars musical could absolutely rock!

It Should Be Part of an Animated TV Series

The best platform to stage a Star Wars musical shouldn’t be picked at random, but like “Once More, With Feeling”, a TV show would be the best choice. That’s not to suggest that the likes of The Mandalorian or Ashoka are ideal candidates, though, even if Ashoka is set to break the mold, with rumors of game-changing plot devices such as time travel.

It’s not that we don’t want to see Din Djarin (Pedro Pascal) belting out an ’80s-style rock ballad, but we think a Star Wars musical would be best told in animation. It would need to be earned, though, as “Once More, With Feeling” didn’t arrive until the sixth season of Buffy the Vampire Slayer, by which point the show had already enjoyed a number of ‘experimental’ episodes.

Either way, an animated musical would go down smoother with fans, as it would be pretty jarring to see live-action Star Wars characters suddenly singing and dancing! While we believe that a Star Wars musical could work, it’s fair to say that Buffy the Vampire Slayer got a head start as it operates within the realm of the supernatural. But does the faraway galaxy have any advantages?

The Force is a Plot Device to Many Abilities

“The dark side of the Force is a pathway to many abilities some consider to be unnatural.” Sounds great! How about Star Wars characters suddenly being possessed by something from deep within the Force that gives them the desire to spontaneously perform flawless, unrehearsed musical numbers, with supporting dancers, backing vocals, and special effects?

In Buffy the Vampire Slayer, the characters – and the entire town of Sunnydale for that matter – are possessed by a demon who has the power to make his victims burst into song and dance at any given moment. This genius plot device means that the episode doesn’t seem one bit ridiculous or out of left field, as the show deals with all sorts of demons – so why not a musical one?

But there’s also a strong plot device in Star Wars that could make this happen – the Force, which is something we’re always learning new things about. This would be much better than having an episode that’s simply a musical with no explanation. While that could still work, we love the idea of the singing being plot-driven, and the Force would no doubt be the best way to achieve this!

Iconic and Well-known Characters Are a Must

Wherever and however Star Wars finds its groove, another equally important ingredient would be the choice of characters. The trouble is that Buffy the Vampire Slayer had only one spin-off in the form of Angel, while the faraway galaxy now boasts a wealth of TV shows and movies, so its many characters are quite literally scattered all over the place!

One of the strengths of “Once More, With Feeling” is that it uses the show’s iconic characters, like Buffy (Sarah Michelle Gellar), Giles (Anthony Stewart Head), and Spike (James Marsters). So we see no reason why a Star Wars musical couldn’t use the likes of Luke, Leia, and Han, and other iconic or well-known characters (although we’re not sure about Chewie’s singing abilities).

With that said, the actors who played the original gang are now a lot older, while Carrie Fisher has sadly passed away. This is another reason why an animated musical would be a better choice, as it could bring in iconic characters from the original Star Wars trilogy, just like in Star Wars: Rebels, where the likes of Princess Leia and Lando Calrissian make an appearance.

A Powerful Story and Theme Would Be Key

It isn’t enough to just have a bunch of Star Wars characters burst into song and dance with no meaning behind it all. After all, Star Wars isn’t musical material by design, but then the same can be said about Buffy the Vampire Slayer. Movies like The Greatest Showman (2017) and West Side Story (2021), or most Disney movies, were intended to be musicals – Star Wars wasn’t.

As such, any sort of Star Wars musical would need to follow at least one theme, which is something “Once More, With Feeling” does incredibly well. In that episode, most of the songs are centered around the fact that Buffy has been resurrected – or plucked from a blissful rest – by her selfish friends and family, with resentment being a recurring theme throughout.

However a Star Wars musical would transpire, it would need the foundation of a solid storyline. This is part of the reason why all the tracks from “Once More, With Feeling” are still so popular and beloved by fans, as they carry that extra bit of weight. And there are many moments with gravitas throughout Star Wars canon, from the tragedy of Order 66 to the fall of the Empire.

With all that said, Star Wars is no stranger to the power of song. Whether it’s Jabba’s Palace or the Mos Eisley Cantina, you’ll always find a live singer or a band in some shape or form. Take the widely-panned trailer for Star Wars: Galactic Starcruiser at Disney World, for example – it features a singing Twi’lek called Gaya – and let’s face it, she’s probably the best part of the trailer!

We’re firm believers that the faraway galaxy needs to experiment with different genres, so why not a musical? Or even something that’s a love letter to the power of music, not unlike Guardians of the Galaxy. Either way, it’s high time Disney and Lucasfilm did something completely bold. And what’s the worst that could happen – after all, Star Wars is no stranger to controversy, either!

Do you think a Star Wars musical could work?