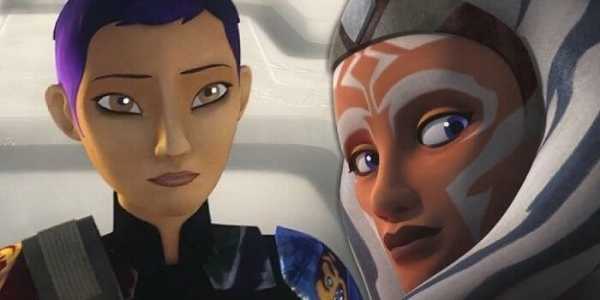 The Ahsoka series has finally cast Sabine Wren, who will be making her first live-action appearance in the Star Wars franchise. 27-year-old actress Natasha Liu Bordizzo will be playing the character, and as Ahsoka is rumored to also feature Jedi Ezra Bridger and villain Grand Admiral Thrawn, it sounds like it could be a sequel to Star Wars: Rebels.

But not everyone is familiar with the hit animated show, and you might even be wondering who Sabine Wren is. Well, luckily, you don’t need to hop back and forth through all the Star Wars movies and TV shows, because so far she has only ever appeared in Star Wars: Rebels (although she can also be found in micro-series Star Wars: Forces of Destiny).

While you probably already know enough about her, there are still plenty of fans who had no idea who Bo-Katan (Katee Sackhoff) or Ahsoka (Rosario Dawson) were when they made their live-action debuts in The Mandalorian Season 2! So here’s everything you need to know about Sabine Wren before you watch Ahsoka.

Skilled Mandalorian warrior and talented graffiti artist, 16-year-old Sabine Wren is a member of the Ghost Crew, which includes Jedi Knight Kanan Jarrus, young Jedi Ezra Bridger (the star of the show), Lasat fighter Zeb, Twi’lek pilot Hera Syndulla and astromech droid Chopper. Together, they attempt – usually with much success – to thwart the efforts of the evil Galactic Empire.

Sabine appears in the first episode of Star Wars: Rebels and remains one of the main characters throughout all four seasons. But while she’s one of the good guys, you might be surprised to learn that, like many other Star Wars characters, she has a pretty dark past, and her excellent knowledge of weapons and explosives can be traced back to her days with the Empire…

When the Ghost Crew first meets Ezra in the show’s pilot episode, like all the others, Sabine is an established member of the team. However, before her years as a rebel fighter, Sabine was a cadet at the Imperial Academy of Mandalore, where she built powerful weapons designed to penetrate beskar armor. So, not so long before becoming a rebel, Sabine was loyal to the Empire.

But not wanting to be responsible for creating something that could destroy her own people, Sabine fled the Empire and spent some time working as a bounty hunter (like another Mandalorian we all know!). Eventually, she wound up getting recruited by Hera Syndulla and Kanan Jarrus to become part of the early rebel alliance, the Ghost Crew.

In the show, Sabine uses her incredible graffiti art as a symbol of defiance against the Empire and hope for the growing rebellion. Between this and her formidable Mandalorian fighting abilities, Sabine is a valuable member of the Ghost Crew, and the relationship between these skills is best represented by her colorful, spray-painted Mandalorian armor.

But it’s Sabine’s artistic talents – which she inherits from her father Alrich Wren – that have made her one of the more underrated Star Wars characters. After all, this makes her the most creative, and while she mostly uses her graffiti skills to represent the rebellion movement, she is also known for mixing them in during combat, often using spray paint to temporarily blind the enemy!

In having fled the Imperial Academy on Mandalore, which rendered her a traitor and fugitive of the Empire, Sabine was also disowned by her own mother Ursa Wren, the leader of Clan Wren. As such, Sabine’s relationship with her mother is deeply troubled. Sabine also has a brother named Tristan, who works for Clan Saxon, a group of Mandalorians who work with the Empire.

But Sabine’s Mandalorian heritage remains a part of her blood and beliefs. During the show, she never renounces her Mandalorian ways, which is also evident by the fact she continues to wear her armor proudly. However, because of the Empire’s influence over her home planet, her ties with both her family and her people are fractured – at least until Season 4.

If you’ve seen The Mandalorian, then you’ll already be familiar with the Darksaber. In the live-action show, the blade is under the ownership of Din Djarin (Pedro Pascal), from whom Bo-Katan Kryze will have to win through combat. However, it also appears in Star Wars: Rebels, which takes place 14 years before The Mandalorian.

In the show, Sabine discovers the Darksaber on Darth Maul’s home planet Dathomir. Though reluctant at first, Sabine is trained by Kanan Jarrus and Ezra Bridger in lightsaber combat, and ultimately decides to use the weapon to join the Mandalorian Civil War so that she can unite her people against the real enemy, the Galactic Empire.

There’s probably no surprise that Sabine Wren has had dealings with fellow Mandalorian Bo-Katan Kryze, who also appears in Star Wars: The Clone Wars and The Mandalorian Season 2. The former Death Watch leader appears in the Season 4 premiere of Star Wars: Rebels to help Sabine lead an assault on an Imperial prison, where Alrich Wren is incarcerated.

However, Bo-Katan is furious when she learns that Sabine created a beskar-targeting weapon. To atone for her mistakes, Sabine destroys the machine with the Darksaber, but when she tries to kill Gar Saxon – a corrupt Mandalorian who works with the Empire – Bo-Katan stops her. Sabine then hands the Darksaber to Bo-Katan, swearing allegiance to the new ruler of Mandalore.

In the Star Wars: Rebels epilogue, which is set sometime after Return of the Jedi, Sabine is approached by elusive Jedi Ahsoka Tano, whom she hadn’t seen for some 10 years. The two decide to join forces to search for their friend Ezra Bridger, whose whereabouts remain unknown after he disappeared into hyperspace with Grand Admiral Thrawn in the show’s epic finale.

It is rumored that the upcoming Ahsoka series will focus on this search, and if this is the case, then it would appear that Sabine and Ahsoka may have already been looking for the Jedi for 14 years, as Star Wars: Rebels takes place five years before A New Hope, and Ahsoka takes place five years after Return of the Jedi (with the original trilogy spanning around four years).

It’s possible then, that Sabine Wren might appear in the upcoming live-action series from the offset unless she and Ahsoka have parted ways since the Star Wars: Rebels epilogue and must reunite. Either way, it’s more than likely that the two will be working together to continue their search for Ezra Bridger.

And now that Sabine Wren has finally been cast, it begs to question which other characters from Star Wars: Rebels might show up in Ahsoka. With Ezra Bridger allegedly the focus of the plot, and as we know that Ahsoka will be looking for Grand Admiral Thrawn, should we also expect to see the likes of Hera Syndulla, Zeb and Chopper show up? Let’s hope so!

Do you think Sabine Wren will be a main character in Ahsoka?