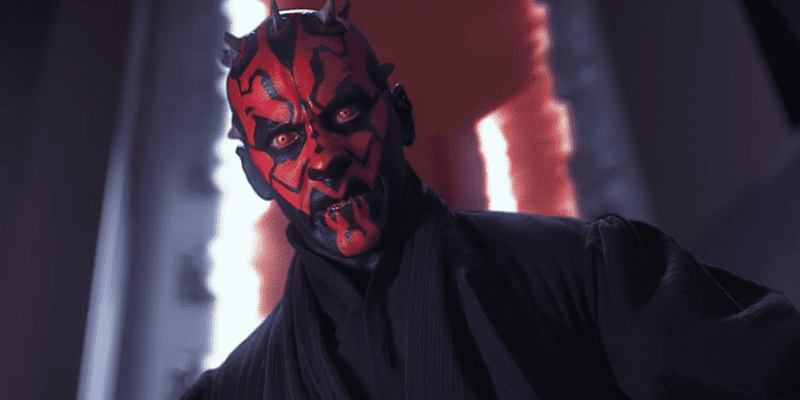 Star Wars fans were treated to a first look at the highly anticipated Mandalorian spinoff — The Book of Boba Fett — with this week’s release of the stunning new trailer. Also making waves in the Star Wars galaxy is a rumor indicating that a Darth Maul solo series is already in the works at Lucasfilm. Per reports, the animated series would focus on Darth Maul’s ascendancy as leader of the criminal syndicate known as the Crimson Dawn prior to the events of Solo: A Star Wars Story (2018).

The rumor of the Darth Maul series is unconfirmed as of this writing, but that hasn’t stopped the enthusiasm of fans of the former Darth Sidious apprentice on social media.

Related: Hayden Christensen Is Returning For ANOTHER ‘Star Wars’ Project!

Rumors of a Darth Maul animated series first started making their way across the internet as Cinelinx reported an unnamed Star Wars project had begun voice recording. The report’s sources indicated that actor Sam Witwer — the voice of Darth Maul in projects like The Clone Wars series and a cameo in Solo — was recording with actors from The Clone Wars and The Bad Batch, including Captain Rex voice Dee Bradley Baker and Anakin Skywalker voice Matt Lanter.

Additional sources later reported that recording was part of the production of a new animated series that took place before the events of Solo: A Star Wars Story and focused on Darth Maul’s time as the head of Crimson Dawn. The rumor says that with recording in progress, fans may get an official announcement relatively soon.

Paul Bettany — well known by Marvel Cinematic Universe fans for his portrayal of Vision in the Avengers franchise and Disney+ series WandaVision — is also rumored to join the series to voice his Solo character, Dryden Vos.

As the rumor spread, fans lit up Twitter with their takes on the possibility of a Darth Maul series. Twitter user Venom Inc. commented on how good it is to be a Star Wars fan nowadays, saying:

“The more Boba Fett & Darth Maul content [we] get, the better my life will be.”

The more content Boba Fett & Darth Maul get, the better my life will be 😌 pic.twitter.com/0NVUIm0d3g

Twitter user James Marsh is even more excited at the Darth Maul rumor than he is at the actual, in-the-can, IRL series The Book of Boba Fett. Marsh proclaimed his loyalty to the Dathomirian, stating:

“Move over Book of Boba Fett, here comes The Shenanigans of Darth Maul!”

While the response to the prospect of a Darth Maul-centric Crimson Dawn series was overwhelmingly positive, some felt that another Solo: A Star Wars Story character was overlooked by Lucasfilm. Emile Clark’s Qi’ra was a fan-favorite that some feel deserves the spotlight. Twitter user Kala Elizabeth made the case, saying:

“Star Wars: Solo set up an amazing morally complex and strong independent female character with so much potential, yet she’s barely been explored. Emilie Clarke herself has expressed her enthusiasm about playing Qi’ra again. Where the h*** is her show?”

“THIS. Darth Maul has been mauled to death. Give me a Qi’ra show for the love of god.”

THIS. Darth Maul has been mauled to death. Give me a Qi’ra show for the love of god😤😤😤 https://t.co/NrXgMTnbUc

Another common quip from the Twitter-verse was the idea that Guardians of the Galaxy actor Chris Pratt — in the headlines for recently being announced as the voice of both Mario and Garfield in upcoming projects — would likely be voicing Darth Maul in the animated series. Markenstein’s Monster cracked the joke breaking news-style, saying:

“BREAKING NEWS! Darth Maul series confirmed by Disney / Lucasfilm! Chris Pratt will be taking over as the voice of Maul.”

Darth Maul series confirmed by Disney/Lucasfilm! Chris Pratt will be taking over as the voice of Maul. pic.twitter.com/y3uWIjCmaR

Darth Maul (Ray Park) first debuted on-screen in the prequel trilogy as the Sith Apprentice of Darth Sidious (Ian McDiarmid). In a duel with Qui-Gon Jinn (Liam Neeson) and Obi-Wan Kenobi (Ewan McGregor), Qui-Gon fell to Maul before the Sith was sliced in half by the lightsaber of Obi-Wan Kenobi.

The fan-favorite character survived his grave injury, emerging with cybernetic legs in future projects like Dave Filoni’s The Clone Wars and Star Wars: Rebels. Maul became something of an anti-hero as fans identified with his hatred of former Sith Master, Darth Sidious. His obsession with Obi-Wan was also coupled with grudging respect that added a captivating layer to the master of the double-bladed lightsaber.

The Book of Boba Fett premieres on December 29. Series Andor and Obi-Wan Kenobi are due out sometime in 2022 with Ahsoka, and The Mandalorian Season 3 likely hitting Disney+ in 2023.

Do you buy the rumors of a Darth Maul and Crimson Dawn animated series? Let us know in the comments!