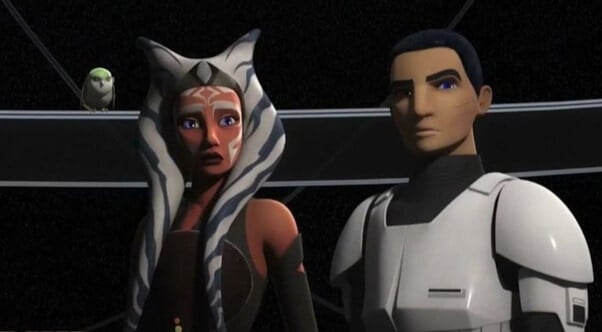 It wouldn’t be Star Wars if there wasn’t some attempt to connect its ever-growing world. When Luke Skywalker showed up at the end of The Mandalorian season 2 in that shocking finale, it anchored Jon Favreau’s show firmly in the post-Empire galaxy.

While these additions help enhance the Star Wars expanded universe, it does pose a risk to its already cemented history. Star Wars creators have to navigate a very thin line between embellishing their pre-established narratives and overlapping with existing parts of the galaxy far, far away.

The Star Wars blockbusters came to a rocky end when Episode IX – The Rise of Skywalker debuted in 2019. Coming off the back of Rian Johnson’s hugely divisive Episode VIII – The Last Jedi (2017), JJ Abrams’ return to the Skywalker Saga came with high expectations and ultimately made a muddled landing. Lucasfilm is seemingly aiming to add clarity to the Star Wars conclusion through its other media, namely via its Disney+ television shows and Marvel Comics storylines.

We’ve seen recently how Marvel Comics Darth Vader series is adding context to Palpatine’s Sith Eternal and the planet of Exegol in which they inhabit.

Dave Filoni’s new show, The Bad Batch, is also hinting at Force-sensitive clones in the form of Michelle Ang’s, Omega — another genetically enhanced Jango Fett clone that becomes the ward of Clone Force 99.

This suggestion that Omega might be a Force-wielder despite being cloned could be a way for Star Wars to retcon Supreme Leader Snoke’s creation. The character appeared to be, what seemed like at the time, the big bad of the sequel trilogy — he made his debut in Abrams’ Star Wars: Episode VII – The Force Awakens (2015). The Last Jedi proved that Snoke wasn’t a lasting villain, and well, The Rise of Skywalker showed it was Palpatine all along.

The Bad Batch is so far doing a good job at showing fans what happened immediately following Chancellor Palpatine’s execution of the horrendous Order 66. The Clone Force 99 members — Hunter, Tech, Crosshair, Wrecker, and Echo (Dee Bradley Baker) — are shown to be taking on a series of mercenary missions in the new Galactic Empire after leaving their clone trooper past — and Admiral Tarkin’s orders — behind.

Spoilers ahead for The Bad Batch episode 6

In “Decommissioned”, the sixth Bad Batch episode, Star Wars fans saw their first major cliffhanger. After meeting returning characters Trace and Rafa Martez on Corellia, the episode ends with the two sisters talking to an unknown hologram about their encounter with the defective clones.

We don’t know as of yet who Trace and Rafa were speaking to but if the small glimpse of a certain cloak is anything to go by, it could mean Dave Filoni might retcon a fan-favorite Jedi’s Star Wars history.

Theories are rife over who the mysterious contact is, and the reason behind them wanting the very same tactical droid as the Bad Batch squad. One prominent theory is that it could be Jedi Knight, Ahsoka Tano. However, the sisters clearly said “him” when patching the communication through. That being said, it could still be someone connected to Ahsoka.

While it would be exciting to see Ahsoka return to the animated Star Wars universe, it would run the risk of removing E.K. Johnston’s Ahsoka novel from the Star Wars canon. The Star Wars book follows Ahsoka’s journey as she learns to live without the Jedi Order, aiming to renounce the Force and eventually becoming an operative of the burgeoning Rebel Alliance.

Let’s take a step back — if the person of the hologram is a “him”, how can we know that Ahsoka is even involved. Well, at the end of Star Wars: The Clone Wars, Ahsoka ends up meeting the Martez sisters after leaving the Jedi behind — the arc received a certain amount of backlash from fans, so their appearance in The Bad Batch is surely going to raise some eyebrows at their importance to the story.

Another “him” who is directly related to Ahsoka post-Order 66 is the clone army deserter, the former Captain Rex. Ahsoka and Rex parted ways in The Clone Wars Season 7 when Disney+ released the Star Wars series last year. We know that the fan-favorite character is likely to appear in The Bad Batch after that reference in Episode 2, “Cut and Run”. But, if Rex does appear it could mean that Ahsoka Tano isn’t far behind — she was the one who removed his inhibitor chip, after all.

And then there’s Senator Bail Organa who would likely want to know if there were rogue clone troopers running riot in the galaxy. In Johnston’s Ahsoka novel, Bail’s need for the Jedi in the growing Rebellion was highlighted, with her being an asset to his efforts in combatting Palpatine’s Empire.

Yes, not everything leads back to Ahsoka, but as her Rebel operative name suggests, she is the fulcrum on which a lot of events in the Star Wars universe have happened. If her arrival in Filoni’s The Bad Batch is imminent — even if indirectly through people like Bail or Rex — it could threaten the soul-searching and learning moments she had in Johnston’s novel.

There is also that R7 droid reference too, which as we know was Ahsoka’s droid once upon a time…

These, in turn, paved the way for her role later on in the Star Wars canon as one of the galaxy’s most powerful Jedi and highlighted in Star Wars Rebels and The Mandalorian Season 2. The latter signaled Ahsoka’s determination to track down Grand Admiral Thrawn. The Ahsoka novel explored the former Jedi Knight’s problem with being part of a larger whole so her possible connection this early on with the Bad Batch could threaten that key journey for Ahsoka.

If Filoni does bring her into The Bad Batch this early on post-Order 66 when Ahsoka should be somewhere hiding in the galaxy, it could provide evidence that Lucasfilm isn’t afraid to alter its already established history.

Who do you think the Martez sisters were talking to? Could they still be connected to Ahsoka Tano?