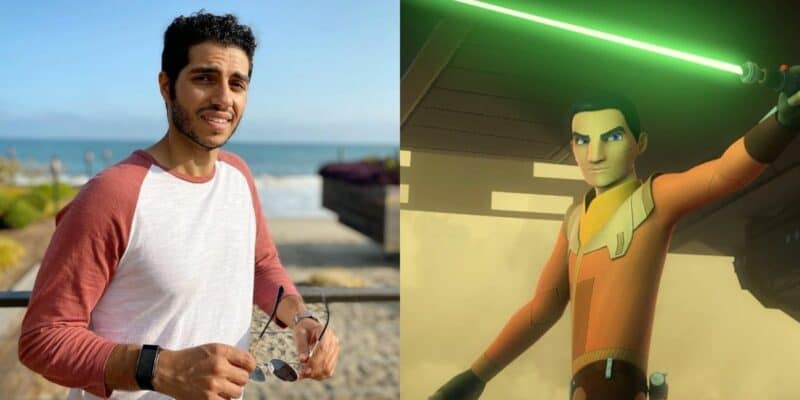 When Rosario Dawson’s Ahsoka Tano uttered the name Grand Admiral Thrawn in The Mandalorian Season 2, it caused a ripple throughout the galaxy.

Not only did it cement the existence of the infamous villain in the live-action Star Wars universe, but potentially (most likely) revealed that Ezra Bridger’s arrival is imminent. One actor linked to the Star Wars Rebels Jedi Padawan is Aladdin star, Mena Massoud.

Massoud brought the Disney “street rat” to life in the live-action retelling, Aladdin (2019). His future may also lay with the House of Mouse if the Ezra Bridger casting rumors are anything to go by. Massoud further ignited the Bridger fan cast after posting a cryptic photo to Instagram earlier this year, but more on that later.

The last time Star Wars fans saw Ezra Bridger (Taylor Gray) he was sacrificing himself to save the galaxy from the Galactic Empire’s evil Grand Admiral Thrawn (Lars Mikkelsen). Since Rebels ended, it had been relatively quiet on the Bridger/Thrawn front, until Ahsoka Tano spoke Thrawn’s name in Dave Filoni’s The Mandalorian episode, “Chapter 13: The Jedi”.

Anakin Skywalker’s former Padawan sought out Corvus Magistrate Morgan Elsbeth (Diana Lee Inosanto) in order to find out where her “master” — Thrawn — was. And if Thrawn is about to enter the mix, we can bet that his nemesis, Rebels hero Ezra Bridger, won’t be far behind.

In March this year, the Aladdin star posted a cryptic photo on his social media along with a rather notable quote from Star Wars history.

Hey, just so you know, when I escape I won’t hurt any of you.

The caption is a direct quote from the Star Wars Rebels episode, “Stealth Strike”. And while the photo, along with the caption, garnered much attention from Star Wars fans angling for Massoud’s casting as Kanan Jarrus’ (Freddie Prinze Jr.) former apprentice, the actor has now shared more on the cryptic social media post. You can see here how he might look as the character of Ezra Bridger.

Speaking to ScreenRant, Massoud shone a light on the Ezra Bridger situation:

“Yeah. Just manifesting, just manifesting, trying different things. Yeah, there’s not much more I can say about that, but, you know, I had heard murmurings that this role was coming up and this is becoming a real thing. So I just kinda wanted to throw my name in the ring and — yeah, just part of manifesting what you want.

Whether things have changed since Massoud posted the photo is still unclear, but we can ascertain from this interview that at the time of posting the photo with that caption, his potential casting for Lucasfilm was not a done deal. And might never be.

The actor goes on to explain his reasoning:

In the interview, Massoud details the experience he gained while working on such a large production as Disney’s Aladdin, and how that will hopefully carry forward throughout his career:

I think it would just be a great opportunity to take everything that I learned on a set like Aladdin and implement it into the Star Wars or DC or Marvel universe. We’re talking about manifesting, so yeah, it would mean a lot, it would mean a lot. I think I would also do a solid job and work really hard. I like what they’re doing with that world and how they’re expanding the universe.”

Star Wars is certainly an ever-growing, expanding universe. Not only is Ahsoka, Obi-Wan Kenobi, Andor, and The Mandalorian Season 3 potentially coming by next year, The Book of Boba Fett will debut in 2021 on December 29.

Speaking of Ahsoka, Dawson also continued the Massoud rumors after sharing a post on Instagram of Massoud’s rumored casting. At this point, with Thrawn and Bridger most likely making an appearance in Ahsoka — as well as Hera Syndulla’s (Vanessa Marshall) arrival in The Bad Batch — Ahsoka could very well be the Rebels sequel. There is also the rumor that fellow Ghost Crew member, Sabine Wren could also appear in the Ahsoka series, further linking together the post-Return of the Jedi Star Wars verse — Wren famously found the Darksaber amongst Darth Maul’s possessions, the saber, of course, now lies with Din Djarin (Pedro Pascal) after his battle with Moff Gideon (Giancarlo Esposito).

As for Thrawn, well, rumors point to the actor — whoever they may be — already having filmed for a Star Wars project…

Would you like to see Mena Massoud as Ezra Bridger? Let us know in the comments!