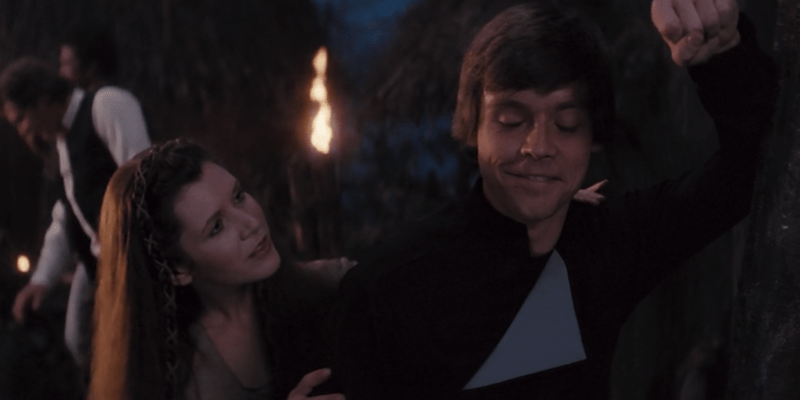 Many Star Wars fans will know that Mara Jade plays a huge part in the non-canon Star Wars Legends media. First appearing in Timothy Zahn’s Heir to the Empire (1991), the character — who was previously an Emperor’s Hand assassin — went on to marry the Jedi hero of the Star Wars franchise, Luke Skywalker.

And the character from the former Star Wars Expanded Universe — now referred to as Star Wars Legends — could have actually appeared in George Lucas’s original trilogy, except, apparently, the director didn’t like her.

Mara Jade came a long way from working for Emperor Palpatine and swearing to kill Luke Skywalker to avenge the former’s death. Eventually, Mara Jade would rebuke Palpatine’s hold on her and reject the Galactic Empire, becoming a Jedi Master and Jedi Council member in her own right, with Skywalker’s help, over the course of Zahn’s novels.

So far, Mara Jade hasn’t made an appearance in the current Star Wars canon, but she could have many, many years ago.

The Thrawn Trilogy not only introduced Mara Jade to the Star Wars mythos but revealed that she was present in Jabba’s Palace, disguised as a dancer, during the events of Return of the Jedi as well.

While Star Wars: Episode VI – Return of the Jedi (1983) came out almost 10 years before the Thrawn Trilogy began, there was a special edition that was released in 1997 ahead of Lucas’s prequel trilogy debut.

1997’s Return of the Jedi special edition featured additional footage in Jabba’s Palace that included new cast members hired as extras. Mara Jade, under the guise of “Arica,” could have easily been included in the new footage, potentially being played by Shannon McRandle, who portrayed Mara in promotional photos.

It is possible, however, that personal feelings about the character prevented her from even cameoing in Return of the Jedi.

Mara Jade’s omission from the new footage may have been an oversight, but another potential reason was that George Lucas was allegedly not fond of the character.

Star Wars is, after all, Lucas’s own creation, and the director was reportedly not too fond of Luke Skywalker rejecting the Jedi Code and marrying Mara Jade. The Jedi are forbidden from forming emotional attachments at the risk of becoming vulnerable to the dark side — something fans know all too well from Anakin Skywalker’s fall from grace in Star Wars: Episode III – Revenge of the Sith (2005) when he fell in love with Padmé Amidala.

ScreenRant goes on to say:

According to the late J.W. Rinzler, a writer and executive editor for Lucasfilm, George Lucas disliked Mara Jade, despite her prominence in the pre-2014 canon. His reason for this was that Mara Jade eventually (and famously) married Luke Skywalker in 1997’s Hand of Thrawn novel duology. Although Luke and his Legends-era New Jedi Order eschewed Jedi celibacy, Lucas may have felt that this contradicted his ideas of Jedi Knighthood.

With The Walt Disney Company now in charge of Lucasfilm, it may be a good time for this fan-favorite character to show up in the canonical universe. However, back in 2009, George Lucas was interviewed by Total Film, later reported via CinemaBlend, and revealed his thoughts on the future of Star Wars, and well, it seems he really didn’t like Luke being married:

“And now there have been novels about the events after Episode IV, which isn’t at all what I would have done with it. The Star Wars story is really the tragedy of Darth Vader. That is the story. Once Vader dies, he doesn’t come back to life, the Emperor doesn’t get cloned and Luke doesn’t get married …”

The Legends character was just one part of the growing Skywalker family. Han Solo and Leia Organa Solo had children including Jacen Solo, Anakin Solo, and Jaina Solo. Every Star Wars fan will know that the canon universe introduced Adam Driver’s Ben Solo AKA Kylo Ren as Han and Leia’s child in the sequel trilogy which began with Star Wars: Episode VII — The Force Awakens (2015).

In fact, all signs do seem to point to Mara Jade’s imminent arrival in the Star Wars saga. Her unique connection to Grand Admiral Thrawn in Star Wars Legends is sure to come into play when the former character eventually debuts in live-action.

Rosario Dawson’s Ahsoka Tano went to war with Corvus Magistrate Morgan Elsbeth in Jon Favreau’s The Mandalorian, eventually naming her “master”, Thrawn. With Ahsoka coming to Disney+ sometime in the near future, it’s a good bet that the Star Wars villain may show up here — in fact, most of the Star Wars Rebels cast may indeed show up, too.

Then there’s the recently concluded The Bad Batch which not only hinted at Star Wars giving context to the greater Skywalker Saga timeline but also paved a way for Mara Jade to make an authentic entrance. By including Mount Tantiss — Palpatine’s secret cloning base from Legends — Dave Filoni’s latest animated series has given Star Wars the key to a whole host of new characters.

In addition, there’s the reported Luke Skywalker series and the talk of Marvel’s Sebastian Stan (The Falcon and the Winter Soldier) taking on the role of a young Luke Skywalker to also contend with. The Mandalorian set up the famous Jedi to have a bigger role in training Grogu in the Season 2 finale, and while Mark Hamill did return (albeit via de-aging CGI) it would be surprising to see Lucasfilm carry that technology through an entire miniseries.

And, finally, there’s the ongoing, long-standing rumor that Brie Larson (Captain Marvel, Room) will be cast as Luke Skywalker’s wife. It makes sense that Lucasfilm could be possibly eyeing up a big name for the role if the character is set to be a big part of the Star Wars universe moving forward.

With the aforementioned points, as well as a strong fan-following, Mara Jade’s time in the live-action Star Wars canon could be coming soon.

Would you like to see Mara Jade appear in Star Wars canon? Let us know in the comments!