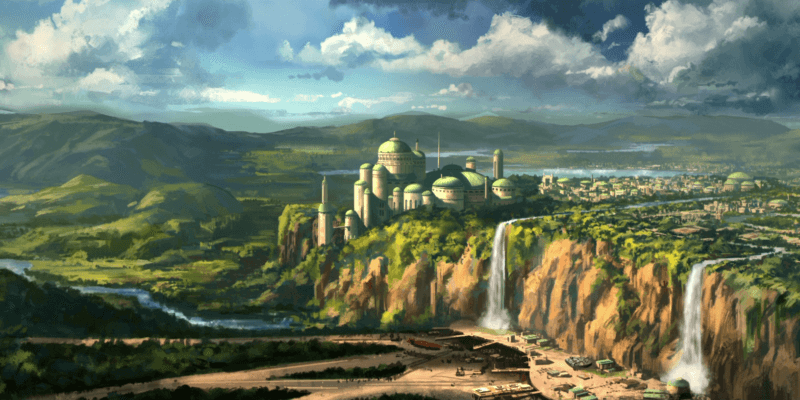 There’s a lot happening on the Star Wars front these days, from live-action shows such as The Book of Boba Fett to movies like Rogue Squadron and other untitled projects. And while things aren’t quiet on the video game side of things, either, with the likes of LEGO Star Wars: The Skywalker Saga on the horizon, it’s easy to forget the upcoming open-world Star Wars game.

While little is known about what is currently dubbed The Star Wars Project, we do know that we’ll be able to explore the faraway galaxy. And we know that Ubisoft will also be publishing the open-world game Avatar: Frontiers of Pandora, whose trailer is remarkable, to say the least. So if that trailer alone is anything to go by, we could be in for something really special with the Star Wars game.

On the official Ubisoft website, the game is described as “a new story-driven open-world video game set in the Star Wars galaxy”, which is calling upon “some of the most experienced talents in the video game industry”, with the goal to “deliver a groundbreaking Star Wars adventure.” Not much else is said about the project, and a release date is as about as unknown as Yoda’s species.

But it still sounds pretty exciting, even if it isn’t much to go by. On the other hand, fans are finally being promised an open-world Star Wars game, so it might be reasonable to assume that we’ll be able to do a great deal in the game. After all, the faraway galaxy has countless worlds at its disposal. But what else will players be able to do? Better yet, what do we want to do in the game?

First and foremost, we need to address the bantha in the room – this game is going to be open-world! And this isn’t up for speculation – it has been confirmed on the official Ubisoft website. This will mark a first for Star Wars in gaming, which to date has been an incredibly rich and versatile universe in its own right. But while there have been all sorts of games over the decades, none of them have given players the chance to explore the faraway galaxy.

So what does this mean? How many planets will we be able to visit? Which planets will the game feature? Will more become available via downloadable content? Or will the entire galaxy be at our disposal as soon as we hit play? However this unfolds, we just hope we’ll be able to explore planets in their entirety. Whether it’s Tatooine, Coruscant, Naboo, Mon Cala, Kamino, Kashyyyk, or Mandalore, we don’t want any invisible walls standing in our way!

This is something that goes hand in hand with visiting and exploring planets, and is also a signature Star Wars experience, whether it’s in one of the many movies or TV shows or on rides such as Millennium Falcon: Smugglers Run and Star Tours – The Adventures Continue. Having this feature in the open-world game would allow players to feel like they’re traveling from one world to the next, which would make the game feel even more immersive.

On the other hand, it’s fair to say that the game is going to be pretty enormous in size, so if we have to sacrifice experiencing real-time travel between planets for loading screens, then we wouldn’t complain too much – not if it means having more worlds to explore! Nevertheless, boarding a ship and jumping into hyperspace would add such a rich layer to the game. Jedi: The Fallen Order even has this to some extent, so perhaps it’s not out of the question.

It goes without saying that any Star Wars game should probably allow players to use the Force. There have been countless titles whose lead characters have been Jedi, and it would feel a little strange to finally get our hands on an open-world Star Wars game and not be able to channel the powers of the Force through our avatar. With that said, we also think it would be refreshing to not play a Jedi – or at least have the option to choose.

Either way, the Force is such a powerful foundation of the Star Wars universe, that a game without it would feel a bit lacking. But as we said with wanting to experience space travel, if we have to trade a few things in exchange for being able to explore a faraway galaxy that has very little in the way of limits, we might need to accept the possibility that the Jedi won’t be at the heart of this game.

5. Experience the Passage of Time

Now, this is one feature we wouldn’t happily trade in because enjoying an open-world game isn’t just about visiting and exploring various locations – it’s also about a sense of believability. And nothing says believability more than being able to watch your character grow and age as they make their way through the galaxy. Not many open-world games have done this, but plenty includes the passage of time, such as a 24-hour clock and so on.

While this is probably going to be a given with the Star Wars game, we’d also love to be able to start off as a young character (or at least choose their age) and then experience their growth and development. If this is the case, then maybe the Jedi are the way. We might start out as a Padawan in the Jedi Temple on Coruscant, and over the years become a highly-skilled Jedi Knight! This might be wishful thinking, though, but never say never.

It might sound a little strange that we’re hoping for a Star Wars game that allows us to do ‘everyday things’, but when it comes to open-world games, it’s all about adding layers of realism that enable the player to immerse themselves as deeply as possible. And as is the case with experiencing the passage of time, this is something else many other open-world games already feature, with the most popular examples being Grand Theft Auto and Red Dead Redemption.

But what do we mean by ‘everyday things’? Well, we’re not talking about grocery shopping, but making sure your in-game character eats and drinks would be neat (unless of course we’re stranded in a Tatooine desert). Other things include having somewhere to live, whether it’s on-world or in a ship. Having your own living quarters where you can enjoy things like the HoloNet would make for a nice break away from all things life-threatening!

Having a game in which you can explore an entire galaxy sounds great, but it can fall short if all the nuts and bolts haven’t been tightened. We’re talking about A.I. – and no, we don’t mean droids (although they still fall under this category). NPCs (Non-Playable Characters) can sometimes be a bit of a deal-breaker when it comes to video games, especially open-world ones. How many times have we played a game where the NPCs just aren’t up to scratch?

There are really only a handful of games that impress on this front, with Red Dead Redemption 2 being the strongest example. What would be the point in being able to explore all the rich Star Wars worlds if its inhabitants don’t react properly to your presence and all the things you do? We want an open-world Star Wars game that’s living and breathing, and one that allows you to make many contacts and friends throughout the galaxy. And enemies too, of course!

While many fans want the open-world element first and the story second, sometimes such a game can only function at its highest potential if it’s driven by a compelling story. The good news is that The Star Wars Project will indeed be story-driven, which has been confirmed by Ubisoft. Unfortunately, we don’t have the details yet, but it’s going to be a lot of fun to speculate in the meantime. Will the game revolve around the Jedi, a bounty hunter, or someone new altogether?

Either way, having a story to guide us through the galaxy will at least help things seem a little less overwhelming – and feeling this way is never great for a game of large proportions, as it’s the kind of thing that makes you want to switch it off. Stories can ease players into the world that’s been created for them, and help them get to know where things are, all of which makes for a much better gaming experience. It also guarantees some pretty awesome cutscenes!

This is something we find just as exciting as the fact the game is going to be open-world. Being able to customize your very own Star Wars character would be a dream come true, and like countless other games that offer this feature, you’d be able to choose everything, from your avatar’s physical appearances to the clothes on their back. However, this is Star Wars we’re talking about, which means that we might even be able to choose a character that’s non-human!

Human, Twi-lek, Trandoshan, Wookie, Togruta, Gungan – imagine being able to choose any sentient species from the faraway galaxy and then modifying them till your heart’s content! And as The Star Wars Project is open-world, this feature shouldn’t be ruled out. With that said, there will likely be limitations – and we wouldn’t be surprised if avatars were strictly human. But regardless of the species, being able to create your own character would be the cherry on the cake.

What do you want from the open-world Star Wars game?