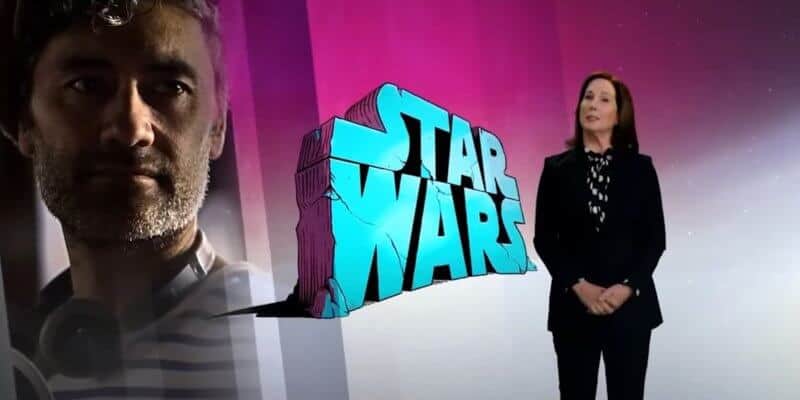 Waititi has periodically spoken out about his project — even as he finalizes work on his upcoming MCU installment, Thor: Love and Thunder (2022) starring Chris Hemsworth (Thor), Natalie Portman (Mighty Thor/Jane Foster), and various Guardians of the Galaxy alums like Karen Gillan (Nebula) — quipping that he “can’t wait to ruin” Star Wars for the notoriously fickle fandom and sharing that his script is “very me.”

Now, screenwriter Krysty Wilson-Cairns has spoken out about Waititi’s script — though she’s playing her cards pretty close to her chest. In one recent interview in which she was being pressed for details, Wilson-Cairns joked:

“It’s dangerous you’re asking these questions. You know if I answer incorrectly, Mickey Mouse will burst into this room and beat me up? And I was in therapy for years about that fear, so it’s clear and present.”

The Last Night in Soho writer did open up a bit to Variety about the process she, Waititi, and their team — who were previously scouting shooting locations in the British Isles — have been going through to make sure they get their Star Wars story right:

“You have to research, study and spend a lot of time to get it right. It’s really important to honor not only your commitment to it but also to the legions of fans out there.”

Although Waititi and his team are being super secretive about their project — possibly taking a page from Marvel Studios President Kevin Feige’s playbook — some astute fans think they’ve already figured out the upcoming movie’s plot thanks to the screens behind Kennedy at the aforementioned Investor Day event.

If Waititi’s movie is, in fact, set during the “First Migration” era, it would be thousands and thousands of years before any other films in the Star Wars universe, instantly opening up a whole new world of characters to explore.

A helpful description of Tho Yor reads:

…the name given to the eight great pyramidal ships that carried the Force-sensitive ancestors of the Je’daii Order [Jedi Order] to Tython in 36,453 BBY, in what was termed the First Migration. Following their arrival on Tython, the ships spread out around the planet and deposited their passengers onto the world where they constructed cities and temples at the spot of their arrival.

Intriguingly, Jon Favreau and Dave Filoni’s hit series, The Mandalorian, already made Tython a key location in the second season of the show. In fact, it is where Moff Gideon (Giancarlo Esposito) stole Grogu from bounty hunter Din Djarin (Pedro Pascal). Furthermore, Waititi has Mandalorian experience — he voiced droid IG-11 in Season 1 and directed the first season’s finale, “Chapter 8: Redemption”.

What do you think Taika Waitit’s Star Wars film is going to be about?

Comments Off on New ‘Star Wars’ Movie Script Teased, “Mickey Mouse Will Beat Me Up”