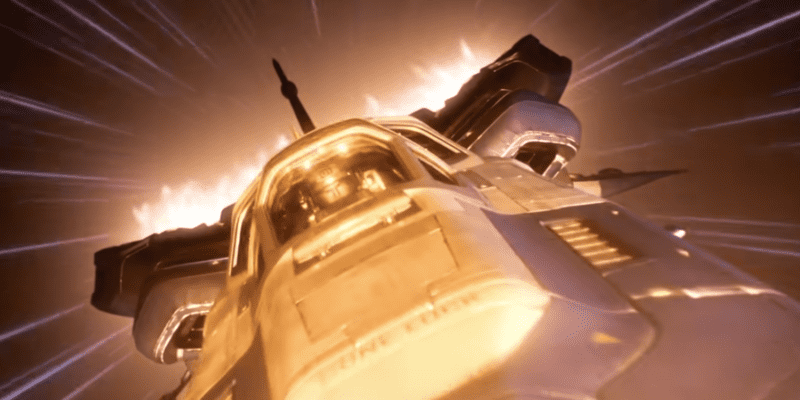 “To infinity and beyond” and “Long ago, in a galaxy far, far away” are arguably two of the most famous phrases in any movies that fall under The Walt Disney Company umbrella.

The former, of course, is Buzz Lightyear’s (Tim Allen) tagline in the entire Pixar Animation Studios’ Toy Story saga and the latter is the iconic line that leads the opening scroll on every film in the Star Wars Skywalker Saga, beginning with George Lucas’s Star Wars: Episode IV – A New Hope (1977).

What you might not expect is for the two worlds to collide, which is exactly what might be happening in Pixar’s upcoming animated movie, Lightyear, which is due to land on Disney+ on July 17, 2022. The film — which sees Marvel Studios star Chris Evans take over for Tim Allen — is set to tell the story of the man who is supposed to have inspired Andy’s Buzz Lightyear action figure in the classic Toy Story movies.

Recently, the first trailer for Lightyear dropped, and Star Wars fans couldn’t help but notice a number of similarities between the world the “real” Buzz Lightyear lives in and the Star Wars universe they know and love.

First, the opening scene of the trailer shows the Space Ranger’s ship being prepared for launch [above] and it appears to be powered by coaxium — that’s right, the same power source Tobias Beckett (Woody Harrelson) and Han Solo (Alden Ehrenreich) are after on Kessel in Disney’s Solo: A Star Wars Story (2018) [below].

Then, Lightyear seems to use hyperspace technology just like that in the Star Wars universe — you know, the tech that is constantly giving both Harrison Ford and Alden Ehrenreich’s versions of Han Solo fits? — as he blasts into outer space.

Another similarity too blatant to ignore is the fact that the main character in Lightyear [above] appears to visit Dagobah — the very same swamp planet [below] where Grand Master Yoda (Frank Oz) trained young Jedi Knight Luke Skywalker (Mark Hamill) in the greatest sequel of all time, Star Wars: Episode V – The Empire Strikes Back (1980).

While we don’t see the human version of Buzz Lightyear raise an X-Wing from the boggy depths of the apparent Star Wars planet, there’s no doubt that Pixar’s animation team didn’t create this setting on purpose during the Lightyear production process.

This is where things begin to get really interesting. While it’s tough to write the appearance of coaxium in the Pixar universe off as a coincidence, the aesthetic of a specific fictional planet could, perhaps, be considered a mere anomaly — but, then, in the trailer, we see Buzz Lightyear hanging out with a droid that looks a lot like the Astromech units seen in nearly every Star Wars story, from live-action icons like R2-D2 and C-3PO to Chopper and Todo-360 in animated series like Star Wars Rebels, Star Wars: The Clone Wars, and Star Wars: The Bad Batch.

For now, there’s nothing fans can do but wait to see if Lightyear is actually part of the Star Wars franchise, but it certainly seems that some of these seeming coincidences are too unlikely to simply brush under the rug.

If we see Grogu (AKA “Baby Yoda”) make a cameo appearance, we’ll know for sure that Pixar has created the ultimate crossover event…

You can watch the full Lightyear trailer below and get a sneak peek at Buzz Lightyear’s origin story:

Do you think the Star Wars Easter eggs in Lightyear are too blatant to disregard?