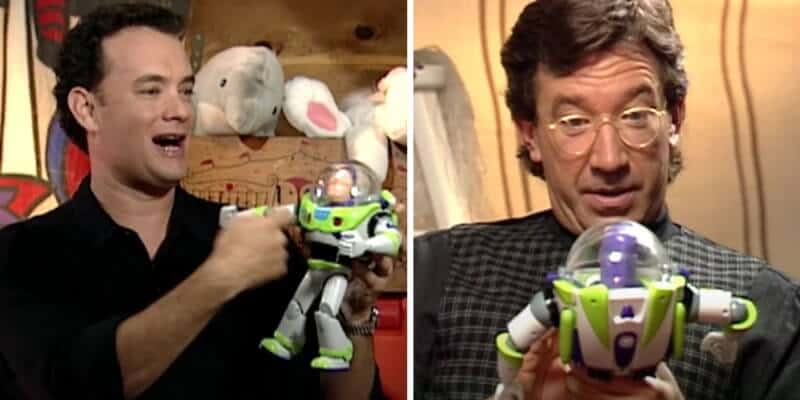 Whenever Disney fans get the chance to watch a new Disney animation whether it be a Disney or Pixar film, it is always exciting to hear the voice of what will soon become some of our favorite and most classic Disney characters.

The Pixar film Toy Story starring Tom Hanks at Sheriff Woody and Tim Allen as Buzz Lightyear did exactly that. And now, after four successful films, their voices have truly been locked into the Disney vault of beloved Disney characters that fans will cherish forever.

Most recently, Entertainment Tonight brought out a video from their vault that showcased the two actors reacting to their Toy Story action figures, and it was hilarious! But then again, then you have Allen and Hanks together, can we really expect anything less? The best part of this video was that the two were making fun of their cartoon selves, which would leave any fan smiling — especially coming from such a young version of the two Hollywood stars.

Tom Hanks picked up Buzz and noted, “I won’t even start with how this guy is built” “This is a toy that comes out and tells us civilization is coming to an end. The apocalypse is upon us when this,” Tom proceeded to press one of Buzz’s buttons, “is a form of entertainment.”

Tim Allen joined in on the fun and said “There’s a little lisp there Buzz”, which is a clear knock-on himself, of course, being the voice of the character. At one point the two laugh as they break open Buzz’s helmet! But in all seriousness, Tim Allen truly does love his action figure as he admitted to keeping his Buzz figure next to him while he sleeps.

When it came to Woody, the two were making fun of Woody’s lanky body saying with Tim Allen saying, “The body of Woody was actually modeled after Tom Hank’s body. So this is exactly what Tom Hanks looks like”.

All of this being said, no matter how much the two want to joke around, both actors are thankful to have had the opportunity to be in Toy Story.  Tom Hanks went on to tell a story of how his 30-year-old daughter saw Woody and Buzz Lightyear at Disneyland and burst into tears knowing that some version of her dad will live on at Disney for eternity, which even had me tearing up a little!

If you want to watch the full interview, click below!

Would you want to see more Toy Story films in the future?