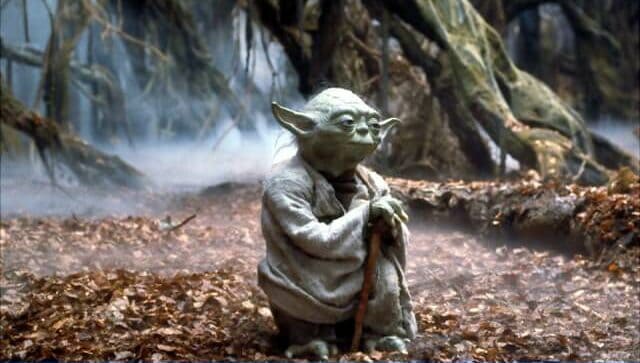 Star Wars fans first saw the now-famous Yoda puppet in Empire Strikes Back when young, untrained Luke Skywalker travels to the swamp planet of Dagobah to find the elusive Grand Master Yoda in hopes that he will teach him the ways of the Force.

After a strange and chaotic situation in which Yoda pretends to have no idea who Skywalker is, the older Jedi eventually reveals his true identity — and ultimately helps Luke realize just how powerful he is.

After all, no Star Wars fan can forget seeing Hamill’s character raise his X-wing from the murky waters of Dagobah for the first time.

Now, Yoda actor Frank Oz has shared that Yoda’s unique speaking style was never supposed to happen — he was taken by the dialogue in a single scene and asked Star Wars creator George Lucas if he could use the strangely stilted syntax for all of the character’s lines.

In a new interview, Oz said:

“It’s funny you ask about that because I was just looking at the original script of The Empire Strikes Back the other day and there was a bit of that odd syntax in it, but also it had Yoda speaking very colloquially. So I said to George, ‘Can I do the whole thing like this?’ And he said: ‘Sure!’ It just felt so right.”

It is unknown when Oz will return as Yoda , if the original Yoda will ever get the chance to meet pop culture icon, Luke Skywalker’s new Padawan Grogu (AKA “Baby Yoda”) in Jon Favreau and Dave Filoni’s The Mandalorian saga, or if the powers-that-be at Lucasfilm will ever let us in on what Yoda’s species actually is.

What do you think about this revelation about Yoda’s speech?