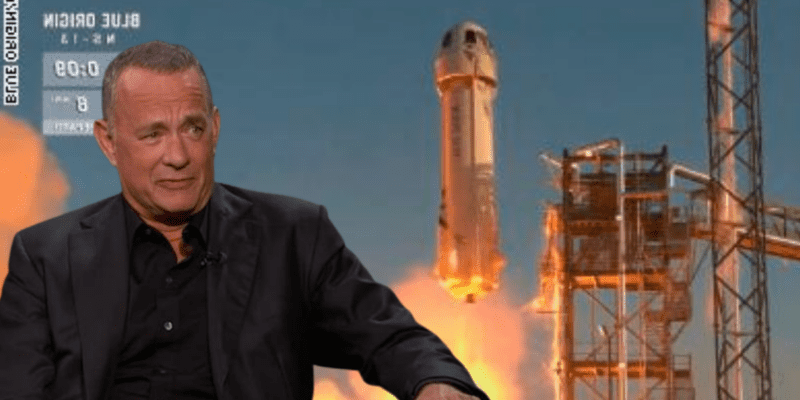 It seems it’s not only Buzz Lightyear who has the option to go space – apparently, Woody was also recently given the opportunity.

Back in October, Jeff Bezos’ Blue Origin took to space with Star Trek’s Captain Kirk himself, actor William Shatner, aboard. Shatner not only broke the sound barrier but also the record for being the oldest person to ever travel into space.

Now, Tom Hanks has revealed he was originally offered the seat aboard the Shepherd shuttle.

Known for his famous portrayals of Forrest Gump, Walt Disney in Saving Mr. Banks (2013), and as the voice of Sheriff Woody in Pixar’s Toy Story franchise, Tom Hanks is a beloved Hollywood actor.

One of his most popular roles was as Apollo 13 Commander Jim Lovell in Apollo 13 (1995) alongside Bill Paxton and Kevin Bacon, and it seems Jeff Bezos wanted to give Hanks an actual opportunity to travel into space.

Appearing on Jimmy Kimmel Live!, Hanks revealed that the Amazon billionaire approached him about a spaceflight before asking Star Trek‘s William Shatner.

Kimmel asked if the rumor was true, and Hanks replied: “Well, yeah, provided I pay.”

Hanks continued to mock billionaires going to space, dismissing the idea by saying anyone could replicate the spaceflight concept themselves:

“You know, we could simulate the experience of going to space right now. It’s about a 12-minute flight — is that about it? We could all do it in our seats right here. I don’t need to spend 28 million bucks to do that. I can do that at home.”

Hanks then proceeded to mimic the flight experience on the Jimmy Kimmel guest chair, simulating take-off and loss of gravity.

Kimmel further asked Hanks if he would consider boarding a spaceflight if it were free, to which Hanks replied: “I would do it on occasion just in order to experience the joy — pretending I’m a billionaire.”

While Toy Story‘s Tom Hanks turned down Bezos’ invitation, he is believed to be among a group of celebrities who have reserved tickets worth up to $250,000 to travel aboard Richard Branson’s commercial spaceliner Virgin Galactic, according to Insider.

It has been reported that Leonardo DiCaprio, Brad Pitt, Justin Bieber, Russell Brand, Lady Gaga, Katy Perry, and Marvel’s Eternals (2021) actress Angelina Jolie are among those who have bought Virgin Galactic tickets.

Star Wars fans are debating whether Luke Skywalker himself — Mark Hamill — should be next to have a space adventure.

You can watch the full interview with Jimmy Kimmel below:

Do you think Tom Hanks should be next into space? Let us know in the comments.