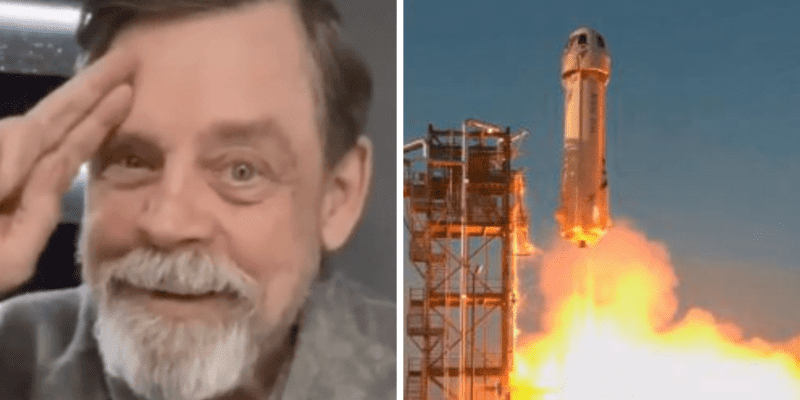 It seems that space travel for us non-astronauts is now a reality, and speculation continues to grow as to who will be next for a galactic launch.

Star Trek’s Captain Kirk himself, William Shatner, broke records this week with his 10-minute visit to the stars aboard Jeff Bezos’s Blue Origin shuttle Shepherd, becoming the oldest person ever to travel into space.

And now, Star Wars fans are debating whether Luke Skywalker himself — Mark Hamill — should be next to have a space adventure.

With 40 years under his belt playing the famous Jedi Knight Luke Skywalker, Hamill appears to be on every Star Wars fan’s mind. Space travel and Star Wars (1977) go hand in hand, so it has fans telling Hamill, “‘Yoda the one’ to go next!”

One Star Wars fan, Daniel I. Pedreira, exclaimed on Twitter:

It would also be cool to see @HamillHimself go to space! #StarWars #LukeSkywalker

While another user, Garrett, requested something that would get even the most minor Star Wars fan excited:

Unfortunately, given Ford’s disdain for the Star Wars franchise, it seems unlikely that he wants to literally become Han Solo.

Of course, Mark Hamill himself, an avid social media user, responded to the cosmic discussion, quipping:

“Not sure how to feel about so many people suggesting I be shot into space.”

Not sure how to feel about so many people suggesting I be shot into space.🚀🤔

Straight away, fans replied to Hamill’s post, as they always do. One user going by Glynnisl commented on the rivalry between Star Trek and Star Wars fans, laughing:

I’d bet the majority are saying it from love. 🙂 We both know there’s a percentage of people who can’t stand for Star Trek to have one up on Star Wars, tho.

What about dressed as Luke Skywalker??

Star Wars fan, Jenn, had to use the Star Wars actor’s name to explain the Shatner launch itself to her children — who are clearly not Trekkies:

My kiddo didn’t know who Shatner was so I explained “it would be like if they shot Mark Hamill into space!” and he then understood COMPLETELY!!!!

Of course, Grogu (AKA “Baby Yoda”) from the Disney+ series The Mandalorian has already been launched to space, with the SpaceX Crew-1 harnessing the Force back in November 2020.

Star Trek and Star Wars fans have had a fun rivalry since the 1970s, when George Lucas released his first movie Star Wars: A New Hope (1977), starring Hamill, Harrison Ford, and Carrie Fisher. William Shatner played USS Enterprise leader, Captain Kirk, in the original Star Trek series beginning in 1966, serving as an explorer for Starfleet under the United Federation of Planets.

Shatner’s costar, George Takei (Hikaru Sulu) has even been part of the Star Wars franchise on two different occasions — first in Dave Filoni’s Star Wars: The Clone Wars and most recently in the anime series Star Wars: Visions.

We’ll keep you posted to see if Mark Hamill is sent to a galaxy far, far away, but if he does, let’s hope he’d “Lando” safely on the ground afterward!

Who do you think should be next to go to space? Should it be a Star Wars star? Let us know in the comments!