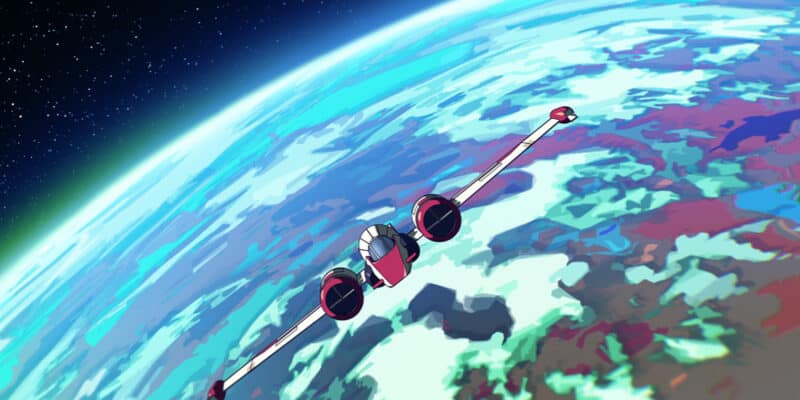 For years, fans who love both anime and the Star Wars universe have been hoping for a project that combines the two popular forms of entertainment.

Now, thanks to Star Wars: Visions — announced by Lucasfilm President Kathleen Kennedy last December at the 2020 Disney Investor Day event and premiering on Disney+ on September 22, 2021 — these fans are about to see their wish fulfilled for the very first time.

What is Star Wars: Visions?

Star Wars: Visions is the first-ever anime-inspired series in the Star Wars franchise. The original Tweet announcing the project reads:

Star Wars: Visions, an Original Series of animated short films, celebrates the @StarWars galaxy through the lens of the world’s best Japanese anime creators. Coming in 2021 to @DisneyPlus.

Star Wars: Visions, an Original Series of animated short films, celebrates the @StarWars galaxy through the lens of the world’s best Japanese anime creators. Coming in 2021 to @DisneyPlus. pic.twitter.com/lmCZGSHEhY

The artwork of Star Wars: Visions is done in the anime style, a form of animation that is particularly popular in Japan, but has aficionados all over the world.

Related: ‘Star Wars’ Is About to Get a Brand New Lightsaber

The dictionary also notes that the term “anime” was first used in 1985.

Each of the nine episodes of Star Wars: Visions is expected to stand alone — though some Star Wars fans believe that the tales told in these installments are actually related to the literal visions Jedi Master Qui-Gon Jinn (Liam Neeson) had about the Jedi Order.

This remains unconfirmed but is a fascinating theory about how Visions could theoretically tie into the Star Wars canon.

One helpful guide to each episode has shared the following synopses:

Episode 1: “The Duel” by Kamikaze Douga

Following a former Sith who goes by the name Ronin, otherwise known as a wandering samurai in Japanese culture, “The Duel” sets up a fight that will draw from Japanese lore to re-imagine this world. This story will be expanded in the novel Ronin by Emma Mieko Candon which releases Oct. 12, 2021.

Ocho is a part of a space yakuza family. Lop, a bunny hybrid, is her companion. Together the two do what they must to protect each other. This episode is set between Revenge of the Sith and A New Hope.

Described as a rock opera, “Tatooine rhapsody,” is a concert episode that will include appearances by Jabba the Hutt and Boba Fett.

Episode 4: “The Twins” by Trigger

Taking place at the end of the Skywalker saga, “The Twins,” follows two siblings raised by the remnants of the Imperial Army. Yes, we’re talking Dark Side of the Force twins.

Episode 5: “The Elder” by Trigger

Set in a time before Phantom Menace, “The Elder” focuses on a Jedi and padawan. The pair come across a mysterious person who they must oppose.

As the title makes clear, we’re in for a Star Wars wedding in “The Village Bride.” Where this wedding takes place and who’s involved hasn’t been revealed.

Keeping with the theme of a union, “Akariri,” is an ill-fated love story between a Jedi and a princess.

The lone story focused on a droid in the anthology, “T0-B1,” is a coming-of-age story where the protagonist in question discovers he can do and be more than he once thought.

The second episode to be set after The Rise of the Skywalker, “The Ninth Jedi,” focuses on the next leg of the story involving the Jedi Knights and the fall of the New Order.

The official Star Wars website has recently been giving fans background information on many of the new characters who the team of visionary storytellers behind the project will be introducing in the Star Wars: Visions series.

Some of these newcomers in the anthology series include:

Each of these short films promises to deliver bold storytelling the likes of which Star Wars has never before seen. This anime anthology series is the first of its kind within the Star Wars galaxy, but it is very likely to not be the last.

You can watch the official trailer for Lucasfilm’s collaborative anime anthology series below:

Are you looking forward to Star Wars Visions?

Comments Off on Everything You Need to Know About ‘Star Wars: Visions’, Lucasfilm’s NEW Series