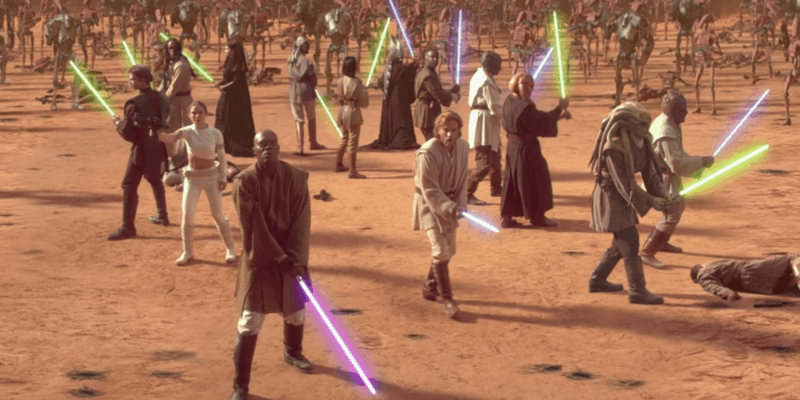 As part of the impressive announcement at the end of 2020, Lucasfilm President Kathleen Kennedy revealed the many projects Star Wars fans will encounter in the next few years. One of the series that will debut this year is Star Wars: Visions.

Just recently, Star Wars revealed a sneak peek at some of the characters from the upcoming series as well as what the short films might have in store for fans. And one thing that may look a bit different for the first time in a while is the lightsaber.

The new anthology television show set in the Star Wars Universe is being created by a slate of filmmakers with seven Japanese anime studios taking part in the series’ nine-episode run. Star Wars: Visions — while taking elements of Star Wars history, lore, and mythology –is not set in the current timeline. In fact, a previous panel at Anime EXPO Lite confirmed that the Japanese studios had no boundaries when creating their short films for the new Disney+ show. StarWars.com says:

In developing the series, Lucasfilm made the decision to let creators tell the stories they wanted to tell — whether they featured established or original characters — without a need to tie into the larger chronology.

“We really wanted to give these creators a wide creative berth to explore all the imaginative potential of the Star Wars galaxy through the unique lens of anime […] We realized we wanted these to be as authentic as possible to the studios and creators who are making them, made through their unique process, in a medium they’re such experts at.”

While not set in the current Star Wars timeline, the opportunity to create anything within the walls of Star Wars is sure to delight fans looking for a fresh take on the iconic space opera. Visions is likely to provide a respite from the crowded canon timeline that Star Wars is currently navigating.

And, yes, The Mandalorian is doing wondrous things in terms of uniting a divided fandom by exploring the fledgling years of the galaxy post-Galactic Empire. However, the completely untethered Visions may allow for audiences to view Star Wars in a different light, made by completely different filmmakers, and through an anime lens of Star Wars storytelling.

One of the elements Visions promises to explore is the item synonymous with the Jedi themselves: lightsabers. The signature weapon of the Jedi and Sith has had many iterations over the years. From its iconic first arrival in Star Wars: Episode IV — A New Hope (1977) to Darth Maul’s duel-lightsaber in the prequel trilogy, and Kylo Ren’s flared triple-blade in the sequels, lightsabers are an important part of the Star Wars mythos — and an incredibly popular toy and collector item.

Now, Star Wars has confirmed that the lightsaber will get a refresh this year when the anime anthology series debuts. In a new article on StarWars.com, executive producer, Josh Rimes (The Bad Batch) and producer, Kanako Shirasaki, have revealed some of the new characters fans will meet in Visions, as well as the bold storytelling that brings them to the galaxy.

Speaking about The Ninth Jedi from Production I.G., the two producers share that the iconic lightsaber may look a bit different this year. The Ninth Jedi “imagines a galaxy in which the Jedi Order is long gone, but a mysterious master named Juro hopes to revive it. And central to this possible Jedi renaissance is Kara”.

On lightsabers, the producers say:

“Kara’s father is a legendary lightsaber-smith, which is totally unique to this tale,” Rimes tells StarWars.com. “The lightsabers he makes are also different from anything we’ve seen before in Star Wars. Writer/director Kenji Kamiyama really leaned into this new and different vision of what a lightsaber can be and how it can reflect the nature of those who might wield it.

It will be interesting to see what changes Production I.G. and Kamiyama make to the lightsaber and how it fits within the story of The Ninth Jedi. StarWars.com goes on to tease the scope of the upcoming short film:

In “The Ninth Jedi,” the stakes will be high for both the galaxy and Kara. Rimes and Shirasaki promise it will be an adventure long remembered.

“Kara’s journey is an epic one that brims with the scale and excitement one would expect from a feature film,”

We can see from the Visions trailer that there is a lightsaber-looking object being loaded, more akin to a blaster than the Jedi sword fans have come to know from Star Wars. In another instance, there is a huge, rotating weapon made up of multiple lightsabers. But it is the end of the trailer that gives the best look at what The Ninth Jedi might have in store for lightsabers, as a character that seemingly looks like the aforementioned Kara is wielding a lightsaber with a Samurai sword influence.

Star Wars: Visions debuts September 22, 2021. You can watch the trailer below:

Are you excited for Star Wars: Visions? Let us know in the comments!