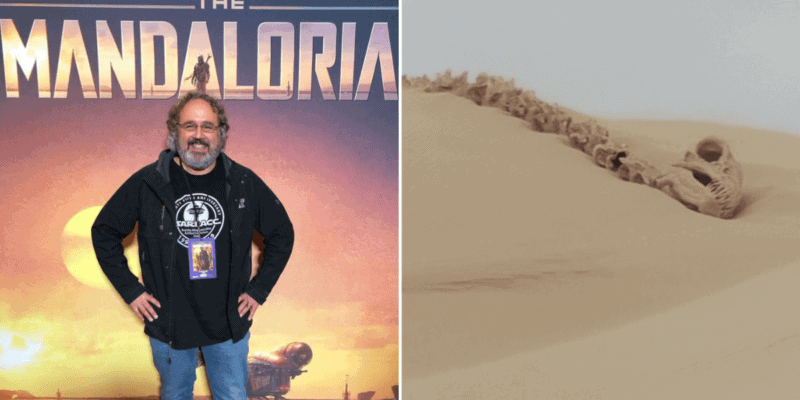 The year is 1977, Star Wars has just opened in theaters, and a global phenomenon has been launched.

Some fans celebrate their favorite characters through cosplay — like this unreal Carrie Fisher lookalike. Others show their adoration by recreating the famous John Williams Star Wars anthem with a Western twist. This one fan recreated a viral TikTok meme featuring The Mandalorian duo, Din Djarin and Grogu AKA Baby Yoda. Someone even built a real-life Razor Crest.

And, then, other fans take a storage container to the Sahara desert in Tunisia to loot a bunch of Star Wars set pieces.

It’s easy to get wrapped up in the Hollywood-ness of the Star Wars franchise — from casting relative unknowns in the leading roles to the two direct sequels A New Hope spawned to the worldwide takeover making George Lucas a directing mega-star. And, yet, the thing that has kept the Star Wars saga afloat for over four decades is the fans.

One of the biggest parts of the Star Wars universe, outside of its blockbuster movies, is arguably its ever-growing — sometimes ultra-rare — collectible and toy collections. Over the last 40 years, Star Wars has released a mammoth amount of collectible memorabilia — like the Hasbro Black Series action figures or the many LEGO sets now available — and with such a plethora of things to buy, trade, and sell, Star Wars collecting has become almost an industry in itself.

Among the space opera super-fans is long-time collector — and founder of The Star Wars Collector Archive – Gus Lopez. Lopez started his gigantic collection around the time Star Wars: Episode IV – A New Hope released when the world was introduced to heroes like Jedi Luke Skywalker (Mark Hamill) and the new big bad, Darth Vader (Dave Prowse). Speaking in an interview, Lopez revealed what brought him to the Star Wars franchise in the first place:

“It’s hard to point to one thing, but Star Wars just hit me at a visceral level when I first saw it in 1977 and my life has not been the same since.”

“That first ground-breaking movie was unlike anything anyone had ever seen before and presented such a rich universe with different planets, aliens, robots, spaceships, and characters for further adventures and lots of things to collect!”

Lopez isn’t wrong. A New Hope, or just Star Wars as it was originally called, was such a surprising hit that director George Lucas hadn’t foreseen its overwhelming success, stating that it wasn’t until he saw the queues at the Mann’s Chinese Theater on Hollywood Boulevard that he really understood the power behind the space opera movie he’d created.

Introducing heroes like Luke Skywalker, Han Solo (Harrison Ford), and Princess Leia Organa (Carrie Fisher), Star Wars changed the face of the science-fiction genre. It made weapons like lightsabers, aliens called Wookiees and otherworldly planets like Tatooine, household names. It also coined the iconic Jedi phrase, “May the Force be with you”. Collector Lopez commented that one of his favorite locations to scout for set pieces is the Tatooine location itself, Tunisia:

“My favorite Star Wars destination was in Tunisia, where they filmed for the planet Tatooine, which is featured in several of the movies. On some of my trips, I was able to secure film props such as the Krayt Dragon skeleton from Star Wars: A New Hope and moisture vaporators and Mos Espa doors from The Phantom Menace.”

Reportedly, on one of these trips to Tunisia, Lopez took a shipping container to the North African country to secure as much Star Wars loot as possible. Speaking with Den of Geek, another toy collector — and The Toys That Made Us (2017) creator — Brian Volk-Weiss, revealed Gus Lopez is rather famous in the Star Wars collecting circles. When asked about the “epic lengths that someone has gone to pursue an item”, Volk-Weiss said:

“I think Gus Lopez going to Tunisia with a storage container. That’s probably my favorite. I mean, he literally went all around Tunisia to the sets and was buying stuff off the people that own the land. The sets are still there.”

You can almost imagine Lopez searching the Tunisian dunes for set pieces like the Jawa on Tatooine, or like Jedi Rey Skywalker (Daisy Ridley) on Jakku in the sequel trilogy. Revealing to The Telegraph, Lopez managed to track specific set locations to begin his hunt:

“I brought back huge fibreglass bone pieces they left out in the desert, for the scenes when they first land on the planet.”

Star Wars fan Lopez — who’s memorabilia-stuffed Seattle home is known as the Bobacabana — went on to describe how he managed to get his hands on some of the one-of-a-kind set pieces:

“Some of it was just wandering about in the middle of the Sahara, […] But there were also a bunch of kids in the area. I made it clear I was interested in buying and would come back tomorrow. They kept bringing me pieces. I got a ton of stuff.”

Aside from his exploits overseas and his ongoing crusade to collect as many Star Wars items as possible, Lopez also owns the original Death Star model used in the movie. He revealed how some other fellow collectors tracked it down to an antique store, and after much research to prove it was in fact the real deal, went back to buy the priceless item only for it to have been sold to another local music store.

“Years later, Todd, Pat, and Tim were discussing the Death Star and had heard that the music shop had gone out of business. They went down there to see if they could find it and when they arrived, they saw that everything at the store had been liquidated except the Death Star, which was being used as a trash can.”

The Star Wars super fan ended up buying the Death Star model from the collectors who rescued it from its trash can legacy where it still lives in his house.

The world of Star Wars collecting seems to operate on another plane, where blaster pistol replicas and character costumes are the currency. There is even a reported “grey market” which features things that should never have left the set. Collector Jason DeBord told The Telegraph that there is a kind of underground Star Wars collectible operation:

“The most interesting pieces are things people will never talk about publicly because they’re afraid Lucasfilm might come knocking. One of the best I’ve seen is a ‘hero’ (made for close-up) Lightsaber from the original trilogy.”

Volk-Weiss also alluded to the more exclusive Star Wars collecting groups, revealing there is a private Facebook group called “Deal or No Deal”. The group — which allegedly only has 3,000 members — sees its very high-end items, mainly Star Wars toys, “sell in the six figures.”

However, it seems unlikely that Lucasfilm will come knocking. With their crowded slate of upcoming Disney+ shows like Obi-Wan Kenobi, The Book of Boba Fett, and Lando — the Lando Calrissian spin-off miniseries — the Star Wars production company has its sights set on streaming domination. The former also sees the return of Obi-Wan’s former Padawan, Anakin Skywalker / Darth Vader (Hayden Christensen) to the live-action universe in a Star Wars story following the events of Star Wars: Episode III – Revenge of the Sith (2005) in the prequel trilogy of the Skywalker Saga.

Lopez is arguably one of the definitive Star Wars collectors. To celebrate May the Fourth (AKA Star Wars Day), — if Lopez isn’t rewatching his favorite Star Wars movie or Boba Fett’s appearance in the Star Wars Holiday Special — he opens up the Bobacabana to other fans for private tours of his collection. He even has electronic lightsabers connected to his Amazon Echo Dot and uses Alexa to ignite them.

It’s safe to say Star Wars has loyal fans, if not the most loyal in the galaxy. What is clear, is that no matter how polarizing the Star Wars franchise is or becomes, it will always have dedicated followers to keep George Lucas’s dream alive.

Do you collect any Star Wars items?