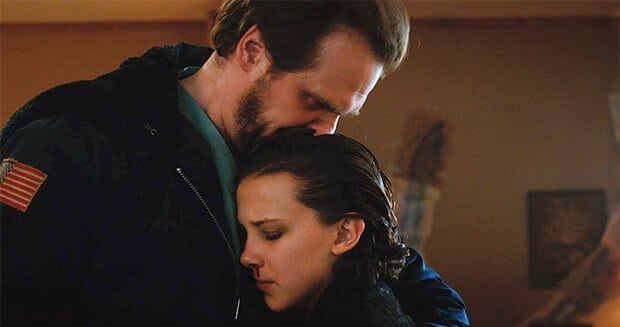 Stranger Things actress Millie Bobby Brown was just 12-years-old when she was thrust into the spotlight in the hit Netflix series. In recent weeks, the young woman — who is now 17 — has found herself in the limelight again, for all the wrong reasons.

In a now-deleted video, TikTok sensation Hunter Echo (Hunter Ecimovic) claimed that he had been “living in Millie’s house for eight months” while dating her. He also claimed the minor initiated the rumored relationship between the two.

Brown’s camp has adamantly denied the claims, calling Echo’s comments, “dishonest but also are irresponsible, offensive, and hateful.” Brown herself has not publicly addressed the ongoing situation at this time.

Her Stranger Things costar David Harbour (Black Widow), however, has recently spoken out about his “real worry” about the starlet.

Before his Marvel Cinematic Universe debut as Alexei Shostakov/The Red Guardian, Harbour was most well-known for his role as Brown’s adoptive “father” Jim Hopper in the popular science fiction drama.

The actor recently appeared on the That Scene With Dan Patrick podcast and said:

“[Millie and I] have always had sort of a special relationship because I knew her when she was so young. I knew her before any of this big fame hit…[I have] a real protective feeling for her. I have a real, like, worry. I worry about her and the fame and all that she has to struggle with. And I’ve just always felt this kind of deep fatherly affection for her.”

Despite speaking out about Brown’s recent struggles, Harbour has not yet issued a public statement regarding Black Widow costar Scarlett Johansson’s $50 million lawsuit against The Walt Disney Company.

In her suit, Johansson alleges that Disney ignored a clause in her contract that the Phase 4 Marvel movie had to have an exclusive theatrical release. The Avengers franchise prequel film — set between the events of Captain America: Civil War (2016) and Avengers: Infinity War (2018) — released simultaneously in theaters and on the Disney+ Premier Access tier on July 9, 2021.

What do you think about David Harbour’s comments regarding Millie Bobby Brown?