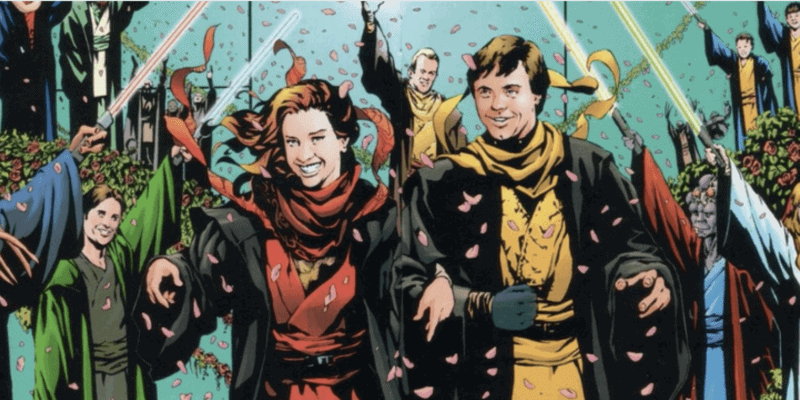 William Shatner has had a long career that began in 1951. Of all of his roles, though, Star Trek‘s Captain Kirk has defined him. Trekkies everywhere still put Shatner on a pedestal thanks to his decades-long portrayal of the popular sci-fi character.

It all started when a Twitter user named Bill Erickson posted:

Luke was a Jedi. Jedi are like Monks. He spent his life studying the Force. Not relationships.

Luke got married in SWs canon, so unless Tatooine was repressive & he was hiding it looks like he chose a woman named Mara.

Luke got married in SWs canon?? so unless Tatooine was repressive & he was hiding it looks like he chose a woman named Mara. https://t.co/NBtYXk7V1X pic.twitter.com/3kO6lzK3mb

In reality, the Thrawn Trilogy and other Star Wars Legends materials featuring Mara Jade are not part of the current Star Wars canon, but Shatner’s point stands (plus, read on for how all of this could change soon!).

Actor Mark Hamill, who has played the iconic Jedi in the Star Wars franchise for over 40 years, has not yet chimed in regarding the situation. But, given how active Hamill is on social media, his response could very well be coming soon.

The actor even said as much following the final Skywalker Saga film, Star Wars: Episode IX – The Rise of Skywalker (2019). Then, he shocked the Star Wars fan community (and Bo-Katan Kryze actress Katee Sackhoff) by making an incredible cameo appearance in The Mandalorian Season 2 finale episode (“Chapter 16: The Rescue”).

Now, Skywalker is seemingly back in the Star Wars universe, at least for the time being — as Grogu’s (AKA The Child AKA Baby Yoda) new Jedi Master, it seems unlikely that Skywalker was back for just one scene.

Whether or not a CGI version of Hamill will be used moving forward, however, remains to be seen. Many Star Wars fans want to see Sebastian Stan — famous for playing Bucky Barnes/Winter Soldier in the Marvel Cinematic Universe — as a young Skywalker.

The Marvel actor bears an uncanny resemblance to Hamill in his younger years.

Currently, there are rumors that a Luke Skywalker spinoff series could be in development at Disney+. It would likely follow the famous character’s work at his new Jedi Temple. Ironically, this series would reportedly make Skywalker’s Star Wars Legends wife, Mara Jade, canon.

This is unconfirmed, but it is also possible that the Jedi Knight and Grogu could appear in The Mandalorian Season 3 or one of its three confirmed spinoffs — Ahsoka, Rangers of the New Republic, and The Book of Boba Fett.

When bounty hunter Din Djarin (Pedro Pascal) said goodbye to his tiny foundling, he promised he would see him again — we just don’t know exactly when or how. It does, however, seem unlikely that Grogu’s next appearance will be in Ahsoka with Rosario Dawson’s Ahsoka Tano or in The Book of Boba Fett alongside Temuera Morrison’s version of the bounty hunter.

Related: Who – or What – Are the New Yellow Stormtroopers in ‘The Mandalorian’?

But, Mandalorian showrunner Jon Favreau and executive producer Dave Filoni more-or-less assured us that we’ll see the Force-sensitive duo again at some point in the Mandalorian saga.

What do you think? Is Luke Skywalker back in the Star Wars universe for good?