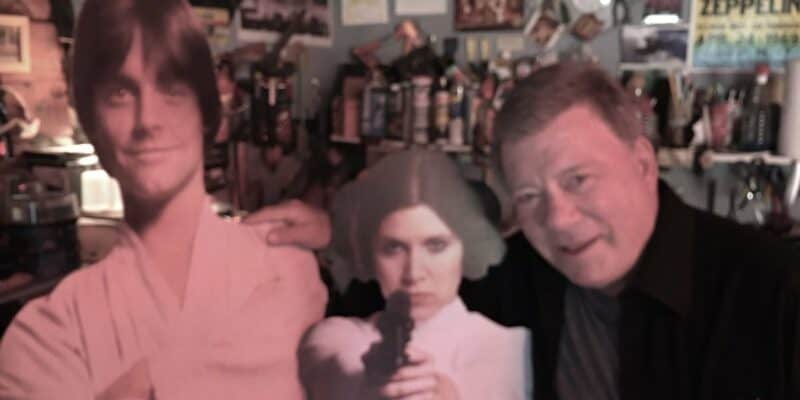 Not long ago, Shatner defended Luke Skywalker’s right to a relationship — with none other than Star Wars Legends character Mara Jade Skywalker, who could be making her live-action debut soon — in spite of the Jedi Order’s strict code against emotional attachment.

You know what happened to Anakin Skywalker, right? Yeah, it wasn’t pretty.

Now, the Hollywood legend — who first appeared in  Star Trek: The Original Series from 1966 to 1969 — has taken a jab at a galaxy far, far away during a Halloween-themed scary movie challenge on Twitter.

DAY 3 OF 31 SCARY SCENES THAT MADE AN IMPACT THE FIRST TIME I SAW THEM.

Fueller’s contribution was a still image from Universal Studios’ iconic horror film The Creature From The Black Lagoon (1954). Shatner, though, poked fun at his friends from the Star Wars galaxy with a picture of the classic opening crawl that appears throughout the Skywalker Saga and was originally made famous in Star Wars: Episode IV – A New Hope (1977):

Here’s my contribution of a real scary scene

Here’s my contribution of a real scary scene 👇🏻😘 https://t.co/1IqQ1WvR8k pic.twitter.com/KzV5WUZeaj

Clearly meant in good fun, Shatner included a kissy face emoji to show his love for Lucas, Mark Hamill (Jedi Knight Luke Skywalker), Harrison Ford (Han Solo), the late Carrie Fisher (Princess Leia), and the rest of the cast and crew who have made Star Wars great over the last 43 years.

Takei previously made an appearance in Season 1 of the aforementioned Star Wars: The Clone Wars as Separatist Neimoidian General Lok Durd.

Siddig appeared in all seven seasons of Star Trek: Deep Space Nine, while Takei first appeared alongside Shatner and other famous faces like Leonard Nimoy (Spock), then went on to reprise the role numerous times in projects like Star Trek VI: The Undiscovered Country (1991), Star Trek IV – The Voyage Home (1986), and the famed Star Trek II: The Wrath of Khan (1982).

What do you think about “Captain Kirk” making fun of Star Wars movies?