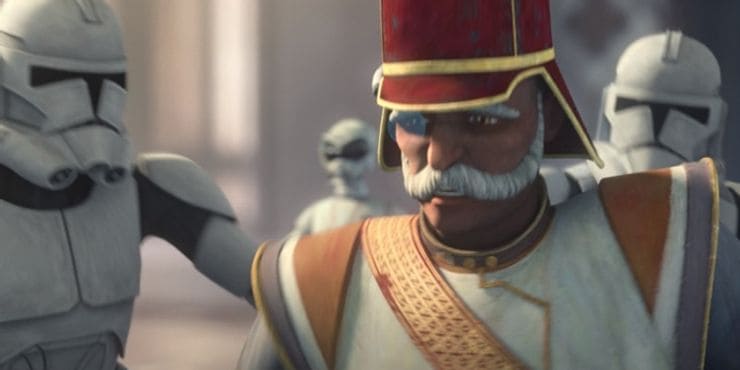 **SPOILERS for The Bad Batch Episode 10 (“Common Ground”) ahead**

This time, the elite squad of clone troopers is supposed to visit Raxus. For Star Wars: The Clone Wars fans, that’s the same Raxus we first encountered in the 2010 Season 3 episode, “Heroes on Both Sides”.

Although Star Wars fans learned of the existence of the Separatist Senate in Star Wars: Episode III – Revenge of the Sith (2005), it wasn’t until The Clone Wars’ Padmé Amidala (Catherine Taber) and Ahsoka Tano (Ashley Eckstein) journey to Raxus to visit Amidala’s mentor Senator Mina Bonteri (Kath Soucie) that we begin to learn more about individual politicians’ motivations.

Some of them had good intentions, but none of them realized that they were being toyed with by Darth Sidious [Emperor Palpatine] and Count Dooku like they were dejarik pieces. Dooku looming over them during sessions as a giant hologram didn’t clue them in.

Since The Bad Batch is a direct spinoff of a four-episode Season 7 Clone Wars story arc featuring Clone Force 99, it is fun to see the Easter eggs that have been popping up throughout the series so far, Raxus being the most recent. Previously, for example, we’ve seen several Clone Wars characters, the Martez sisters — Trace and Rafa — and Captain Rex, return.

Related: A Surprising ‘Star Wars’ Character Is the New “Mandalorian”

In the latest episode of The Bad Batch, Imperial Captain Bragg (Shelby Young) attempts to enlist one of the only living senators, Avi Singh, to help her bring the populous on Raxus around to the Galactic Empire’s way of thinking. He isn’t having it and sends a message to Cid, which, in turn, prompts her to send Clone Force 99 on a rescue mission.

In Clone Wars, Tano, who is intensely distrustful of the Separatists, eventually discovers that being in the Senate does not necessarily mean a person has evil intentions. The Bad Batch uses clone trooper Echo for this purpose — the former “reg” convinces his companions that they should accept the mission (not that they have much of a choice given their Martell Mix debt)

First-generation Jango Fett clone Omega isn’t allowed to go to a “planet crawling with Imperials”, but the rest of the squad takes off to secure Singh. The best part of this mission? Sci-fi fans should be very familiar with the voice actor behind the Senator.

Siddig portrayed Doctor Julian Bashir in all seven seasons of Star Trek: Deep Space Nine. Bashir himself had experience with DNA resequencing in DS9 and could probably help solve all the mysteries on Kamino in some sort of wild crossover.

Siddig isn’t the first Star Trek alum to join the Star Wars universe. The ever-popular George Takei (Hikaru Sulu) made an appearance in Season 1 of The Clone Wars as another Separatist, Neimoidian General Lok Durd.

While Siddig’s character probably won’t return to The Bad Batch — though one never knows in the Star Wars universe (we never expected to see Jedi Knight Luke Skywalker in The Mandalorian either) — it’s always fun to see the worlds of Star Trek and Star Wars collide, even in small ways.

Did you realize there was a Star Trek cameo in this week’s episode of animated series The Bad Batch?