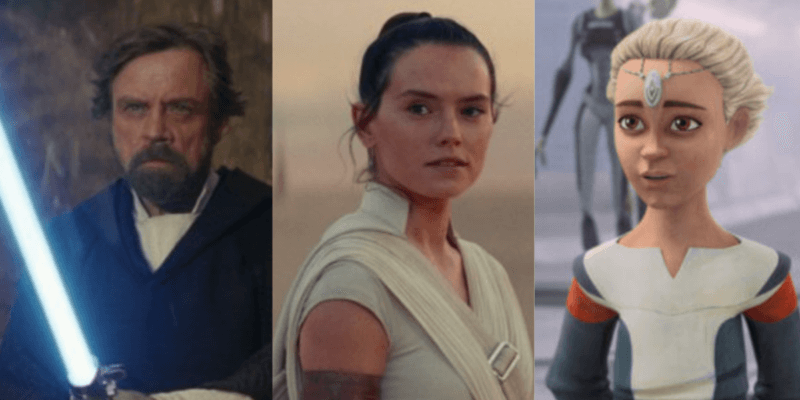 It has been just over a year since Daisy Ridley’s Rey uttered the words “Rey Skywalker” at the end of the Star Wars sequel trilogy. For some this was a full-circle moment, cementing the Skywalker name as the ultimate symbol of good. For others it proved to be anti-climatic, wrapping up the forty-decade long saga in an uninspiring, stale way.

What the sequel trilogy did do though, was show that Star Wars is first and foremost what George Lucas always wanted it to be — a family opera. Now, many years on since the galaxy’s inception, Lucasfilm is proving that despite the backlash, the Skywalker Saga will never truly end.

Lucas brought us Star Wars back in 1977 when he debuted Star Wars: Episode IV – A New Hope. The first installment in what would become 11 movies and multiple television spinoffs, introduced the world to Luke Skywalker. Plucked from relative obscurity, Mark Hamill originated the iconic hero and went on to star in every Skywalker Saga sequel since the seventies. He even came back — albeit via CGI — in Jon Favreau’s The Mandalorian Season 2, proving there is nowhere Luke Skywalker can’t be.

With a seemingly sloppy story that left much to be answered, JJ Abrams’ return to the Star Wars franchise came under fire, as did Lucasfilm President Kathleen Kennedy — who Star Wars seems to be distancing itself from with its newest projects.

That being said, Lucasfilm’s latest outings on the small-screen — The Mandalorian and Star Wars: The Bad Batch — are doing interesting things for the Star Wars galaxy. Favreau’s The Mandalorian introduced the world to Pedro Pascal’s Din Djarin and Grogu AKA “Baby Yoda”, and with two seasons already released and another on the way, it seems fans can’t get enough of the gunslinging space western.

More recently though, Dave Filoni’s The Bad Batch has been delving into a post-Order 66 world, dealing with the aftermath of Chancellor Palpatine’s executive order and navigating a rapidly changing galaxy. It also spotlights Clone Force 99 (voiced by Dee Bradley Baker), the eponymous “Bad Batch”, and their mercenary missions in the new Galactic Empire. While Filoni’s show could have just become a battle royale of clone supersoldiers vs. the old clone army, the arrival of the mysterious Omega (Michelle Ang) proves The Bad Batch still captures the heart of the Star Wars franchise.

Speaking to StarWars.com, head writer and executive producer Jennifer Corbett discusses the need for an emotional anchor in the new Disney+ series which debuted on Star Wars Day (May 4) this year.

“The interesting challenge was: How do you challenge a super soldier?”

Corbett goes on to reveal how The Bad Batch team decided to tackle this unique problem.

“And what can you throw at them that’s something that they’re not equipped to deal with? That’s how the idea of Omega came to be. Soldiers can figure things out, but what they’ve never had to deal with is a young kid. And that completely changes how they relate to one another and changes their perspective on the galaxy….You drop them into a Separatist battlefront and they’re going to be fine no matter what. But having to be guardians and be responsible for the upbringing and rearing of a child is something totally different.”

So while Omega’s character may also be hinting at Force-sensitive cloning on Kamino — the Kaminoans are desperate to get the young clone back — her nature as the ward of Clone Force 99 poses a heightened risk for the unique squad of experimental clones. They have only ever had to worry about each other, and even then their genetic mutations make them a formidable crew both in a unit and alone, but the addition of Omega — and by association, the addition of a family unit — gives Clone Force 99 someone to fight for.

The Bad Batch isn’t hiding from this either. We have seen over the last seven weeks that the latest Star Wars show is playing up the family element. First with Hunter and Omega, after the former rescued the young clone from Kamino and the throes of Admiral Tarkin, later going on to save her from the clutches of Fennec Shand (Ming-Na Wen). And then again with Wrecker — their burgeoning friendship was challenged in Episode 7 “Battle Scars” when Wrecker’s clone trooper inhibitor chip activated, making him turn on his squad.

Star Wars‘ need to delve into family relationships and family politics are as inherent to the franchise as a lightsaber-wielding Jedi Knight — this new show is challenging our perception of what a Star Wars family looks like. Sure, we have had found-family units before like in Filoni’s Star Wars Rebels and Star Wars Resistance, but with The Bad Batch — at least for the time being — the family is not about the Skywalkers, and not about the progression of the Star Wars franchise through a Skywalker lens. The Clone Wars in its broadest sense tackled Anakin Skywalker’s fall to the dark side, for example.

There are two sides here. The Bad Batch might be honoring the legacy of the Skywalker name and what that says about family by making the animated series inherently about family. Or, it could signal a turning point in the franchise by highlighting that fans can still care about family relationships without the need for a Skywalker involved.

It will be interesting to see if the next live-action, The Book of Boba Fett, will continue the family theme — if the bounty hunter is avenging Jango Fett’s death, it will surely be intense.

Who is your favorite Star Wars family? Let us know in the comments!