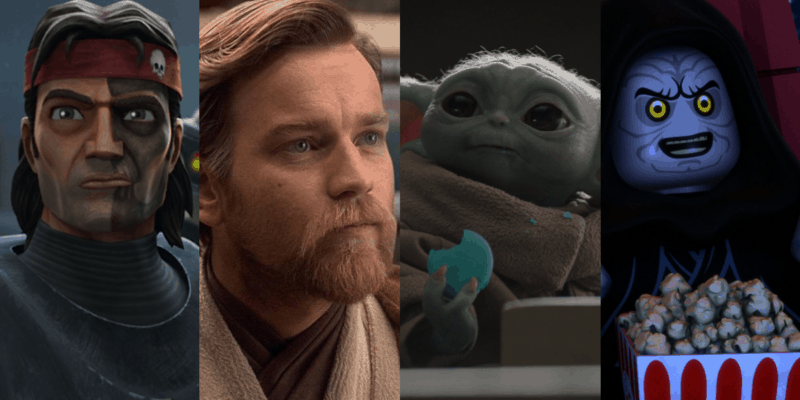 Star Wars has enjoyed a recent surge in popularity thanks in large part to the critical success and fan love for the Disney+ series from showrunners Jon Favreau and Dave Filoni,  The Mandalorian — starring Pedro Pascal and the beloved “Baby Yoda,” Grogu. The Season 2 finale episode of The Mandalorian not only gave fans a thrilling Luke Skywalker (Mark Hamill) cameo, but also a post-credits scene and title card of the first “Mando-verse” spin-off, The Book of Boba Fett (December 2021).

With an aggressive development slate on deck for Disney+ — including the debut of hotly anticipated series like Obi-Wan Kenobi and Ahsoka — is Lucasfilm concerned about Star Wars oversaturation?

Related: Production Details Suggest Mandalorian Season 3 Is STILL Over a Year Away

On top of The Book of Boba Fett, Disney announced an additional 9 Star Wars projects for Disney+ at their Investor Day 2020 — with several series like Obi-Wan Kenobi, Andor, The Bad Batch Season 2, and Ahsoka at various stages of production. With The Mandalorian Season 3 also in the works, and two Star Wars feature films on the way is Lucasfilm concerned that fans could burn out?

In a new interview, Lucasfilm VP, and producer of Star Wars: Visions, James Waugh says Lucasfilm is “mindful” of Star Wars oversaturation, but not necessarily concerned.

Speaking to The Direct, Waugh was asked about the possibility of Star Wars oversaturation — a very real concern for Lucasfilm in the recent past. With the perceived waning fan interest in the sequel trilogy’s The Last Jedi (2017) coupled with the disappointing box office performance of Han Solo origin, Solo: A Star Wars Story (2018), Disney’s then-CEO Bob Iger felt Disney needed to shift their strategy. Disney and Lucasfilm opted to pare back it’s development slate of Star Wars films after the release of The Rise of Skywalker (2019).

This week at the Goldman Sachs Communacopia Conference, Disney CEO Bob Chapek warned investors that 4th quarter subscriber gains for Disney+ will not be as robust as initially projected. Chapek cited a surge in the delta variant COVID-19 cases as a reason for delays in production of new content for the streamer.  Following Chapek’s comments Disney shares — healthy throughout the pandemic — dropped  more than 4%.

However, Disney boss Chapek sees a commitment to Disney’s flagship properties — like Star Wars and Marvel Studios — will continue to drive growth on balance, saying that for Disney+, “…the quarter-to-quarter business is not linear,” adding, “…what we are finding out as you’ve seen from our last several quarters in terms of our earnings, is that these numbers tend to be a lot noisier than a straight line.”

Chapek went on to announce “Disney Plus Day” on November 12 to highlight the new content coming to the platform, and offer exclusive offers to subscribers. Chapek said of Disney Plus Day,

“It will be this ultimate crescendo of everything that’s magical about the Walt Disney Company, and really starting to use Disney+ as this companywide platform that goes beyond a movie service.”

With an impressive line up for the special event that includes Marvel’s Shang-Chi and the Legend of the Ten Rings (2021), and the Dwayne Johnson led hit film Jungle Cruise (2021), Disney+ Day will also feature a Star Wars special “celebrating the origins and legacy of legendary bounty hunter, Boba Fett.”

Lucasfilm VP Waugh referred to upcoming Disney+ anime Star Wars series Visions as the type of project that was different enough from what has come before to be a truly unique experience, saying,

“When it comes to things like Visions, I would say that we weren’t ever concerned about the oversaturation potentiality with Visions in particular, and I think the reason was we were offering something that’s kind of a diversification of what the offering is… We weren’t concerned that this was going to impact Star Wars in aggregate, we thought this would be a breath of fresh air for people to explore Star Wars in an exciting new way.”

Waugh also stated that the production house is conscious of keeping the Star Wars franchise special for fans, saying,

“Are we worried about oversaturation? I think we’re always very thoughtful and cautious about how do we keep Star Wars’ specialness in this landscape. We’re mindful, but this wasn’t one of those instances where we had our Spidey-senses on a lot because we felt this was such a new offering.”

Much like the Marvel Cinematic Universe, Star Wars is looking to build on the success of Disney+ series with an ever expanding galaxy of new content. The Obi-Wan Kenobi series picks up the action after the events of Episode III – Revenge of the Sith (2005) and will reunite prequel trilogy stars Ewan McGregor and Hayden Christensen. Andor is a prequel to the Rogue One (2016) film starring Diego Luna as Cassian Andor.

Related: The Surprising Reason Mara Jade Skywalker Wasn’t in ‘Return of the Jedi’

Below is a list of Star Wars projects currently in the pipeline for Lucasfilm:

What do you think? Is there such a thing as too much Star Wars? Let us know in the comments!

Comments Off on Too Much ‘Star Wars’? Lucasfilm “Mindful” of Disney+ Oversaturation