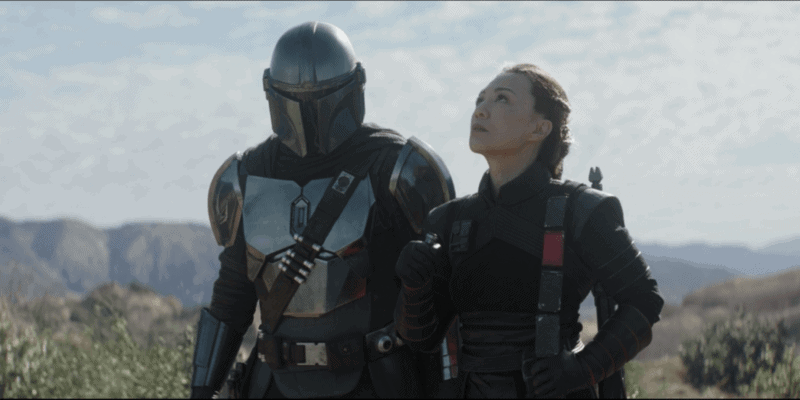 The Star Wars universe is all about family — after all, what would the Skywalker Saga be without the Skywalkers? — but, when it comes to some of the franchise’s newer characters, we lack the family tree we have for Luke Skywalker (Mark Hamill), Princess Leia (Carrie Fisher), Anakin Skywalker/Darth Vader (David Prowse/James Earl Jones, Hayden Christensen), and their blood relations.

The character showed up again in The Mandalorian Season 2, this time as Boba Fett’s (Temuera Morrison) right-hand woman, and an unlikely ally of Djarin’s when Grogu (AKA “Baby Yoda”) was kidnapped by Moff Gideon’s (Giancarlo Esposito) Dark Trooper droids on planet Tython in “Chapter 14: The Tragedy”.

Suffice it to say that Shand — who is also returning alongside Morrison’s Fett in The Book of Boba Fett this December — doesn’t seem to be going anywhere anytime soon.

And, now, some astute Star Wars fans have noticed that the Lucasfilm team may have been teasing Fennec Shand’s existence well before we first met her in The Mandalorian in 2019.

In TFA, [Star Wars: Episode VII – The Force Awakens (2015)] we see two criminal organisations (Kanjiklub and The Guavian Death Gang) confront Han Solo over debts Han failed to pay. One of the members of Kanjiklub is called Crokind Shand. Not much is known about the character, but he does share a few similarities to Fennec Shand. His name, his lifestyle, his psychology, and also how he was raised. From what we’ve seen of Fennec Shand, I can easily imagine a member of the Shand family dumping their child on some random planet and forcing him into a life of crime. Fennec Shand’s womb has been replaced with cybernetics, so it seems unlikely Crokind would be her son, but Crokind could be the son of a potential sibling or cousin of Fennec.

I know a lot of people are going to immediately jump to the comments of this post and say “not everybody in the Star Wars universe needs to be related”. I don’t understand why people say this… Luke and Leia were revealed to be twins in ROTJ [Star Wars: Episode VI – Return of the Jedi (1983)], and since then people have been pushing this idea that everybody in the galaxy is related to someone else. Sure, Rey was revealed to be a Palpatine in episode 9 [Star Wars: Episode IX – The Rise of Skywalker (2019)], but this idea that ‘everyone in Star Wars is related’ has been around way before the release of TROS. In this post, I’m not trying to retcon two random main characters to be relatives, with no evidence. These two characters do share quite a few similarities. And it’s nothing lore-breaking, Crokind Shand is only a background character.

Could there be some truth to this, or am I just completely wrong? What are your thoughts?

Could Fennec Shand be related to Crokind Shand? from starwarsspeculation

The first commenter, YungBeard, agreed with the assessment:

I understand people not wanting/needing characters to be related to one another, but in this case – specifically because of the last name – it seems pretty likely

The original poster responded, noting that the potential connection is a nice Easter egg, of sorts, for fans who enjoy making connections between various Star Wars movies and series:

TLM86 doesn’t think we’ve seen the last of Crokind Shand, presuming the character — and his connection to Fennec — will ultimately make its way into the Star Wars story:

Yep, I assume that link’s going to pop up somewhere official at some point. I’d definitely imagine Pablo [Pablo Hidalgo] already put it in his cancelled/postponed Mando Visual Guide, since there’s a fair chance he named Crokind in the first place.

Again, the original poster shared thoughts on this reply:

Yeah. Crokind Shand’s name was revealed in the TFA visual dictionary, so I assume Pablo came up with the name. He probably included some line in the Mando visual guide’s Fennec Shand page saying something like ‘her family’s legacy would at least last to 34 ABY, where her nephew Crokind Shand confronted the veteran smuggler Han Solo, an old enemy of Fennec’. Idk, maybe I’m wrong, but I can easily imagine something similar to that was written.

For now, all we can do is wait and see where Favreau and Filoni’s “Mando-verse” will take us next, but with the ever-expanding Star Wars universe — including The Bad Batch Season 2, The Mandalorian Season 3, The Book of Boba Fett, and Rosario Dawson’s Ahsoka — there is plenty of room for new stories to be told and new characters to make their way into a galaxy far, far away.

What do you think? Will we learn more about Fennec Shand’s connection to Crokind Shand?