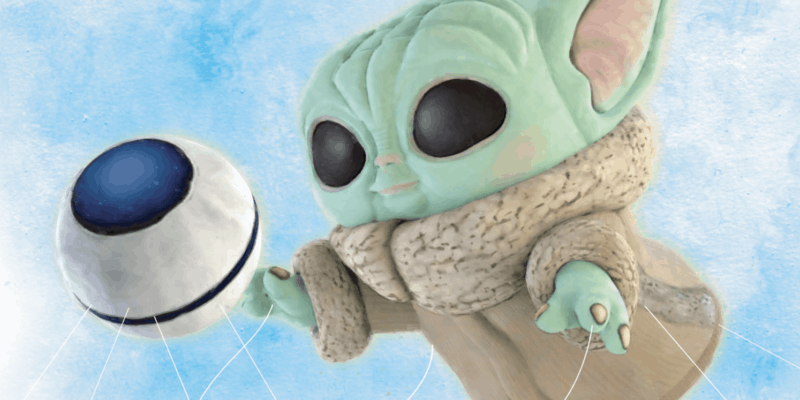 There are few things more quintessentially American than watching the Macy’s Thanksgiving Day Parade while the smells of turkey and pumpkin pie waft through the house. And, now, the most popular parade in the United States — which will celebrate its 95th anniversary — is about to take us to a galaxy far, far away.

This morning, StarWars.com confirmed that bounty hunter Din Djarin’s tiny foundling is about to get a lot bigger:

Funko and Macy’s, in collaboration with Lucasfilm, announced today that Grogu, our favorite mysterious, adorable, and tiny Force-sensitive being from The Mandalorian, will debut as a massive Funko Pop!-inspired balloon at the 2021 Macy’s Thanksgiving Day Parade on November 25. An original design by Funko art director Reis O’Brien created just for the parade, the balloon brings Grogu to life in the cute Pop! style of collectibles.

“We’re no strangers to the thrill of translating Star Wars characters into the Pop! form. Thanks to the strong creative relationship with Lucasfilm, we knew we could develop a fun, charming and iconic moment. After a crash course in how the Macy’s balloons are constructed, we started the creative process inspired by everyone’s love for Grogu. His giant ears were an unexpected challenge of their own, but once we finally got a peek at the final result we knew that all of our hard work and collaboration had paid off. There’s going to be a whole lot of cuteness floating above the streets of New York City come Thanksgiving morning.”

From the concept art posted on the official Star Wars Facebook page, it appears that “Baby Yoda” will be joined by his famous pod stroller:

A larger-than-life Funko Pop! balloon inspired by Grogu will be taking flight in the 95th Annual Macy’s Thanksgiving Day Parade®

As for the actual Grogu in The Mandalorian, when we last saw him, he was leaving with iconic Jedi Knight Luke Skywalker (CGI Mark Hamill) to complete his Jedi Order training.

Skywalker swooped in to save Djarin, Cara Dune (Gina Carano), Fennec Shand (Ming-Na Wen), Koska Reeves (Sasha Banks), and Bo-Katan Kryze (Katee Sackhoff) from Moff Gideon (Giancarlo Esposito) and his Dark Trooper droids, he shocked everyone by also departing the Imperial cruiser with Grogu and R2-D2 alongside him.

Although we don’t yet know for certain where Grogu will appear next, in addition to The Mandalorian Season 3, there are two known Mandalorian spinoff shows — The Book of Boba Fett and Ahsoka — in the works — Gina Carano’s Rangers of the New Republic is not in “active development” — and a rumored Luke Skywalker series coming down the pipeline, there is plenty of room for all of the stories The Mandalorian saga needs to tell.

The Book of Boba Fett will air in December 2021 and Ahsoka is expected to air concurrently with The Mandalorian Season 3 sometime in 2022.

Are you excited to see this new Macy’s Star Wars balloon soar above the streets of New York City?

Comments Off on Grogu Is “Taking Flight” in the Macy’s Thanksgiving Day Parade!