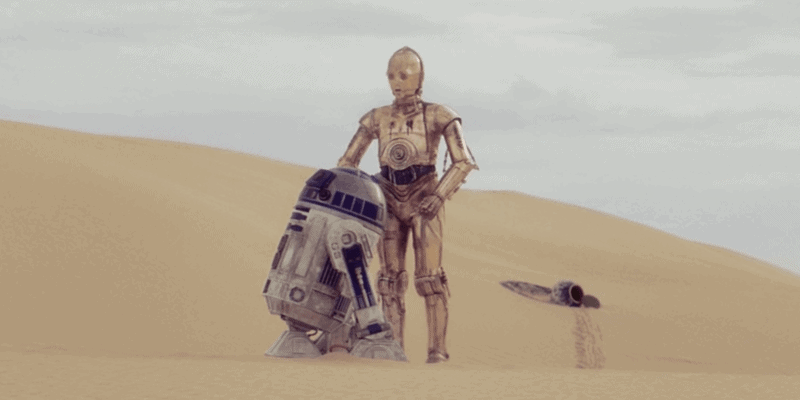 It seems news from the Obi-Wan Kenobi camp is starting to ramp up. The new special event series for Disney+ will be directed by Deborah Chow — who recently directed episodes for Jon Favreau’s The Mandalorian. Set to debut next year, Star Wars fans already know most of the cast and it’s stellar, to say the least.

One iconic duo, however, was missing from the line-up. Sure, R2-D2 and C-3PO don’t need to make an appearance in every Star Wars project but it seems a shame to have Tatooine and characters like Obi-Wan Kenobi and Darth Vader without the famous pair. Well, a new report now suggests that the droids made famous by Anthony Daniels (C-3PO) and Kenny Baker (R2-D2) will be starring in the new series.

The Obi-Wan Kenobi series will join the staggering amount of other projects like Ahsoka, Cassian Andor’s titular series, Andor, and Lando, coming from Lucasfilm in the next few years. While the plot details are being guarded with as much ferocity as Din Djarin and Boba Fett protecting Grogu on the seeing stone, we do know that Obi-Wan Kenobi will be set 10 years after the historic events of Star Wars: Episode III – Revenge of the Sith (2005), and before Alec Guinness’ turn as Obi-Wan in the original trilogy.

Bringing Ewan McGregor back as the titular Jedi Knight, the series also sees Hayden Christensen reprising his role as Anakin Skywalker AKA Darth Vader as well as Joel Edgerton and Bonnie Piesse as Owen and Beru Lars, respectively. The rest of the cast is strong too with Game of Thrones star Indira Varma starring in what looks like an Imperial role, and Moses Ingram, Rupert Friend, Kumail Nanjiani, O’Shea Jackson Jr., Sung Kang, Simone Kessell, Benny Safdie, and Maya Erskine also featuring in the new Star Wars series.

Recently, it has been reported that Obi-Wan Kenobi will feature a young Princess Leia who will allegedly be played by Vivian Lyra Blair (Birdbox). In addition, Sung Kang’s role has been teased as being the Fifth Brother — marking the character’s live-action debut following his appearance in the animated series, Star Wars Rebels. And then there’s Moses Ingram, who very early on in the production process teased intense lightsaber action as part of her character within the show — with some even suggesting she may be playing a version of The Clone Wars‘ favorite, Ahsoka Tano.

If that cast doesn’t get you excited for this new chapter in the Star Wars universe, then a new report also points to the world-famous droid duo, R2-D2 and C-3PO also appearing in the series.

Yes, it makes sense if Leia is around, so might Artoo and Threepio be? However LRM can exclusively reveal that both Artoo and Threepio will make an appearance within Obi-Wan Kenobi. Again we cannot say how big a role they have, but they are in it.

As Star Wars continues to connect its expanding saga, it wouldn’t be strange to see the droids turn up in this pre-original trilogy era. The characters both had starring roles in George Lucas’s prequel trilogy too, with C-3PO’s origins being revealed in Star Wars: Episode I – The Phantom Menace (1999).

It makes sense that if Princess Leia is appearing in the Obi-Wan Kenobi television series that C-3PO and R2-D2 will be too. However, their appearance here suggests they potentially won’t interact with McGregor’s Obi-Wan due to C-3PO’s memory wipe at the end of the Star Wars prequel trilogy. But, chances are a young Luke Skywalker will show up if Owen and Beru are playing a big part in the limited series.

With Leia safely in the hands of Bail Organa on Alderaan, the droid duo — if they do appear — will most likely feature alongside the young Princess Leia in this new Star Wars story as she makes her way in the newly established Galactic Empire.

Would you like to see C-3PO and R2-D2 in Obi-Wan Kenobi? Let us know in the comments!