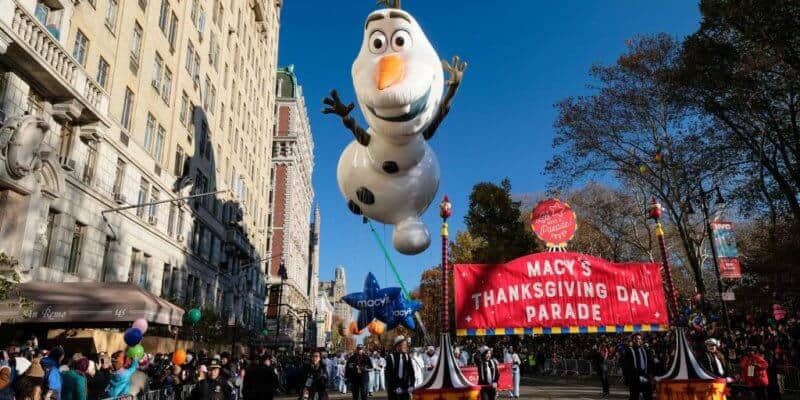 Another year, and another run of Macy’s Thanksgiving Day Parade! This annual American tradition takes over the streets of New York City and is an unforgettable experience for the whole family. But in the midst of the amazing lineup of balloons, floats, and performers are two Frozen favorites. In case you missed them, here they are:

Happy Thanksgiving! Check out #Olaf’s special appearance at the #MacysParade and see Olaf in #Frozen2, now playing in theaters! pic.twitter.com/hjSlA6JSFe

Related: Josh Gad explains why Olaf’s maturity is so important in “Frozen 2”

According to Macy’s official website, the Olaf balloon stands 60-feet tall! That is 16 times the size of the real Olaf and stands more than 2 stories taller than Walt Disney Animation Studios.

The broadway sensation and the voice behind the one and only Queen Elsa of Arendelle appeared to do a live performance of the Frozen franchise anthem: “Let it go.” Menzel was found singing aboard the “Deck the Halls” float presented by Balsam Hills. The float is dressed as a winter wonderland featuring Balsam Hills tress and over 300 feet of garland.

Frozen 2 has been in theaters now for over a week and the sequel has more than lived up to its predecessor. The movie has smashed box office records, breaking $120 million in its domestic box office debut, and has earned the praise of both critics and audience. Without giving anything away, Frozen 2 has us rejoin Elsa, Anna, Kristoff, Olaf and Sven on an adventure far beyond the castle gates where the strength of the young queen and her sisterhood will be put to the test like never before.

Idina Menzel and Olaf appeared in the 93rd running of the Macy’s Thanksgiving Day Parade.

Did you catch Olaf and Idina Menzel this year? Have you seen the Macy’s Thanksgiving Day Parade in person before? Let us know in the comments!

Comments Off on ICYMI: Frozen Moments at the 93rd Macy’s Thanksgiving Day Parade