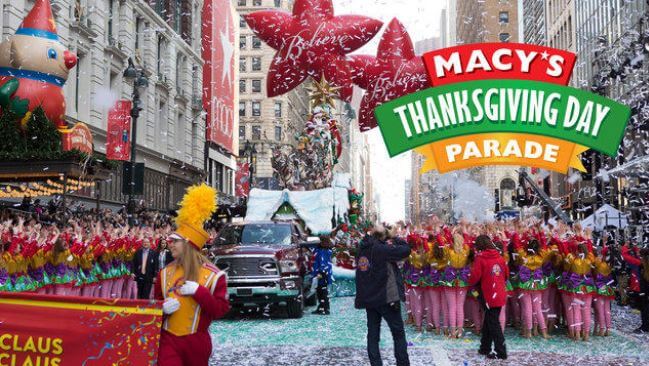 For 92 years Macy’s magic mesmerized millions while ushering in the Christmas Season. The Macy’s Thanksgiving Day parade brings a host of holiday acts, floats, marching bands, giant balloons, and, of dire importance to young viewers – the arrival of Santa Claus.

Larger than life balloons from the parade continue to cast their spell for scores of guests visiting Central Florida. Continuing the excitement of this enigmatic experience every year since 2001, Universal Orlando Resort (owned by parade TV broadcaster NBC) ports the parade (redubbed, “Macy’s Holiday Parade”) to its park for annual arrivals of the infamous balloons and, ultimately, the Jolly Ol’ Elf himself.

The first Thanksgiving Day parade didn’t take place in New York City.  Instead, the floats, clowns, zoo animals and marching bands wound their way through the streets of Philadelphia as part of the Gimbels Department Store in 1920. Lois Bamberger, liked the idea and soon followed suit in Newark, New Jersey with his own holiday marching magic. Bamberger’s Department Store was acquired by Macy’s in 1922 and the parade was moved to New York City to become the very first Macy’s Christmas Parade two years later. 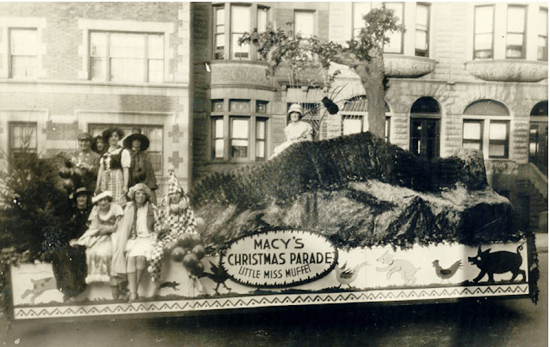 The 1924 parade was a grueling six miles long and ended at Herald Square for Santa’s arrival and transition from the parade to his magical kingdom within the Macy’s Department store. Featured in the festivities were marching bands, fantastic floats, clowns and a menagerie of 5 animals on loan from the Central Park Zoo. The zoo animals were given a break after a few years when giant balloon floats replaced them in 1927, which were crafted by the Goodyear Tire and Rubber Company. 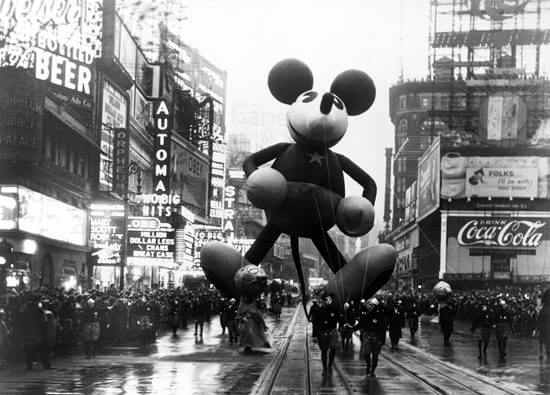 Ever since the live zoo animals were replaced by helium-filled, larger-than-life flying characters in 1927, they have been featured in every Macy’s Thanksgiving Day Parade ever since. In the early years of the parade, these were set free at the conclusion of the event. Today, the balloons are a bit smaller than those of earlier years. Superman (1966) was the largest ever. Since 1984 these have been manufactured by Raven Aerostar. 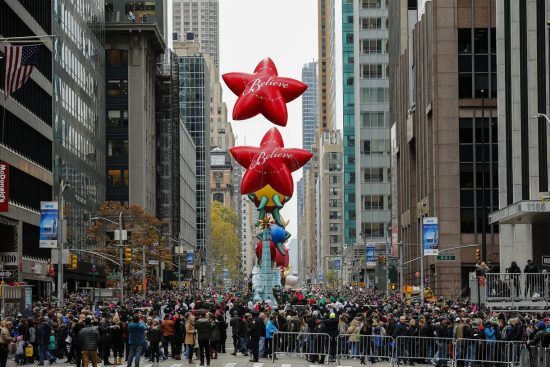 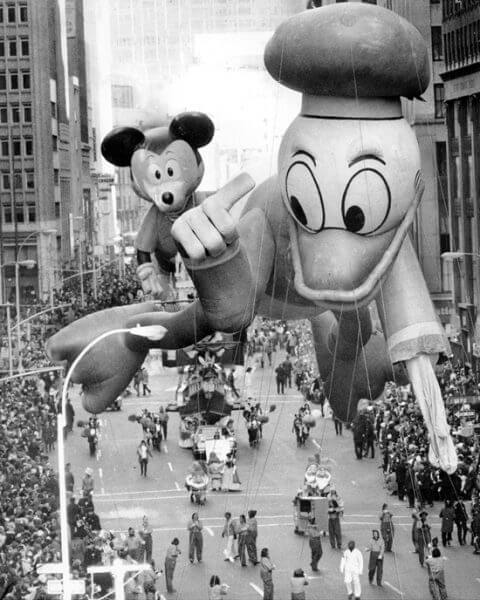 Safety first! While there have been three instances of these giant helium-filled characters getting out of control, no one has lost their life in any of the accidents. Now, if winds exceed 34 mph, the floating fantasies will not fly.

Another festive feature of the Macy’s Thanksgiving Day Parade is the amazing floats. Tom Turkey was added to the parade in 1971. Masters of the Universe and Rainbow Brite had their own floats in 1985. In 2005 the Polar Express and the 50th Anniversary of Walt Disney park magic could be seen gliding down the road. Universal Orlando Resort (2011) and Sea World (2013) have also been represented. 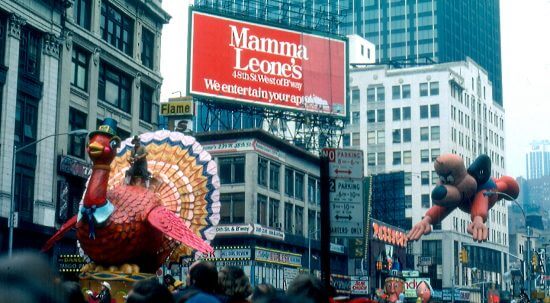 At the end of this seasonal spectacle, Santa Claus’ float brings the toy giver to Macy’s. 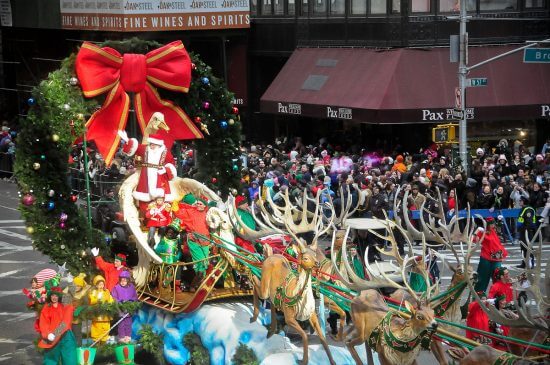 Musical acts and Broadway dance numbers have long been a big part of the parade. Featured on floats or as break-away entertainment, these acts have included Josh Groban, Kermit and Piggy, Harry Connick Jr., Jonas Brothers, The Roots, Straight No Chaser, KISS, Mannheim Steamroller, and many more, performing over the years.

Even monsters have their place in the Holidays – Herman and Grandpa from “the Munsters” escorted Santa Claus in the 1964 parade: 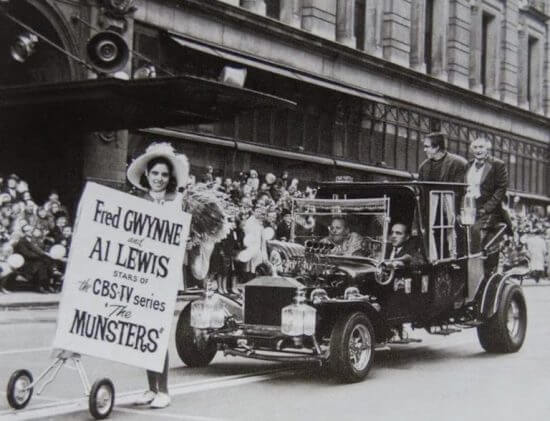 Usually appearing just before the start of the parade and as part of the televised event, a Broadway act will get the event underway. Shows like “Cats,” “Spamalot,” “Hairspray,” “Oklahoma,” “Wicked,” “42nd Street,” “Fiddler on the Roof,” “Mary Poppins,” “Young Frankenstein,” and “The Little Mermaid” have all been featured.

Ever since 1948, the National Broadcast Company (NBC) has broadcast the parade on television and radio (1951).  Initial broadcast actually happened two years earlier, but only locally. The coverage takes place along the parade route from Central Park to the main grandstand in front of Macy’s on Herald Square. Beginning at 9 am on Thanksgiving Day until noon, audiences across America suffered through the agonizing wait and aroma of Thanksgiving dinner cooking as the parade produced its holiday magic on the television. 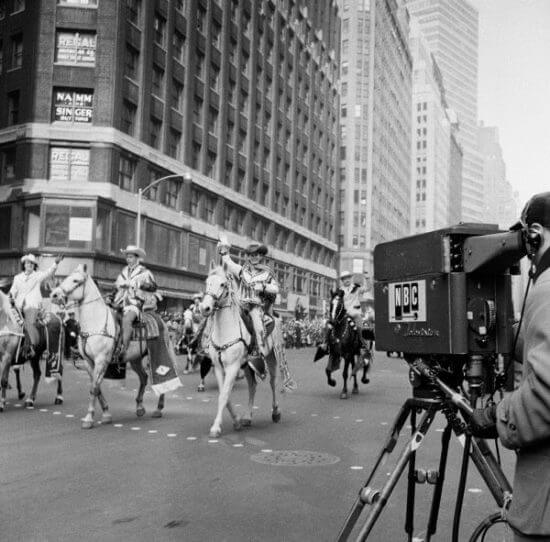 The event has been hosted by Betty White, Lorne Greene, Ed McMahon, Bryant Gumbel and Willard Scott in the past.  Current hosts include the TODAY Show’s Savannah Guthrie, Hoda Kotb and Al Roker. 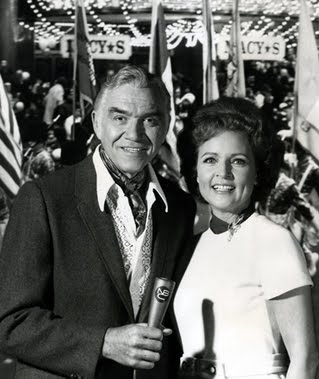 While the datelines of the holiday seem ever blurry (with Christmas merchandise arriving as early as July these days), the Macy’s Thanksgiving Day Parade, along with the Thanksgiving Holiday, is considered the official start of the Christmas Season. As the final float, carrying Santa Claus, pulls in front of Macy’s Department Store in Manhattan, Santa makes his way to his throne, entertaining (or enduring) thousands of children’s eager requests for holiday wishes – thus starting the Christmas crunch. 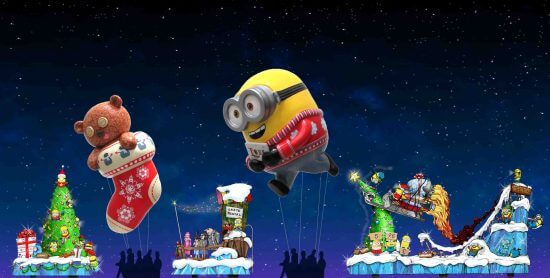 The parade, however, does not end with this much anticipated Macy’s arrival by Santa Claus.  Instead, or rather, in addition to this, the magic continues at Universal Orlando Resort with the advent of their Universal’s Holiday Parade Featuring Macy’s holiday event.  Running November 18th – January 8th, the event features floats and 13 balloons specially crafted by Macy’s.  Characters from “Despicable Me,” “Shrek,” “Madagascar,” “Minions” and more will be on hand to celebrate the season.  Of course, Santa and his elves will be there too!

On a personal note, the Macy’s Thanksgiving Day Parade was always on the TV from the moment my brother, sister and I woke up.  The “bird” was in the oven (and the smell of it cooking was mouth-watering torture). The whole family gathered for that inevitable turkey-induced food coma and all was right with the world for a day. 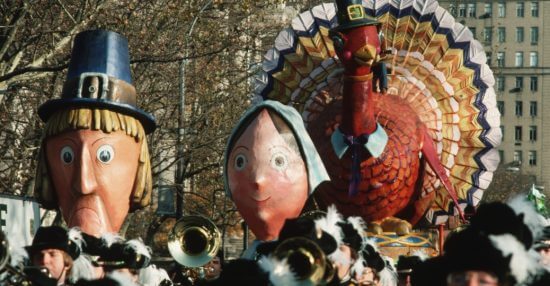