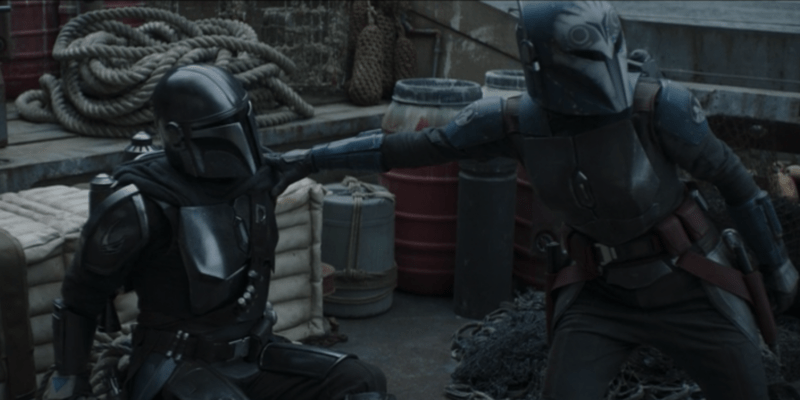 One of the stars involved in, arguably, the biggest unresolved issue from the Season 2 finale — the ownership of the Darksaber — has just weighed in on where the third outing of The Mandalorian may go.

With what seems to be a rather bumpy production schedule, The Mandalorian will reportedly be entering the filming process of its third season this month. After rumors here and there regarding when the fan-favorite show will get its Beskar-armored boots off the ground, actor Carl Weathers (Greef Karga) revealed that filming will begin very soon.

Weathers joined Pascal in The Mandalorian‘s first two seasons, and it is looking likely that he will be back for Season 3. The Emmy Award-winning show also featured the likes of Gina Carano (Cara Dune), Giancarlo Esposito (Moff Gideon), and Ming-Na Wen (Fennec Shand) as newcomers to the Star Wars universe. Season 2, however, provided much fanfare when it saw the live-action debuts of iconic The Clone Wars characters, Ahsoka Tano — played here by Rosario Dawson and not Ashley Eckstein — and Bo-Katan Kryze (Katee Sackhoff).

While Dawson’s Ahsoka Tano may reappear in The Mandalorian Season 3, chances are her story and hunt for Grand Admiral Thrawn, will continue in Ahsoka. In addition, Wen’s Fennec Shand will next be seen alongside Temuera Morrison’s Boba Fett in The Book of Boba Fett this December. The follow-up to Pascal’s bounty hunter series was teased at the end of The Mandalorian‘s Season 2 finale when Fett and Shand took Jabba’s Palace, killing those inside and taking the throne.

What angle The Mandalorian Season 3 may take has not yet been revealed. Din Djarin may take up a new job and get tied in with a new crime syndicate, or we could see a new battle for Mandalore, it really is wide open. One thing the series does have to address though is the ownership of the Darksaber. Djarin won it from Moff Gideon as his Dark Trooper squad descended on the heroes in the Season 2 finale, and while he doesn’t want to rule Mandalore, there is someone else that really, really does.

Speaking to Slash Film, Sackhoff claimed she isn’t privy to any of The Mandalorian‘s plot points so far but did suggest that one rather tense moment of the second season could come into play:

“The way that Lucasfilm left me in season 2, one of the roads that could be gone down — absolutely, you’d think — would be the unfinished business […] But that is so far above my pay grade, and you just don’t know, right? As a fan of the show, I’m just excited to see what they come up with.”

The unfinished business Sackhoff is alluding to here is, of course, her quest to become ruler of Mandalore. Bo-Katan Kryze first appeared in Bryce Dallas Howard’s “Chapter 11: The Heiress” and again in Peyton Reed’s “Chapter 16: The Rescue”. In Star Wars Rebels, Bo-Katan was gifted the Darksaber by Sabine Wren in the animated series, becoming the rightful ruler of Mandalore but in The Mandalorian we see Bo-Katan hunting for Moff Gideon and the Darksaber following the Great Purge.

Sackhoff also revealed that she and executive producer, Dave Filoni, discussed the history of her Clone Wars character and how Bo-Katan’s past might impact her in The Mandalorian timeline:

“Dave and I talk a lot about Bo and her backstory and time lost and things like that, just because we enjoy talking about Star Wars and the characters. I definitely know a lot about who she is and where she’s been and what’s happened. So, yeah, I knew that kind of stuff for sure.”

It will be interesting to see what direction The Mandalorian‘s next series does take. With The Book of Boba Fett being called “The Mandalorian Season 2.5″, and some rumors claiming that the title may change after Season 3 to be more reflective of the wider Star Wars story the show is telling, it really is an exciting time for Mando and Star Wars fans.

The Book of Boba Fett debuts in December while the non-canon, Star Wars: Visions releases this month on Disney+. Other new TV shows like Obi-Wan Kenobi and Ahsoka, are yet to receive a release date.

What do you think will happen in The Mandalorian Season 3? Let us know in the comments!