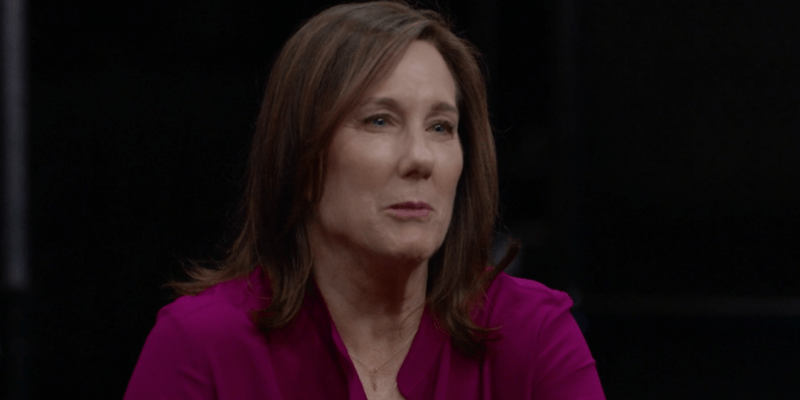 The Star Wars sequel trilogy is perhaps the most divisive of Lucasfilm’s Star Wars trilogies. Debuting with JJ Abrams’ Star Wars: Episode VII — The Force Awakens (2015), the sequels have become an incredibly controversial sequence of films in the Star Wars galaxy.

Eventually re-titled as Star Wars: Episode IV — A New Hope, the space opera went on to win many accolades including Best Costume Design, Best Original Score, and Best Film Editing at the 50th Academy Awards in 1978. For the latter, Lucas’ then-wife, Marcia Lucas, was part of the Oscar-winning team and it is Lucas that has spoken out on Kennedy’s sequels.

In JW Rinzler’s Howard Kazanjian: A Producer’s Life (2021), Lucas spoke on her issues with the Star Wars sequel trilogy, JJ Abrams, and Kathleen Kennedy. Via ComicBook:

“I like Kathleen. I always liked her. She was full of beans. She was really smart and really bright. Really wonderful woman. And I liked her husband, Frank [Marshall]. I liked them a lot. Now that she’s running Lucasfilm and making movies, it seems to me that Kathy Kennedy and J.J. Abrams don’t have a clue about Star Wars,” an excerpt of the book reads.

Kennedy took the reins of Lucasfilm after The Walt Disney Company’s acquisition of the Star Wars franchise in 2012 following a brief position as co-chair alongside George Lucas. She then took on launching Disney’s sequel trilogy.

“They have Luke disintegrate. They killed Han Solo. They killed Luke Skywalker. And they don’t have Princess Leia anymore. And they’re spitting out movies every year,” the retired filmmaker added. “And they think it’s important to appeal to a woman’s audience, so now their main character is this female, who’s supposed to have Jedi powers, but we don’t know how she got Jedi powers, or who she is. It sucks. The storylines are terrible. Just terrible.

Lucas is, of course, talking about Daisy Ridley’s Rey. She then ends with a bold remark:

Awful. You can quote me…JJ Abrams, Kathy Kennedy — talk to me.'”

Kennedy has been under fire from Star Wars fans since the sequel trilogy concluded with Star Wars: Episode IX — The Rise of Skywalker (2019), and over the past few months rumors have ramped up as to whether Lucasfilm darlings Jon Favreau and Dave Filoni will succeed Kennedy as President of Lucasfilm. As of yet, neither The Walt Disney Company nor Lucasfilm has made any additional statements regarding Kennedy’s future at the Star Wars studio since Disney CEO Bob Chapek confirmed she would be staying in her position earlier this year.

As for Abrams, the director alluded to the fact that the Star Wars sequel trilogy was not fully pre-planned before production began on the films was an issue for the sequels. Johnson continually comes under fire for his handling of the sophomore outing for the trilogy with Star Wars: Episode VIII — The Last Jedi (2017), despite the film being the most critically acclaimed of the three.

While the sequel trilogy was deemed a misfire by the Star Wars fandom overall, the recent additions of The Mandalorian and The Bad Batch have reignited the love for a post-sequel era Star Wars Universe at least in a non-timeline sense. There have been no projects in the Skywalker Saga released thus far that take place after the events of The Rise of Skywalker — The Mandalorian takes place around five years after Star Wars: Episode VI — Return of the Jedi (1983) and The Bad Batch takes place just after Star Wars: Episode III — Revenge of the Sith (2005).

Next up is the bounty hunter series, The Book of Boba Fett which is set to debut this December exclusively on Disney+.

What do you think of Marcia Lucas’ comments on the sequel trilogy? Let us know in the comments!